Looking for things to add to your Mexico bucket list? We have over 35+ things that will blow you away. As the top things to do in Mexico, this list will keep you busy!

Mexico is such a diverse country offering some of the most visited resort towns, amazing food, incredible cities, and a vibrant culture. We are positive Mexico should be on your travel bucket list and you will soon see why! 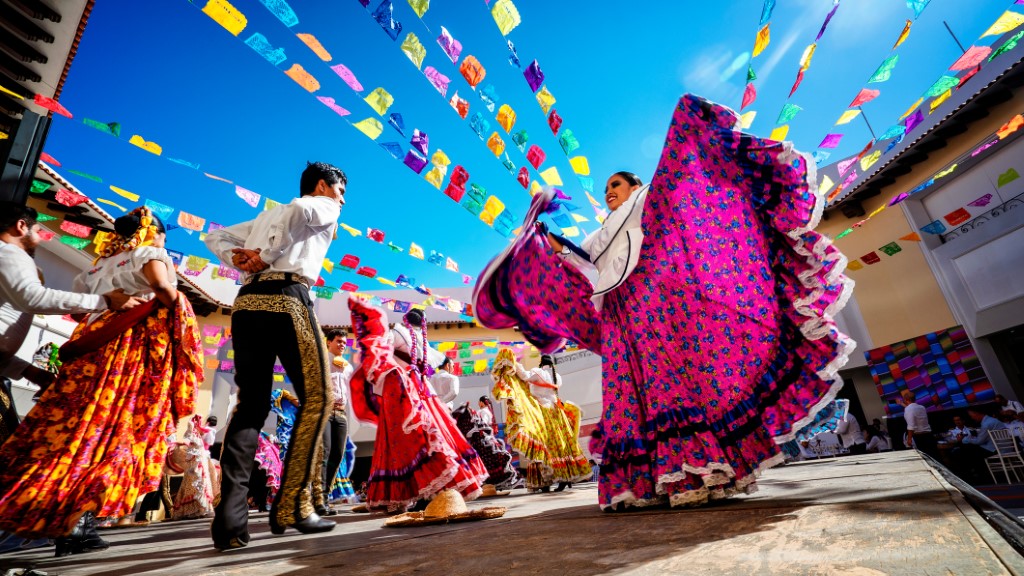 While many people had to Tulum to go relax on the beach, there’s a lot of history in the area. Be sure to check out the Tulum ruins, including the clifftop castle that the area is most well known for. The ruins here date back to the thirteenth century! 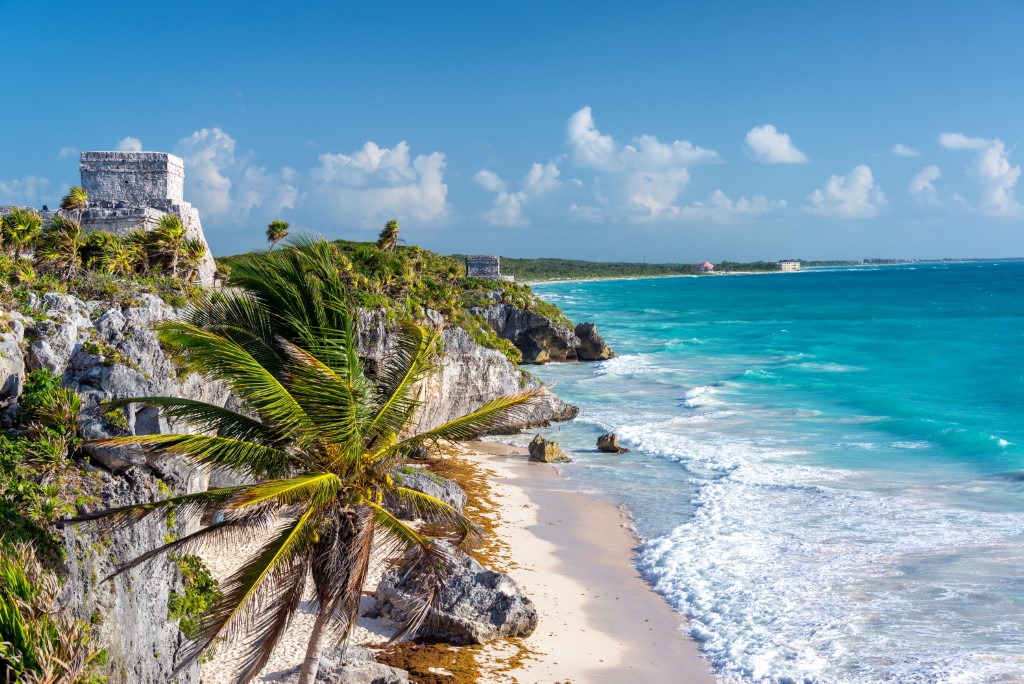 2. Peruse masterpieces at the Soumaya Museum

The Soumaya Museum is easily the most well-known art museum in all of Mexico. Located in Mexico City, the museum is filled with masterpieces, artifacts, and exhibits. The museum is free no matter the time of year, and it’s inside a beautiful architectural building.

A great city to explore on this Mexico bucket list is Campeche. It’s filled with colorful buildings and has a history dating back a few hundred years. The architecture here is also incredible, with a lot of the homes built in the colonial style. It’s located on the southern tip’s coast, near Guatemala. 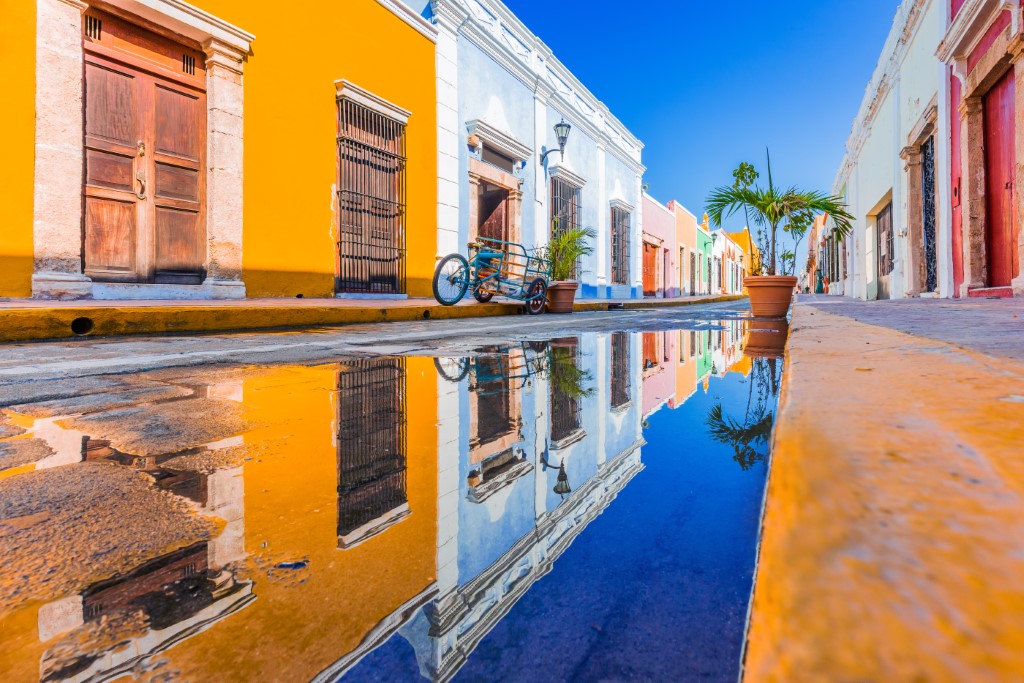 Las Pozas is a garden filled with sculptures created by Edward James, an English poet. It’s considered a sort of outdoor art museum. When you visit, you’ll feel like you’re inside another world! In addition to sculptures, there are lots of outdoor scenery, including waterfalls.

What better way to relax while in Mexico than by heading to the hot springs? They’re naturally heated and are incredibly beautiful. Keep in mind that this is one of the attractions on this Mexico bucket list that tends to get busy during peak season, so plan to visit first thing in the morning. 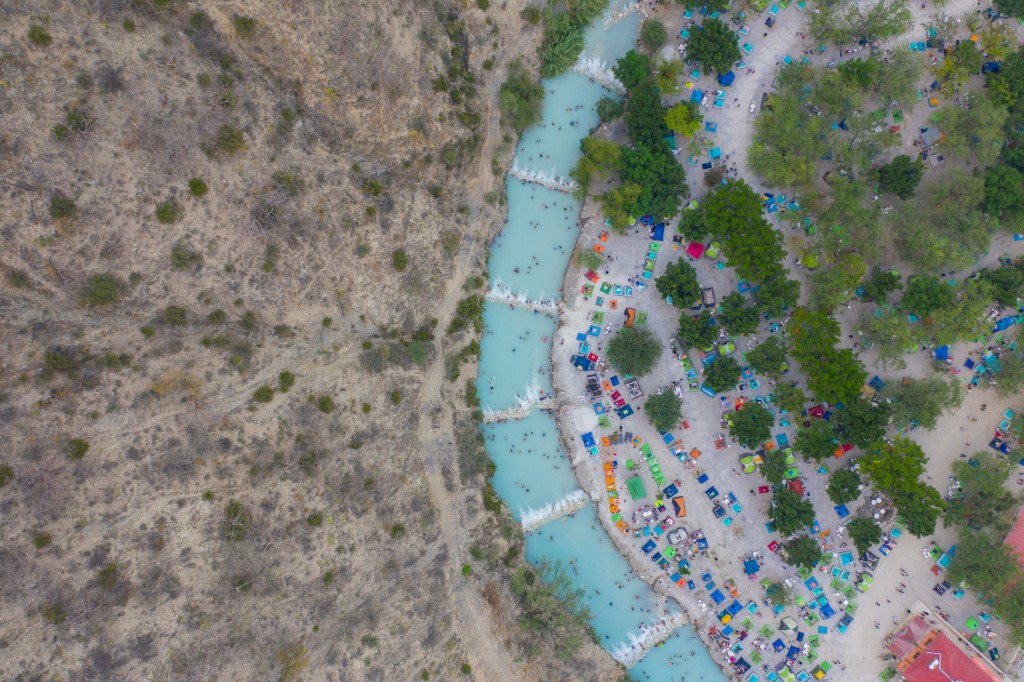 The Cancun Underwater Museum is one of the most unique museums in the world! It’s wholly underwater and is made up of sculptures that help protect sea life in the area. The only way to get there is to scuba dive. If you have your scuba diving certification, this is the perfect way for you to explore the area!

7. Find a cenote and swim in it

A cenote is basically a swimming area that’s usually filled with fresh water. They tend to form in areas where the ground has just completely caved in, giving them an otherworldly feel. Cenotes are all over Mexico, so if you want a magical experience, find one and go swimming in it at least once during your trip! Ik-Kil cenote is popular! 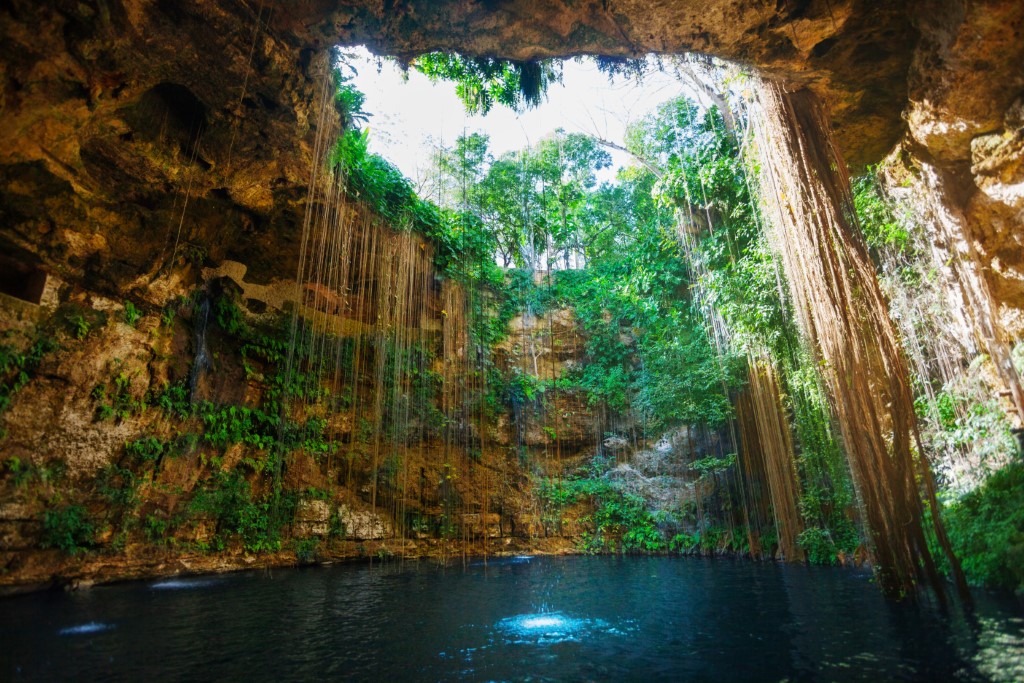 8. Find the Angel of Independence

The Angel of Independence is a monument statue located in Mexico City. It’s one of the top attractions in the city and is one of the more bustling neighborhoods, so it’s really hard to miss it. The monument was built in 1910 and has blessed the city ever since.

Tamales are a local dish in Mexico, so what better place to try it than while visiting! They can be purchased from so many different restaurants and street vendors throughout the country, so it doesn’t matter where you get them from. The more local the restaurant, the better they will probably taste! 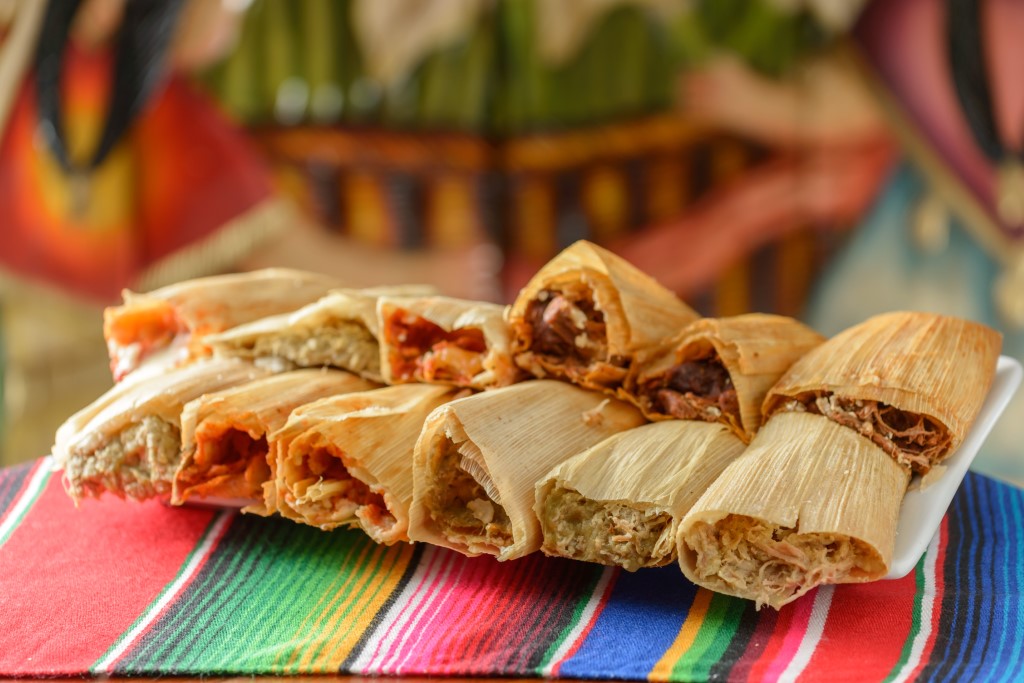 The Frida Kahlo Museum is easily one of the more unique attractions on this Mexico bucket list! It opened in the 1950s and showcases a lot of Frida Kahlo’s art, who was a Mexican artist. You can find it in Mexico City, and the striking blue color of its exterior will make it impossible to miss.

11. Step back in time at Chichen Itza

Chichen Itza is one attraction in Mexico that you can’t miss. It’s an ancient Mayan ruin built around 600 A.D. and served the city for thousands of years. This is one of the top archeological sites in the city and has history seeping from every corner. 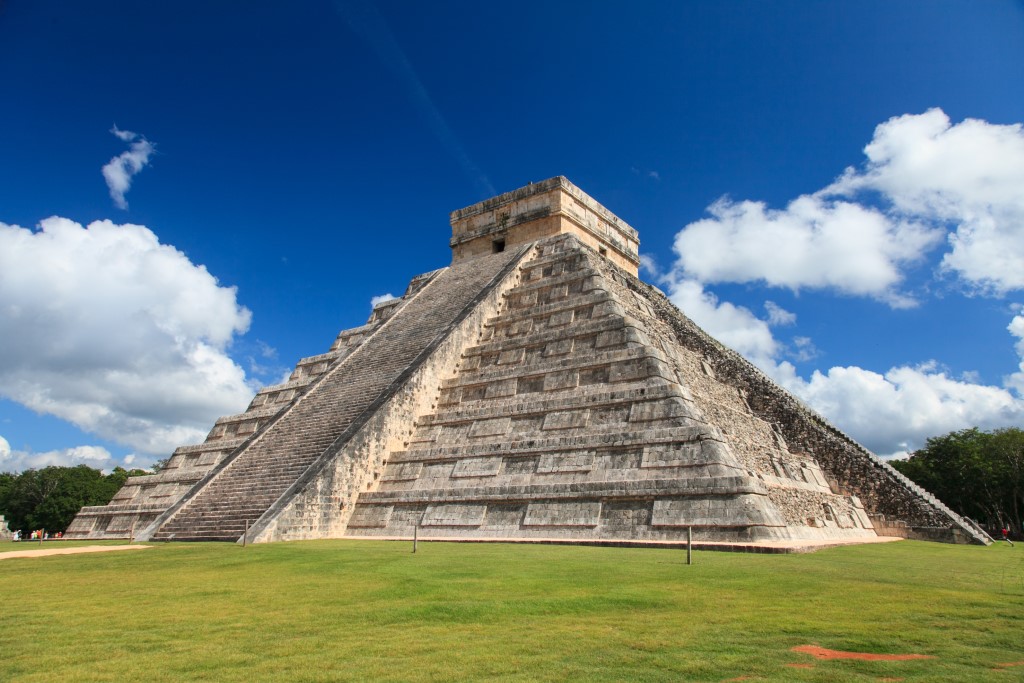 12. Attend the Day of the Dead Festival

The Day of the Dead festival is an annual celebration in the fall in Mexico in October. The biggest celebration is held in Mexico City, and it’s worth visiting during the festival if you can.

The city hosts an abundance of events the weekend of the festival. Just make sure you book accommodations well in advance as this a popular Halloween bucket list destination. 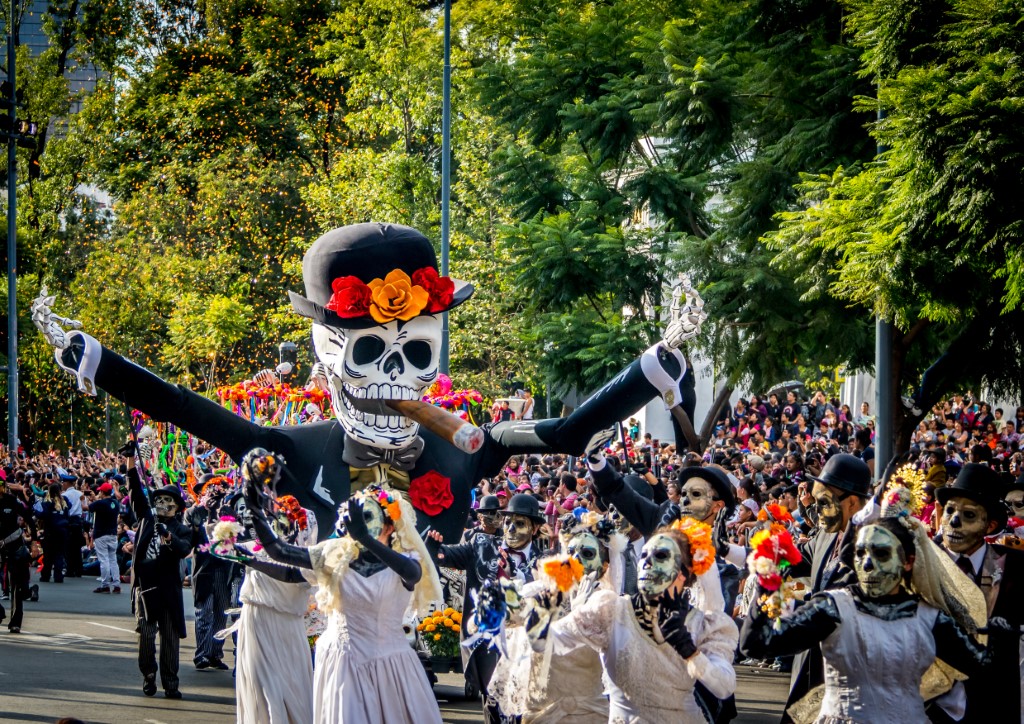 13. Walk around the National Palace

The National Palace is the central government building in Mexico City. It’s truly an architectural marvel and is built in the Baroque style. It will take your breath away! The building was built in the sixteenth century, and it’s where the current President of Mexico lives.

Tacos are served at many places throughout Mexico, but instead of going the traditional route, try to find some fish tacos to eat somewhere. Authentic Baja tacos can be found throughout the country. Just find a place that seems more local versus big-name.

One simply doesn’t visit nd not drink tequila. You could go for a tasting, get it in a mixed drink or just go straight for shots. 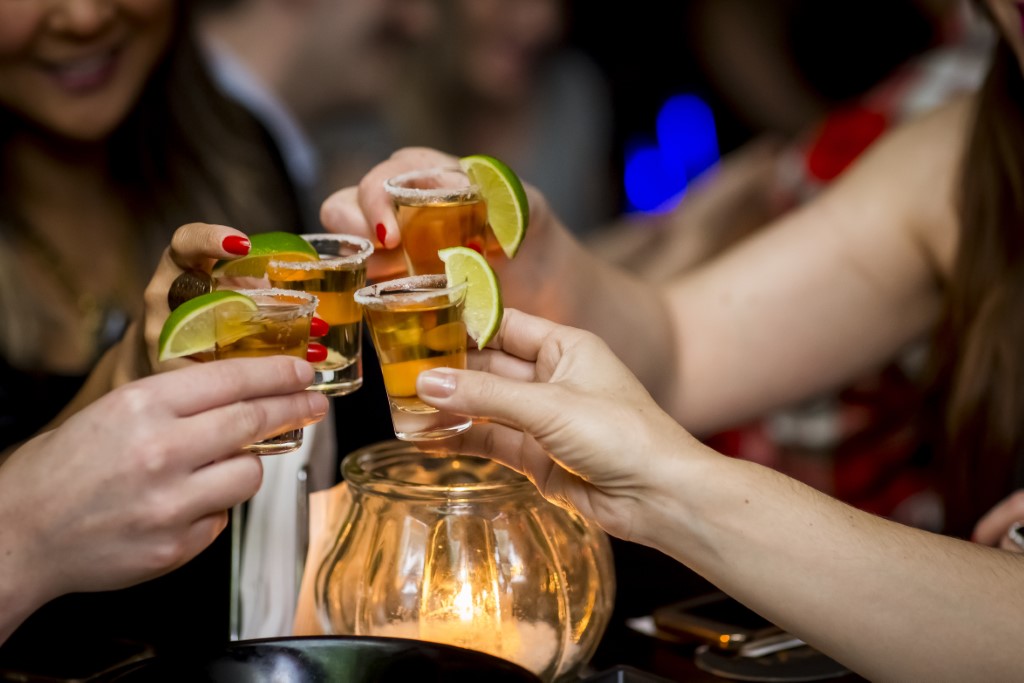 16. Discover the Pyramid of the Sun

The Pyramid of the Sun is another historical architectural landmark in Mexico. This one is one of the biggest of its time and was built in 200 A.D. It’s located in Teotihuacan and is incredibly tall. You’ll feel so tiny standing next to it!

17. Walk through Merida and explore the colorful streets

Merida is a great city to visit in Mexico. It’s known for its incredibly bright and vibrant homes, making it very picturesque. There are tons of great attractions in the city, including Paseo de Montejo, Dzibilchaltun, and Catedral de Merida. Just visit without a plan, and you’ll be amazed by the beauty! 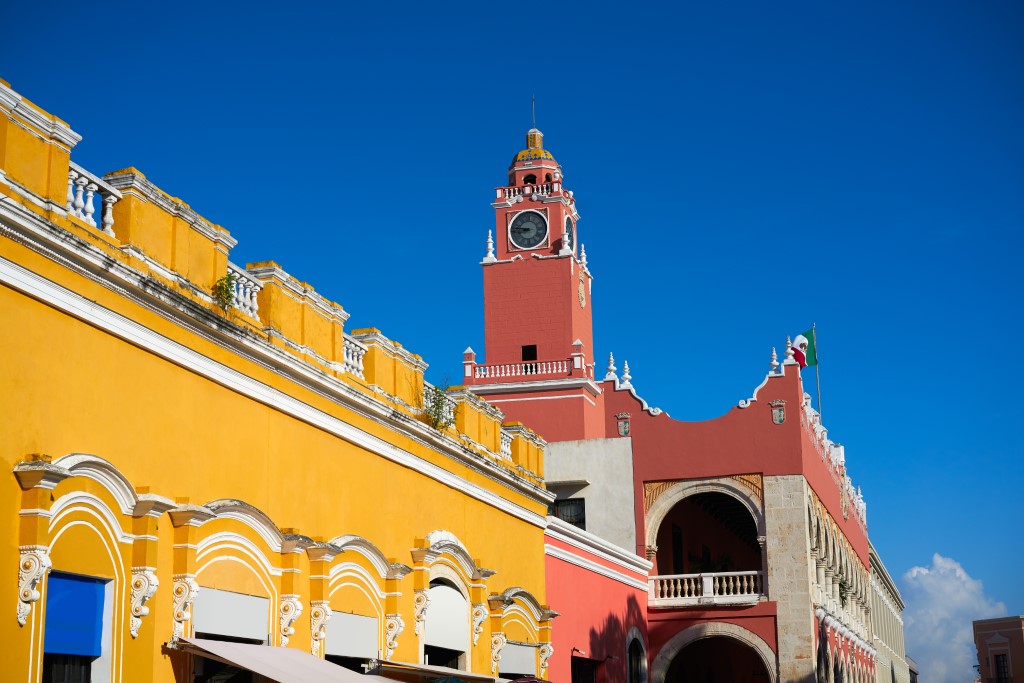 While you could attend a salsa dancing class where you’re from, it’s more authentic (and you can support a local’s business!) if you take a class while in Mexico. Just take one at any dance studio, as this is one of the more popular classes offered throughout the country.

Pink lakes are all over Instagram, and a lot of times, they’re fake. Well, that’s not the case when visiting Las Coloradas. There are pink-hued lakes here that you’ll want to visit. They’re considered somewhat of a hidden gem in Mexico. 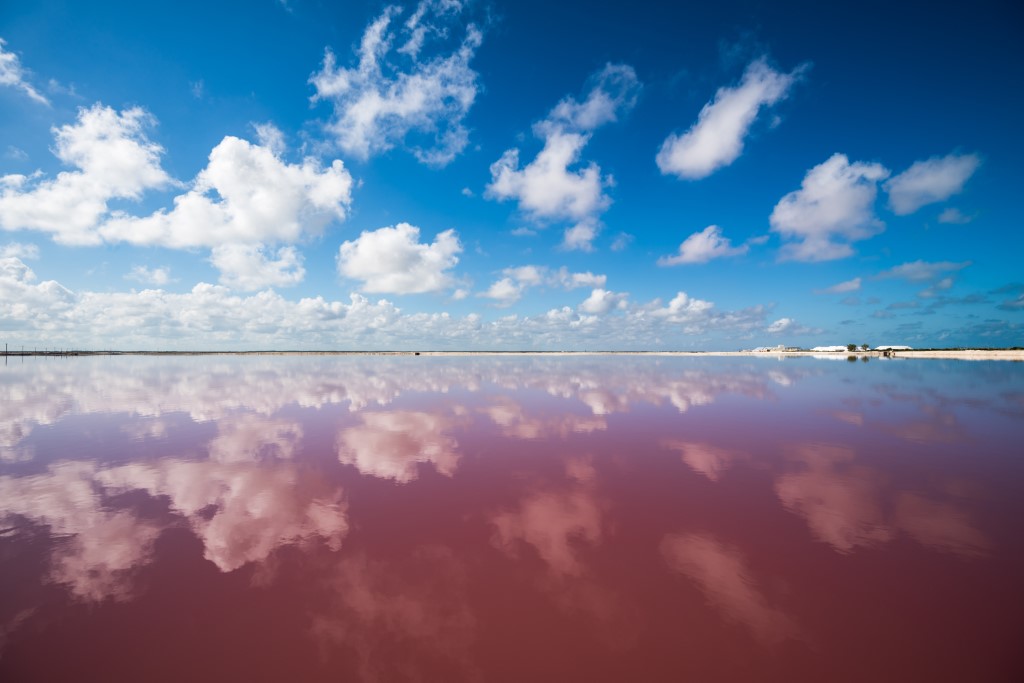 For all of your beachside dreams, head to Puerto Vallarta. It’s located right on the coast and is filled with some of the best beaches in the entire country. There are also tons of great shops, nightlife, and history to explore when visiting this area. If you go to Puerto Vallarta, make sure that you also visit the surrounding area.

If you’re visiting a place that has volcanoes, why not go see them? Head to Paricutin in Mexico, right outside of Mexico City. This volcano is unique and breathtaking, even if you only see it from a distance. It’s considered a tourist attraction, but since it’s a volcano, keep in mind that it could always be potentially dangerous.

23. Eat your weight in tacos

Doesn’t even matter what kind – just enjoy them all!! 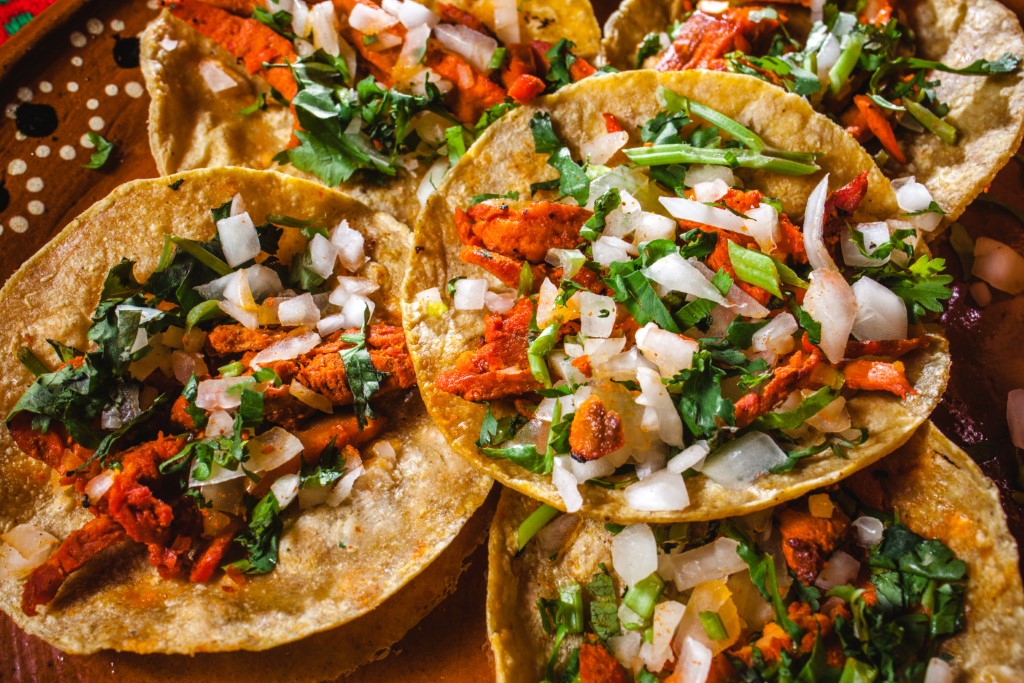 This is the top-rated cultural center in Mexico. It’s home to tons of events held in Mexico City, including theatrical performances like opera and theater. In addition, it’s home to other arts, like photography exhibits, sculptures, and occasionally paintings. The building itself is also beautiful!

One of the top resorts in Mexico is Xcaret Park. It’s located right along the coast, so the views are incredible, and the water is a breathtaking turquoise blue. It also doubles as a theme park of nature. Book a stay at the Hotel Xcaret to spend some time here. 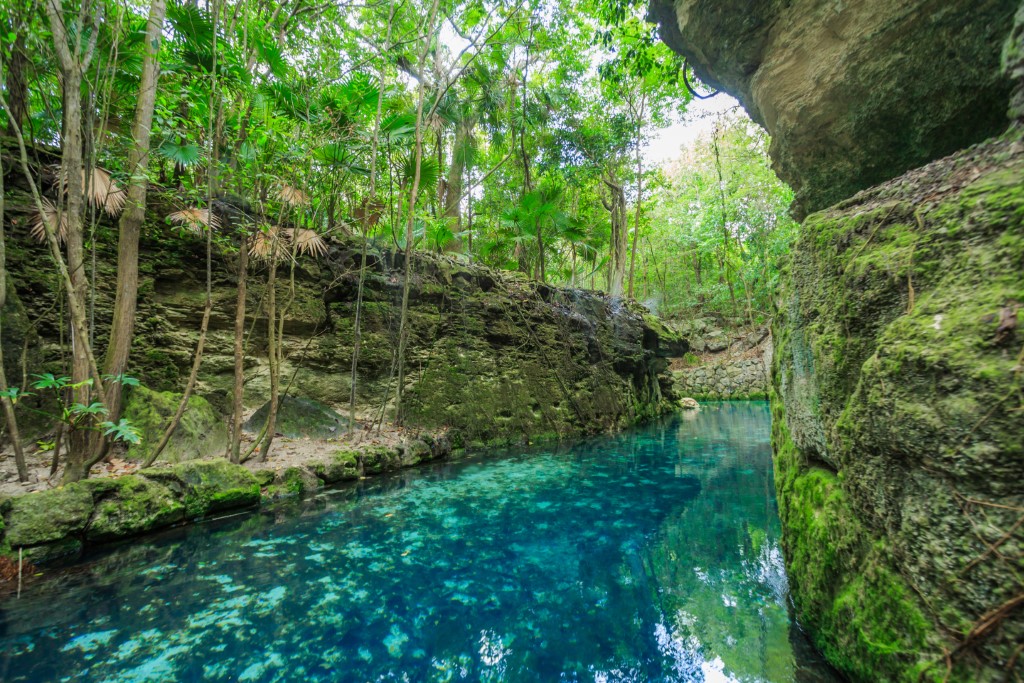 26. Learn how to scuba dive

Did you know that you can get your scuba diving certification while visiting Mexico? It’s true! There are quite a few companies throughout the country that offer lessons for people as young as ten years old. Whether you’ve been scuba diving before or not, this is the perfect place to get your certification. 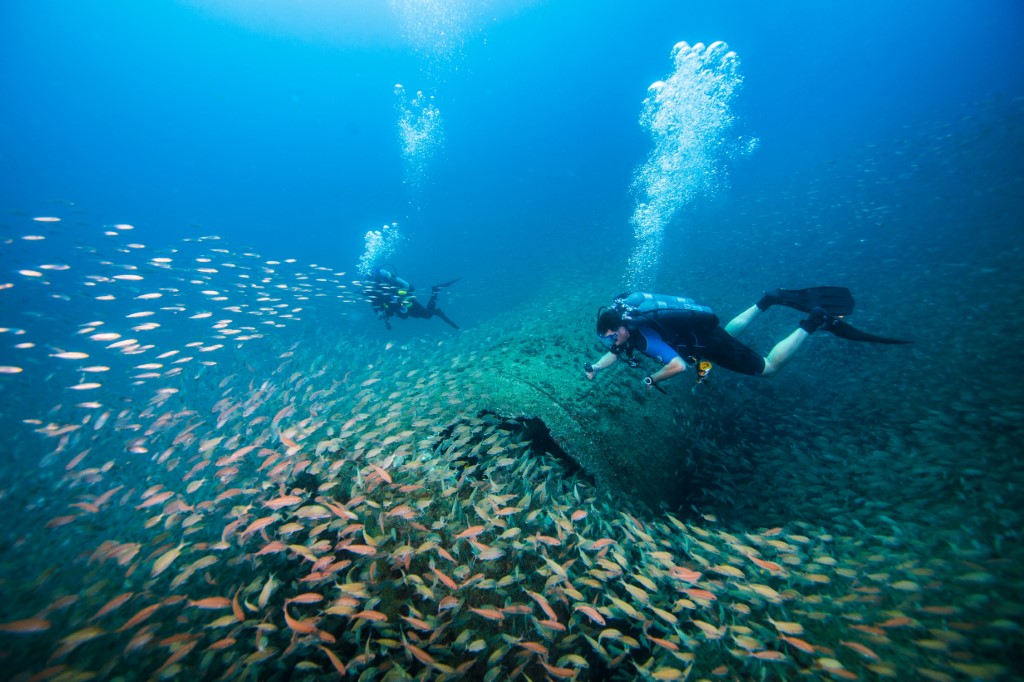 This is one of the most fun attractions on this Mexico bucket list! There are a group of divers who put on fun performances for visitors in the area, with some of the ledges they jump off being more than fifty feet high. They are often referred to as the divers of La Quebrada!

28. Indulge yourself at Pujol

This restaurant is named as one of the best restaurants in all of Mexico. It’s a more luxurious place to eat, with high-end pricing for all meals, but the food is incredible. It’s run by a chef named Enrique Olvera.

The Arch of Cabo San Lucas is a natural landmark right off the coast. This rock formation forms an arch right over the water and is often referred to as Land’s End. It’s easily the most picturesque landmark on this Mexico bucket list when it comes to natural attractions. 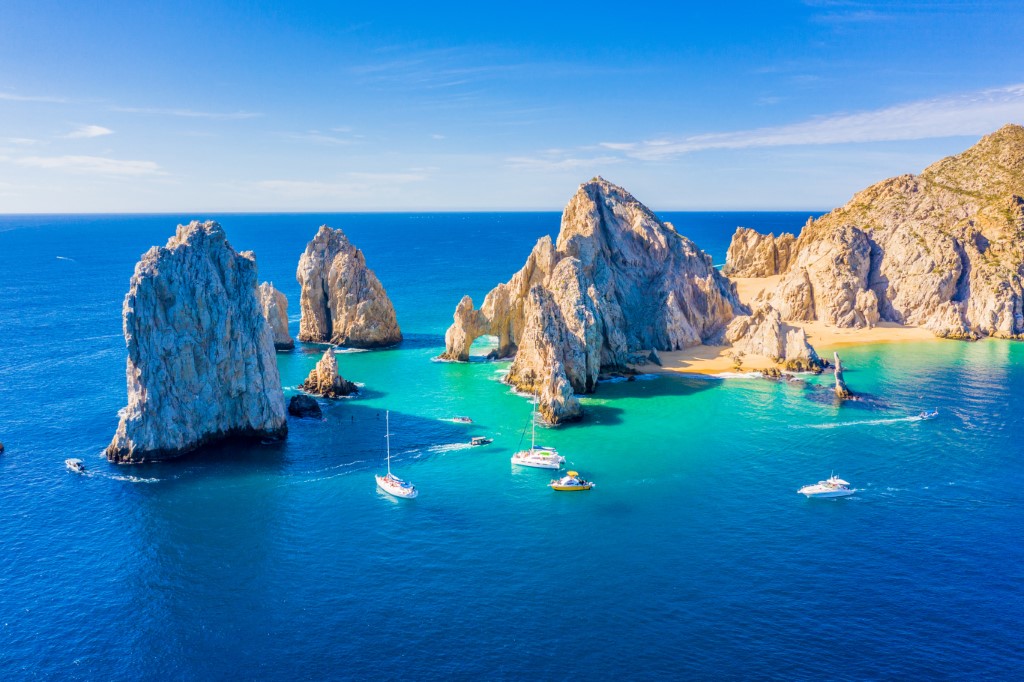 Rio Secreto is a unique underground river! The best way to visit it is with a tour which will bring you through all of the best parts of the river. You’ll truly be mesmerized by the stalagmites and crystal clear blue water. Make sure you book tickets in advance.

Isla Contoy is an island turned national park that is most well known for its wildlife. There is no better place in Mexico to go birdwatching than Isla Contoy. Keep in mind that the only way to get there is via boat! You could also consider taking a tour.

32. Terrify yourself at the Island of Dolls

This is one of the creepiest attractions on this Mexico bucket list. It’s essentially an island filled with dolls that are hanging from trees. There’s a local legend as to why the dolls are there, but it’s worth doing the research yourself so you can know the story. 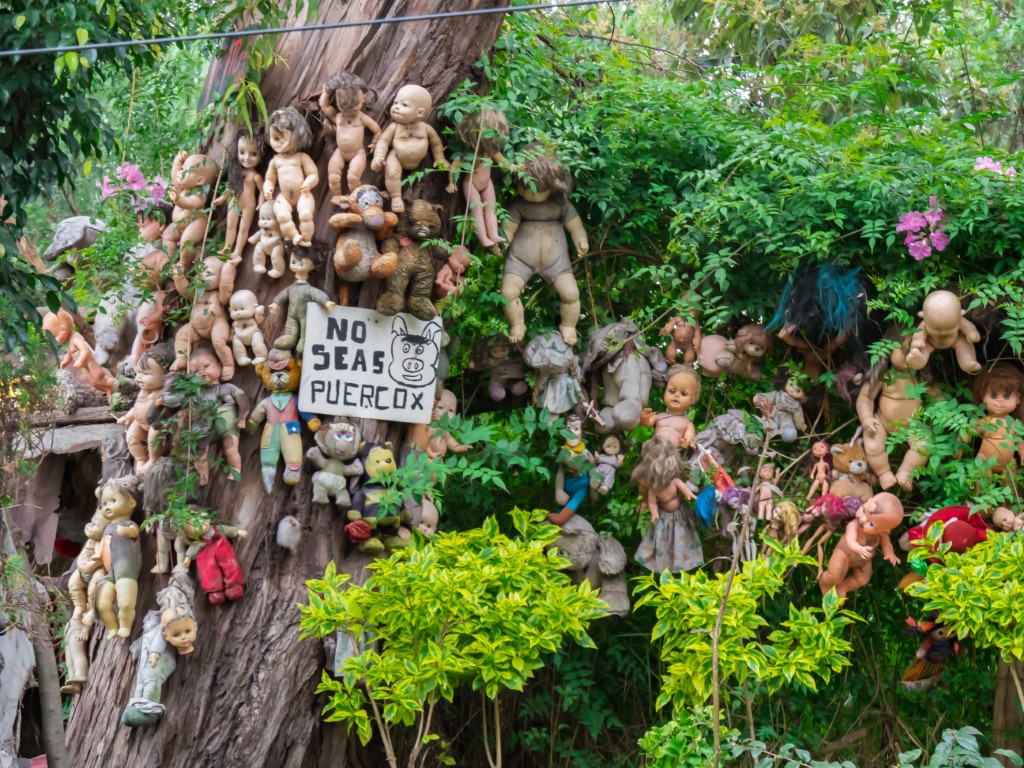 Because most of Mexico is surrounded by water, going on a boat tour is a great way to explore the area. Most of the coastal resorts and port towns, and cities have boat tour companies that will bring you around at a relatively affordable price. Some of them even include lunch or dinner!

34. Marvel at the beauty of Izamal

Izamal is an underrated small town in Mexico that is worth visiting if you have the time. It’s most well known for its yellow buildings, and you’ll have a more authentic small-town Mexico visit by traveling to here during your trip to the country.

For a relaxing afternoon in the sun, go to Playa Norte! This beach is incredible with its white sand and crystal blue water. There are places to lay out, restaurants surround the area, and the tropicalness of it will make you feel like you’re truly in paradise. 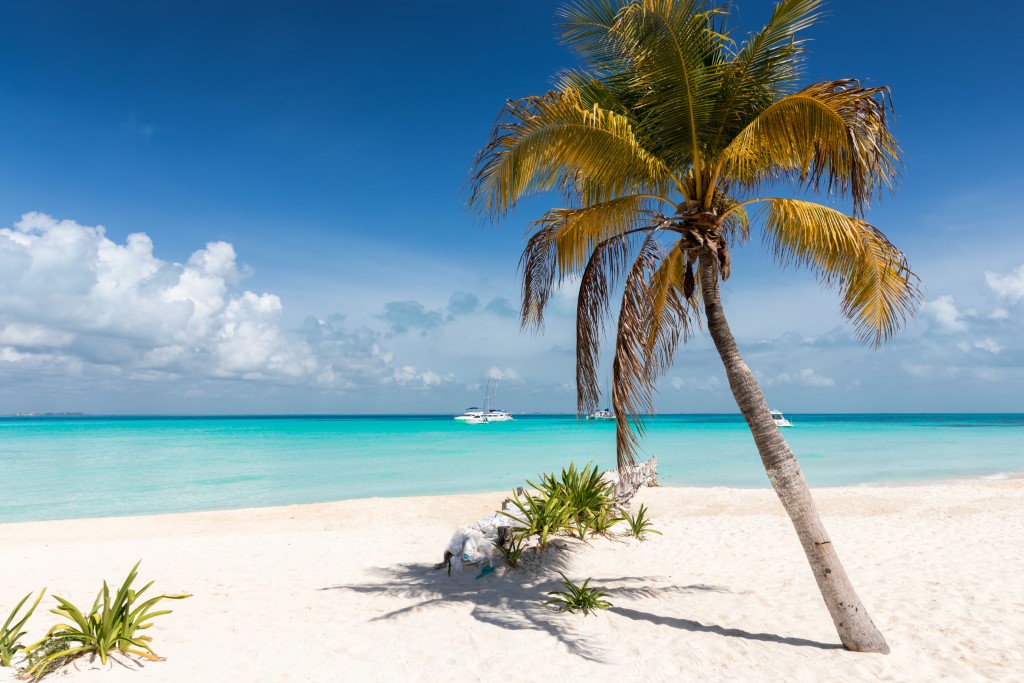 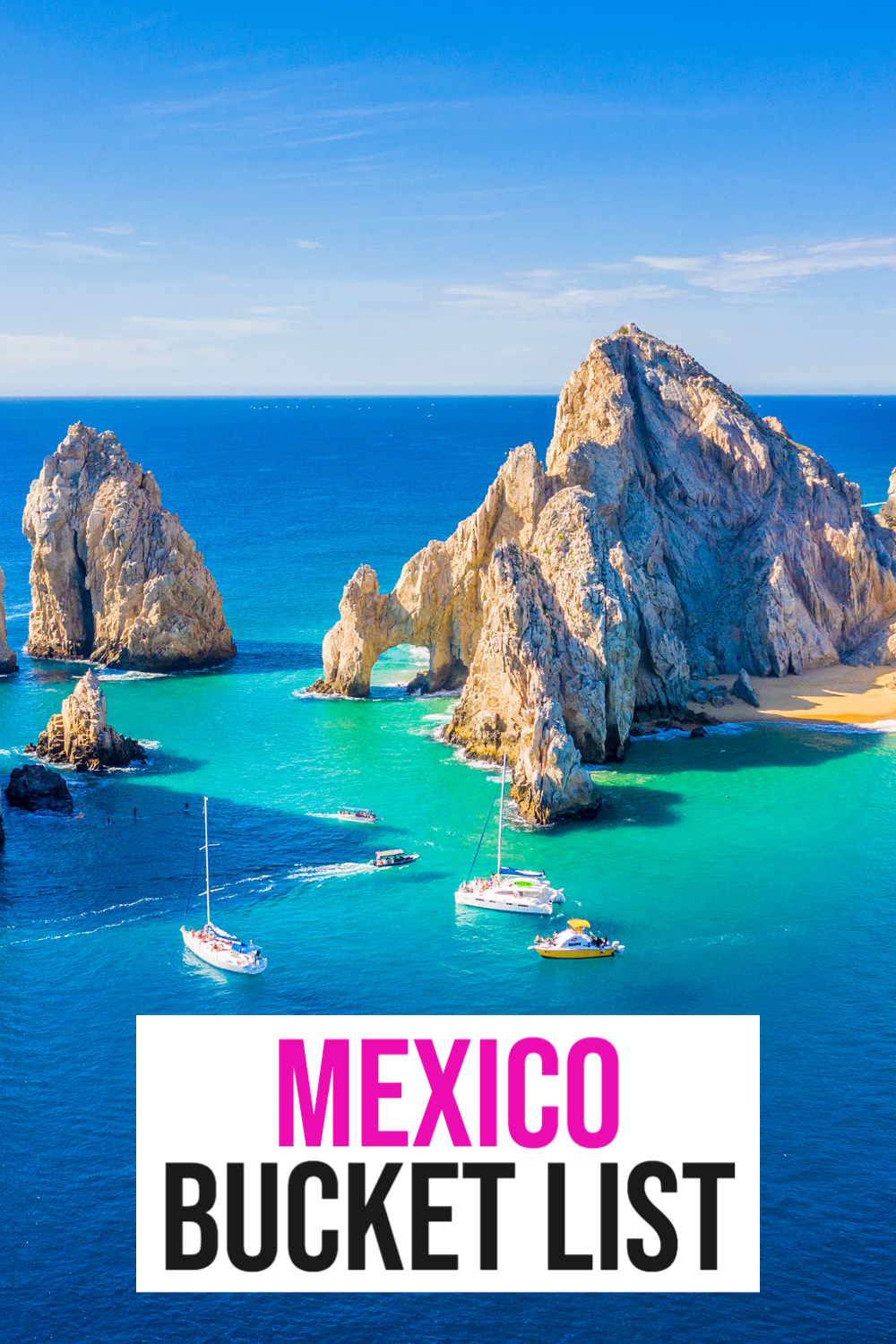