Looking for things to add to your Los Angeles bucket list? This comprehensive list will keep you busy during your stay. While Los Angeles is just one city, you must add it to the much bigger California bucket list.

Los Angeles is considered a top USA bucket list destination and one of the most visited bucket list cities in the world.

Have fun checking things off your LA bucket list and don’t forget to take pictures. 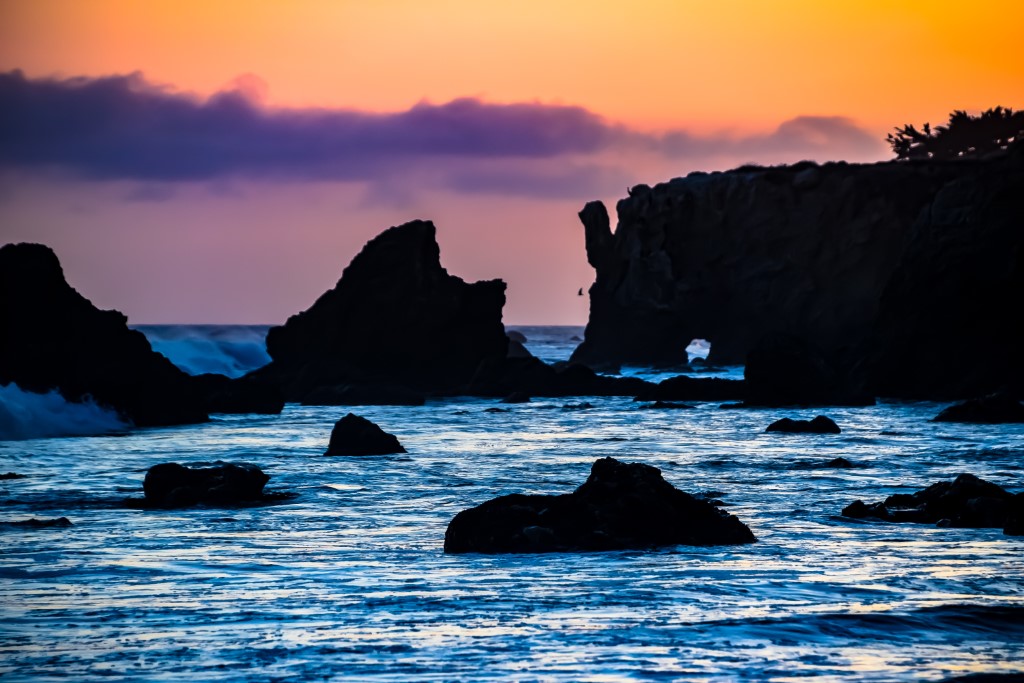 1. Walk around the botanical gardens at The Huntington Library

The Huntington Library opened in 1919 and is home to one of California’s most breathtaking botanical gardens. You’ll feel like you’re in another world while walking through them! After the gardens, be sure to visit the art museum too if you’re an art lover.

Rodeo Drive is easily a destination that should be at the top of your Los Angeles bucket list. It’s a street in Beverly Hills that is home to luxury shops. Even if you can’t afford anything, it’s super fun to spend an afternoon walking around and window shopping because of how beautiful the stores are. You might even spot a celebrity! 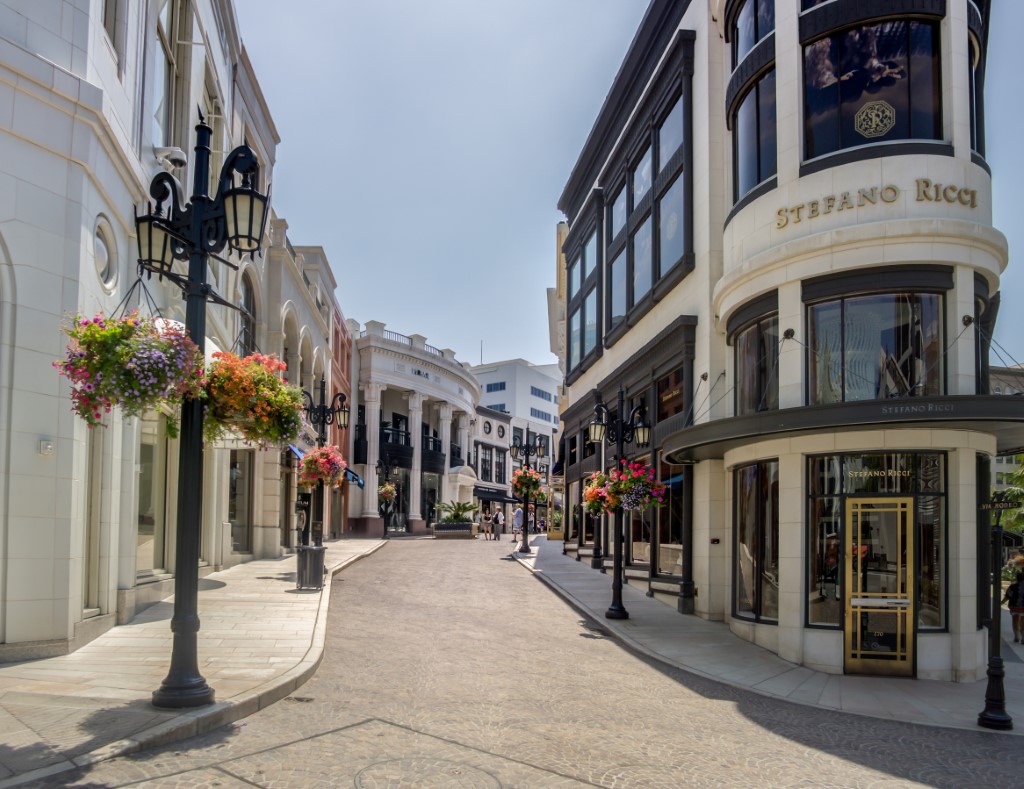 Pink’s is a restaurant that’s known for its epic hot dog flavors. The building itself is hot pink and looks like a retro spot to eat, which only adds to its allure. Some famous hot dogs to order include the Giant 12” Jalapeno, Giada de Laurentiis, and the Lord of the Rings Dog. Your LA bucket list would not be complete without a stop here!

The LA Food & Wine Festival happens annually, generally in the month of August. It showcases all of the best food and wine that you can find in Los Angeles county. Just make sure you attend when you’re hungry because you’ll leave stuffed! In addition to food, there’s also some live music for guests to enjoy.

When visiting Los Angeles, you can’t help but see the Hollywood Sign from the city. This historic landmark is best viewed by a hike up to it. Luckily, there are a few different trail options. If you want an easy trail, take the Mt. Hollywood Trail. For a more challenging hike, take The Cahuenga Peak Hike. 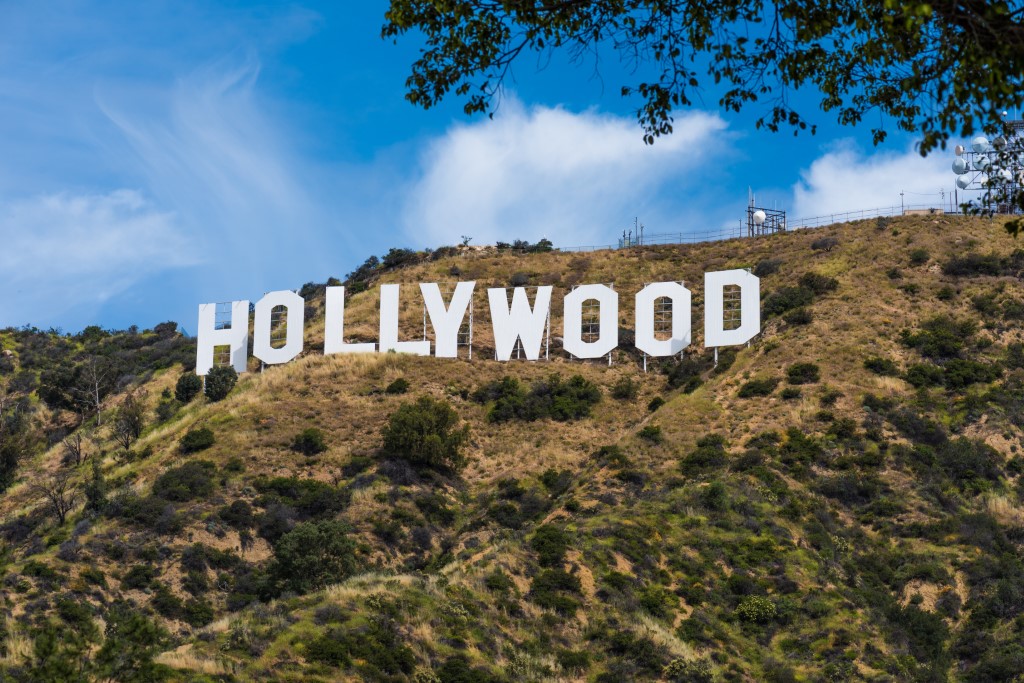 The Chinese Theatre is located right on Hollywood Boulevard and is famously visited because of what’s in front of it. Visitors to the city of Los Angeles can see handprints from their favorite celebrities, including the leading trio from the Harry Potter movies! Make sure to add this attraction to your Los Angeles bucket list. It’s conveniently located near the Walk of Fame.

Grand Central Market is a massive food court in Los Angeles that opened in 1917. Even the pickiest of eaters can find something to satisfy their tastebuds here. Plus, there’s tons of seating so you can sit down after picking your meal. It’s the perfect stop while spending some time in Los Angeles.

The Venice Canals will genuinely make you feel like you’re in Italy, despite being surrounded by palm trees. They span 12 acres and were built in 1905. Be sure to spend time exploring the rest of Venice because it’s one of the city’s more historic areas with lots of fun hidden gems. For a great view, try to visit the Venice Canals at sunset. 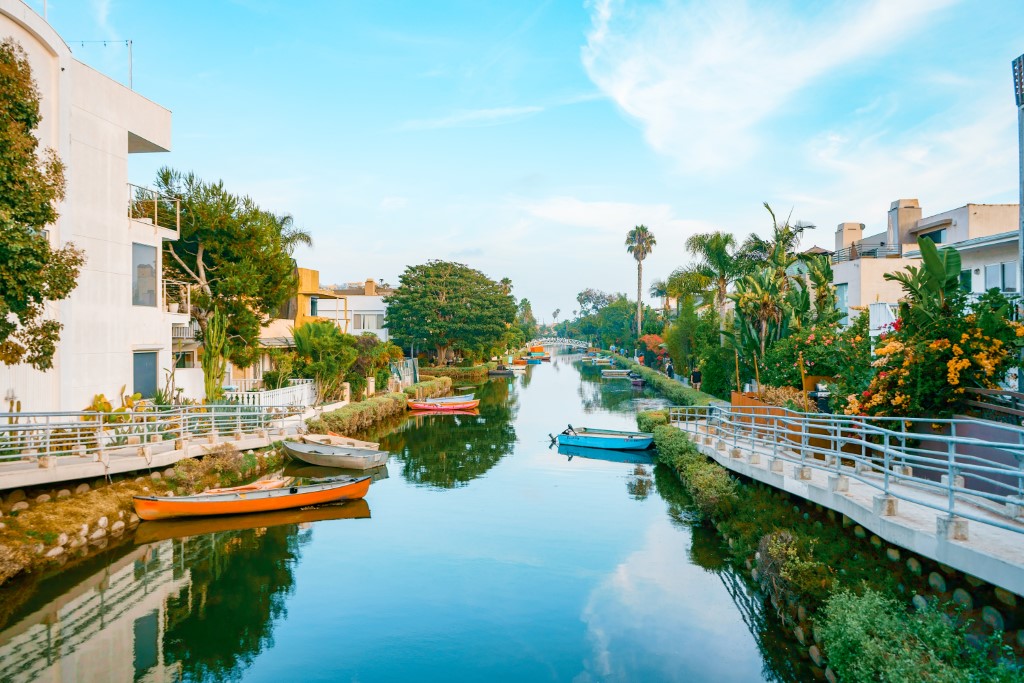 9. Learn at the Museum of Jurassic Technology

Next on this Los Angeles bucket list is the Museum of Jurassic Technology. This museum has fairly-priced tickets and opened in the late twentieth century. The museum is dedicated to the Lower Jurassic and works to educate visitors. It’s a pretty interesting museum if you love learning while traveling.

At least one beach had to be included on this Los Angeles bucket list. Many locals argue that El Matador State Beach is the best one in the area, so be sure to stop by and relax here. Immense rock structures surround it, and the water is a breathtaking turquoise blue. What more could you ask for out of a beach in Los Angeles?

This is one of the most beautiful bucket list beaches, so don’t miss it! 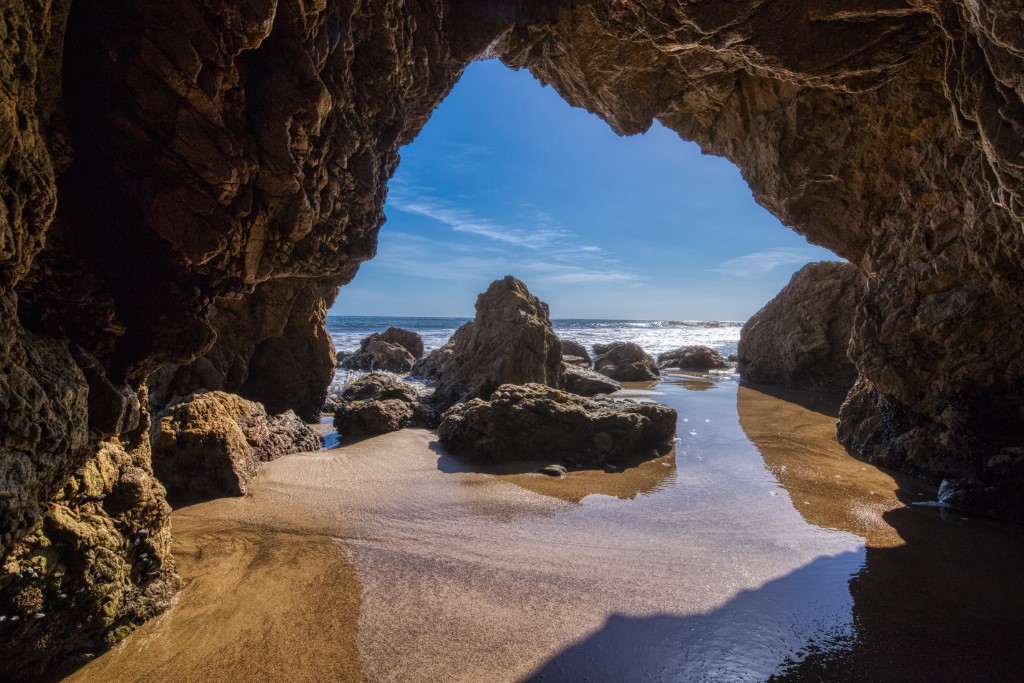 Runyon Canyon offers some of the best hikes in all of Los Angeles. Plus, dogs are welcome to the park. There are a few different trails here, but if you’re looking for an easy one, check out the 2-mile loop hike. The views are great no matter which hike you choose. Make sure to plan wisely for the heat, and be sure to stay hydrated during your hike! 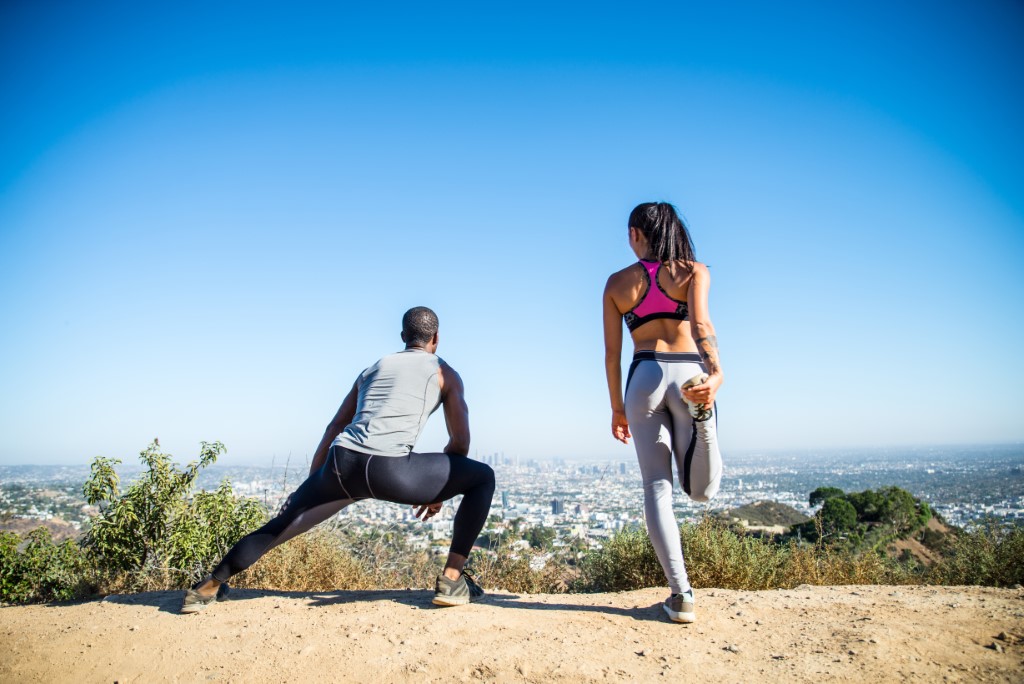 You’ve probably seen or at least heard of Sprinkles cupcakes on Instagram, and it’s for a good reason. You can get these cupcakes out of vending machines throughout Los Angeles, and they’re open 24/7. All you have to do is scan your card, choose your cupcake, and it pops right out.

The Los Angeles Dodgers are the MLB team of the city. One of the best ways to experience and learn more about Los Angeles is to experience the sports culture. If you’re visiting during the season, be sure to see a game at Dodger Stadium for a really fun time!

14. See the view from the Griffith Observatory

The Griffith Observatory was built in the early twentieth century and offers Downtown Los Angeles’s best views. It’s one of the most popular spots to catch the sunset in the city, and it’s entirely free to visit. 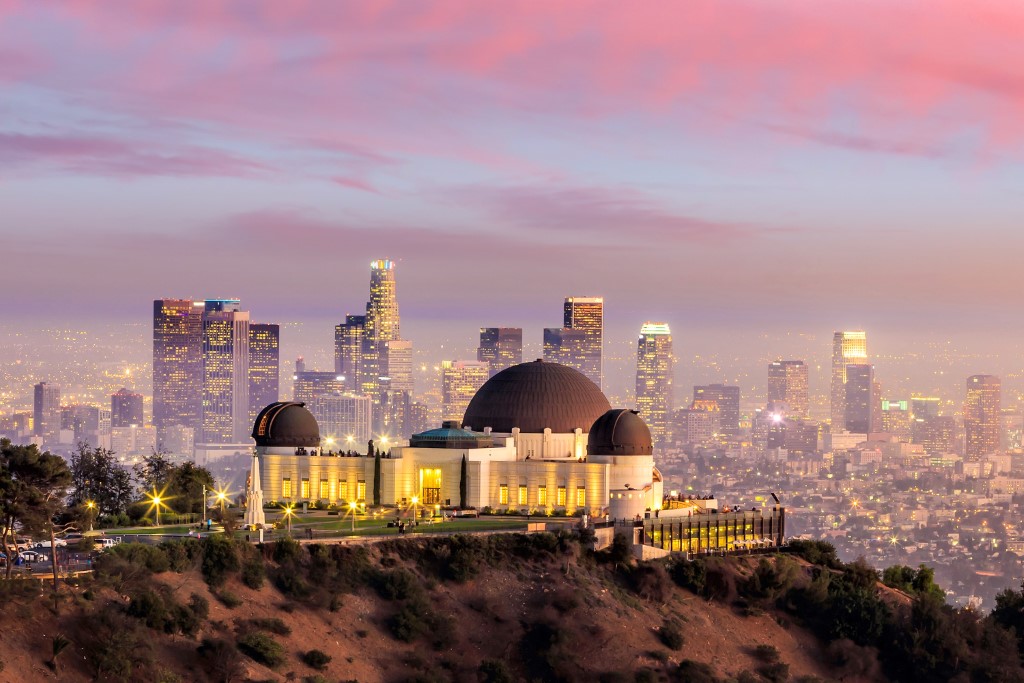 Venice is one of the most popular neighborhoods to visit in Los Angeles, and for a good reason. It has a trendy and hipster vibe. Venice Beach, in particular, is beautiful, and there are tons of great boutiques and restaurants in the area that you won’t want to miss out on.

16. Be part of a live studio audience for your favorite show

Find out if one of your favorite shows are filmed right in Los Angeles! There are tons of shows that are filmed here, including The Ellen Degeneres Show and Jimmy Kimmel Live! among others. If you have the time, try to attend one for an unforgettable experience on this Los Angeles bucket list.

Los Angeles is known for its amazing tacos, and there’s no better place to try it than from Leo’s Tacos food truck. They usually send out about eight food trucks a day, and food on the menu starts as low as $1.25, so you won’t break the bank.

Walt Disney Concert Hall is absolutely breathtaking and was officially opened to the public in 2003. Be sure to check out the Blue Ribbon Garden if you visit, a beautiful place to walk around and explore that’s usually pretty tranquil.

If you’re up for a challenge, be sure to walk the Culver City Stairs up to the Baldwin Hills Scenic Overlook. It’s outside and offers excellent views all around. Plus, it’s a pretty good workout. There are only 282 stairs in total, so you should only have to spend an hour here, no longer.

Many different film studios are located in Los Angeles, and one of the most popular ones to tour is Warner Brothers Studios. There are a few different options, including deluxe and classics tours. The tour lasts around three hours, and you’ll get a great inside look into what it’s like on a studio lot!

21. Stroll along the Hollywood Walk of Fame

The Hollywood Walk of Fame is easily one of the best attractions on this Los Angeles bucket list. It spans 15 blocks on Hollywood Boulevard and is filled with stars that are right on the sidewalk. Each star is dedicated to a different important person in Hollywood, so you may even find your favorite celebrity’s star. 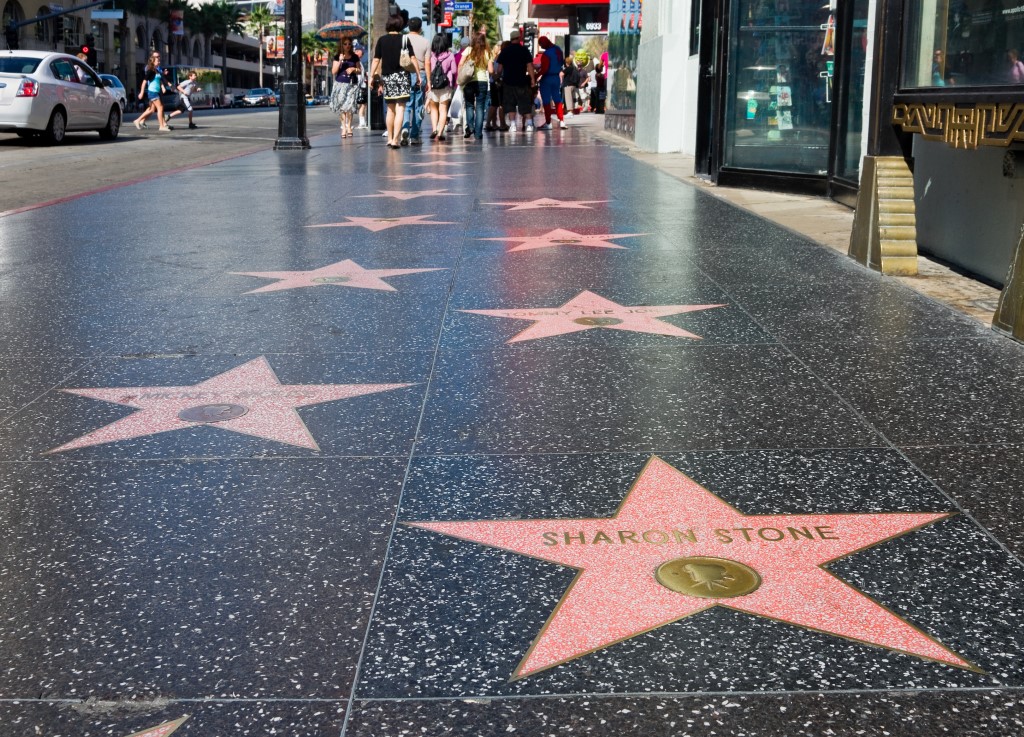 22. Live out your dreams at Universal Studios Hollywood

If you’re a fan of films and you love theme parks, head to Universal Studios Hollywood. Keep in mind that this is more of a day-long task, especially if you plan on riding the different attractions in the park.

Getty Villa is a museum located in Los Angeles that opened in 1974. It’s breathtaking and has Roman architecture, which makes it incredibly unique. Plus, the gardens are unlike any other that you can see in all of California. 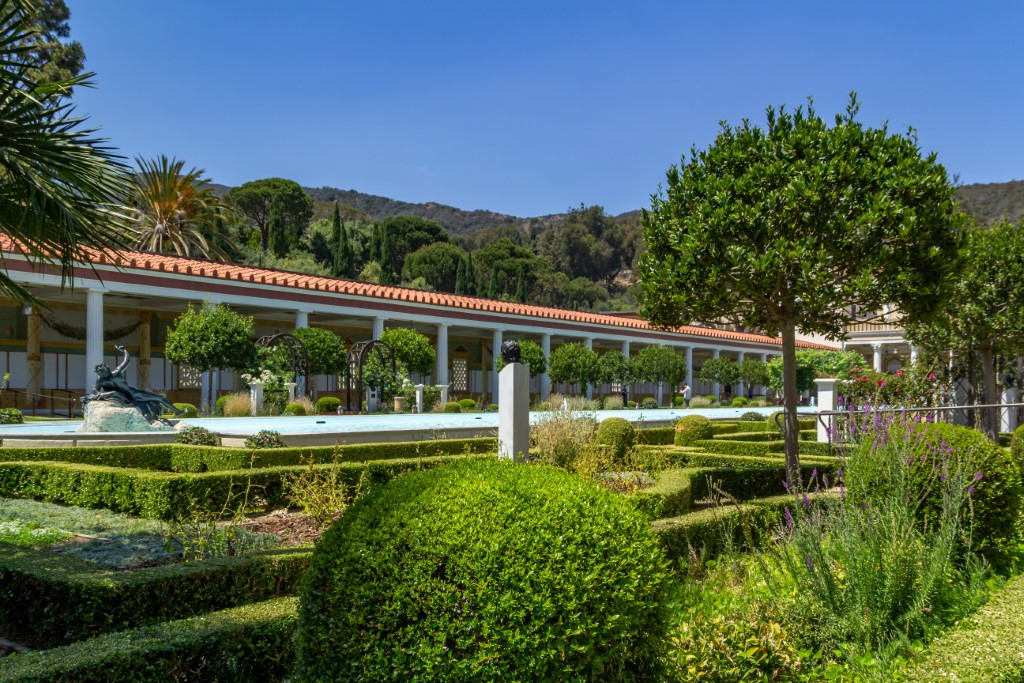 24. Find your new favorite book at The Last Bookstore

While The Last Bookstore has recently gained popularity due to the Netflix show about the Cecil Hotel, it’s been a staple among locals for a long time. This bookstore is vast and offers both new and used items, so you can find a new book without breaking the bank. They also sell lots of records! 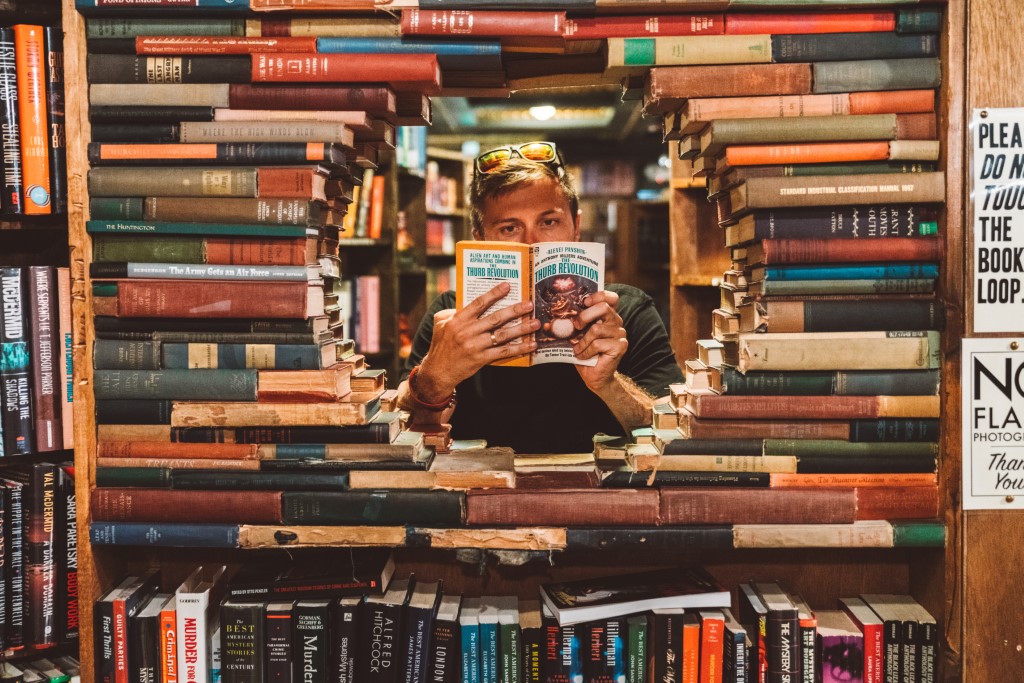 The Hollywood Forever Cemetery hosts events throughout the year, including movie showings during the summer. If you’re looking for a fun thing to do during a summer night, make your way here for an unforgettable experience.

26. Have fun at Santa Monica Pier

Santa Monica Pier offers fantastic views and is even filled with a fun amusement park. There’s a Ferris wheel, a roller coaster, and even different shops for you to grab souvenirs or a bite to eat. 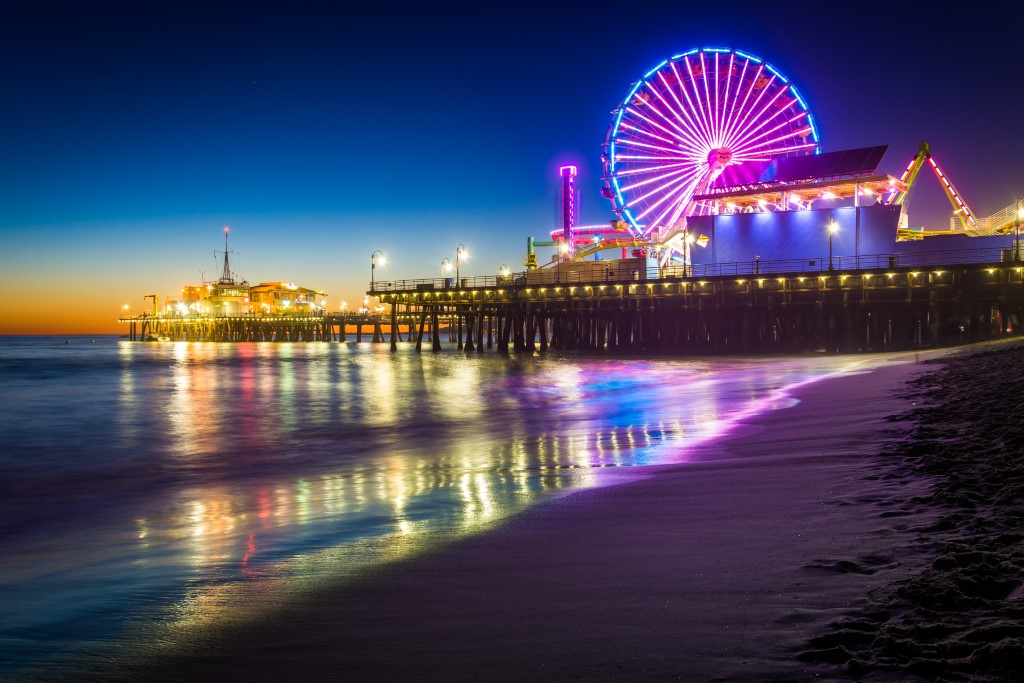 27. See a show at the Hollywood Bowl

The Hollywood Bowl is the top live music venue in Los Angeles. Plus, it’s outdoors and offers excellent views of the nearby mountain range. Be sure to check out the schedule to see if you can catch a band during your trip!

28. Take photos at the Los Angeles County Museum of Art

If you’re looking for a spot to take amazing photos in Los Angeles, head to the Los Angeles County Museum of Art. It’s home to the fantastic street light art installation that you’ve most likely seen on Instagram before, and the museum holds excellent art too.

Knott’s Berry Farm is consistently ranked as one of the top theme parks in the United States every year. It’s located right outside of Los Angeles in Buena Park. Be sure to check out the restaurant to see what the berry hype is about. 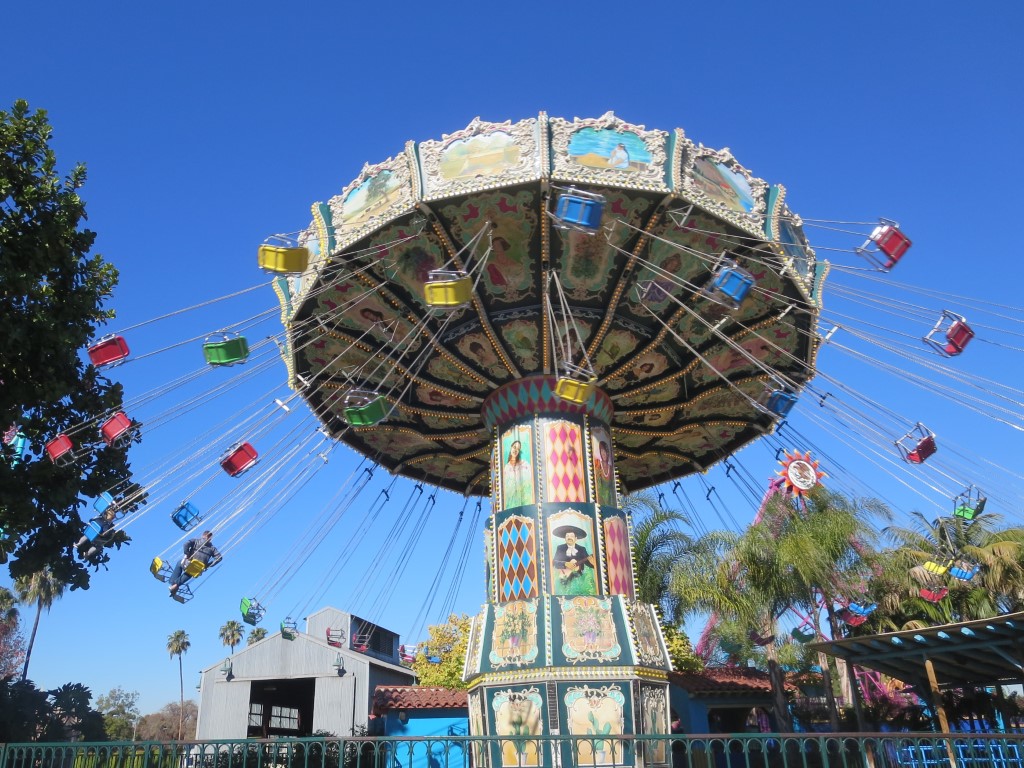 Mulholland Drive is said to have some of the best views in all of Los Angeles. Rent a car and drive along the road to find a spot to pull off at. Try to do this in the evening because the views are epic of the sunset over Los Angeles. 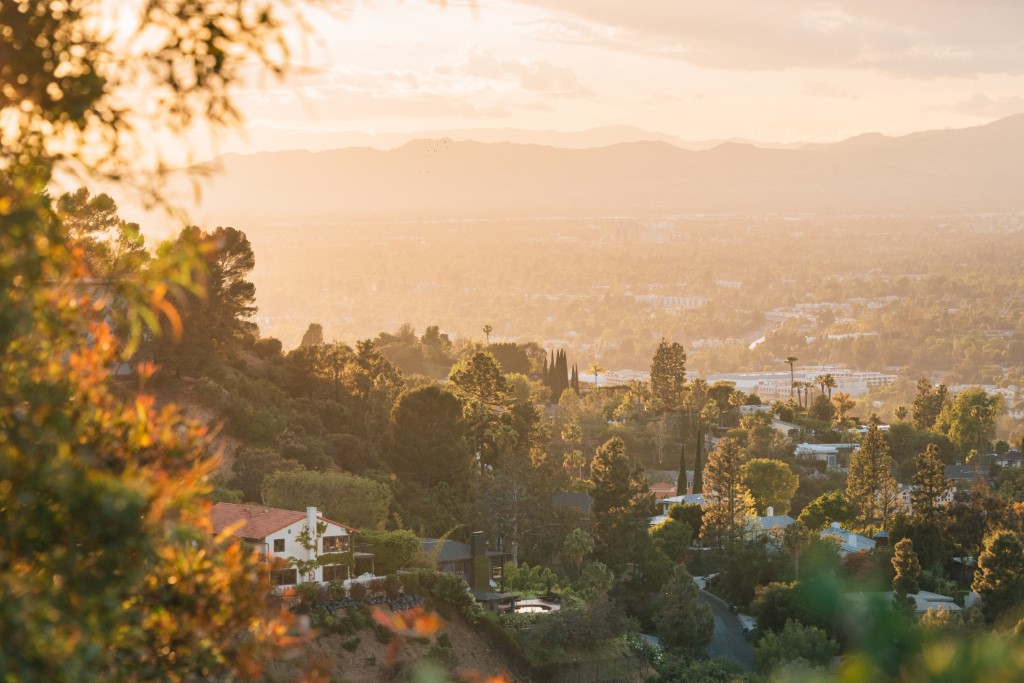 Little Tokyo is a historic district in Los Angeles that spans four acres. There are tons of great restaurants and shops here, especially if you want some authentic Japanese food. The district also often hosts some festivals!

Beverly Hills is one of the most luxurious neighborhoods in the whole country. If you have a car while visiting Los Angeles, take the time to drive through the area and check out the breathtaking houses. They’re genuinely immaculate! 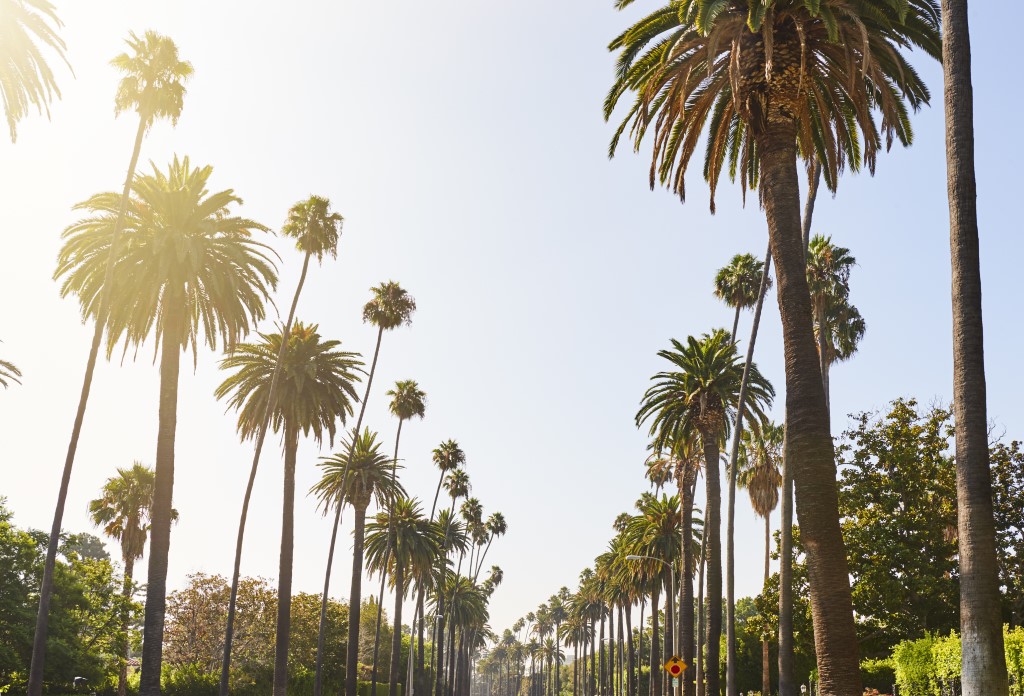 The Queen Mary is an old boat turned hotel that is breathtaking. You have to either book a stay, a tour or make a restaurant reservation to explore it. The interior is filled with an art deco ambiance that will take you back in time. 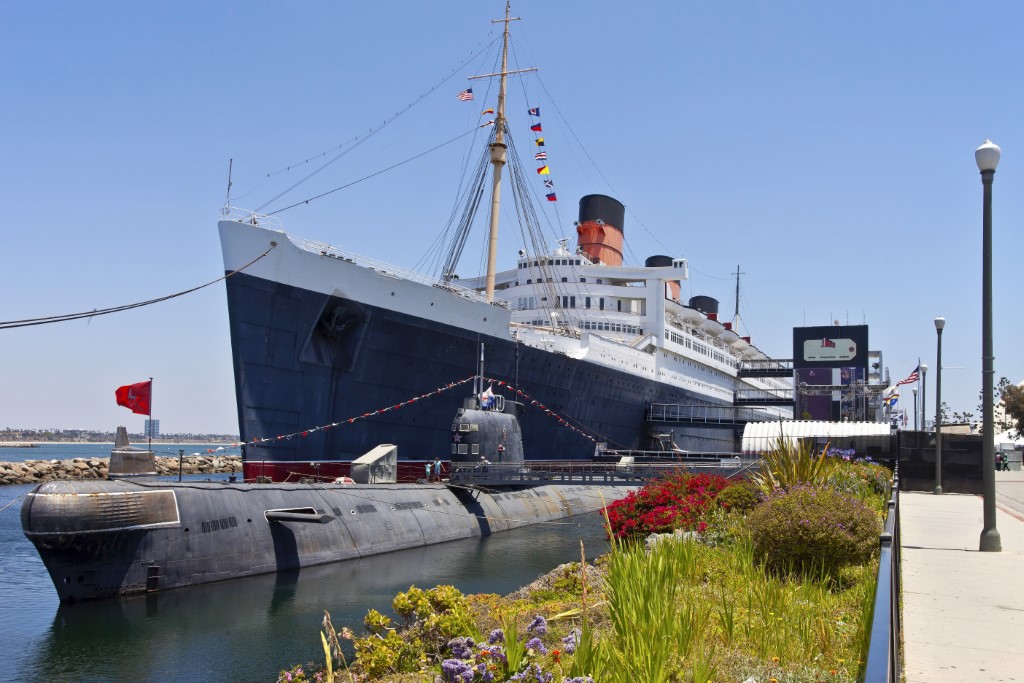 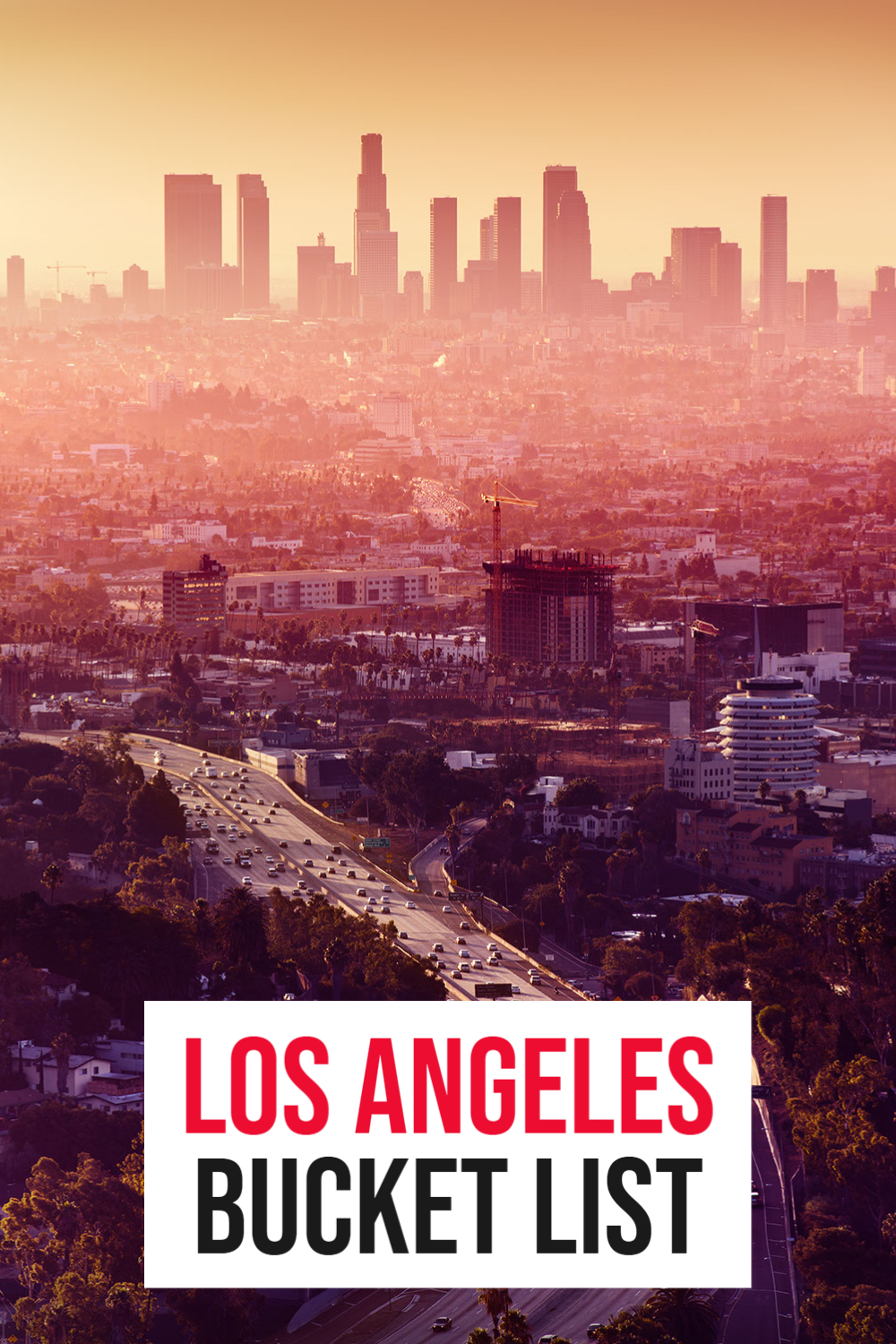