If you are looking for the best things to do in Greece, these epic Greece bucket list destinations are hands down the best.

This comprehensive list has the best offerings from the land and Greek Islands. One day you could be on shipwreck beach and the next, taking in a Santorini sunset. There is so much to see and do in Greece that it has long been a top European bucket list destination for many.

Santorini itself a top travel bucket list destination for many, and you will soon see why! 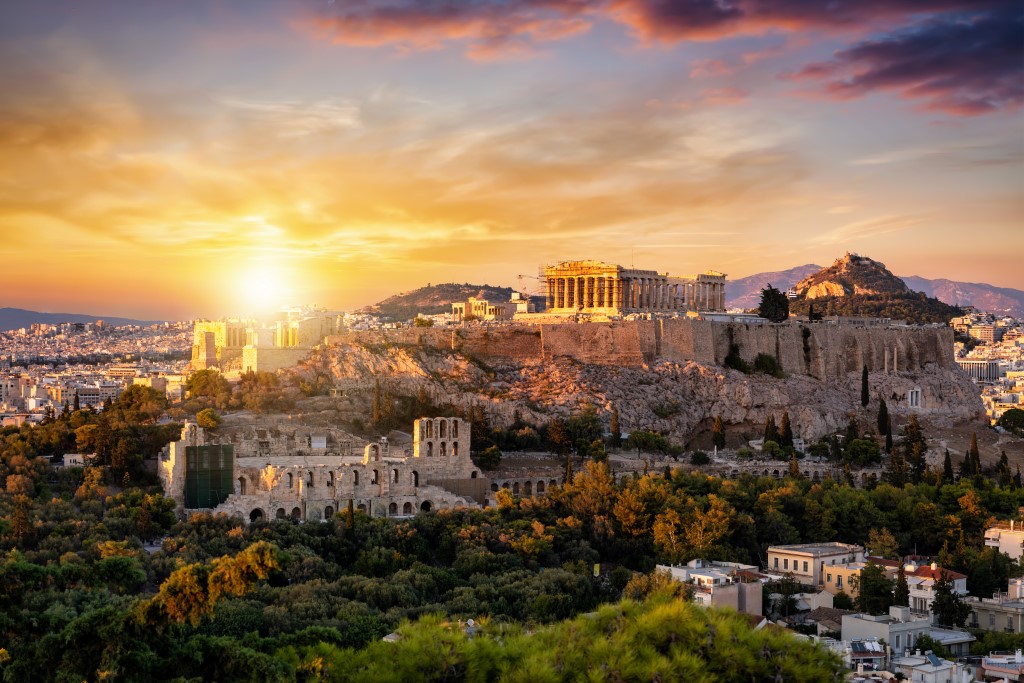 The Acropolis is one of the most famous places to visit in all of Greece and one of the best things to do in Greece while visiting. Located in Athens, it overlooks the city and is home to tons of historical buildings that are architecturally and culturally magnificent. Be sure to check out the Parthenon, the most popular site that’s located here. 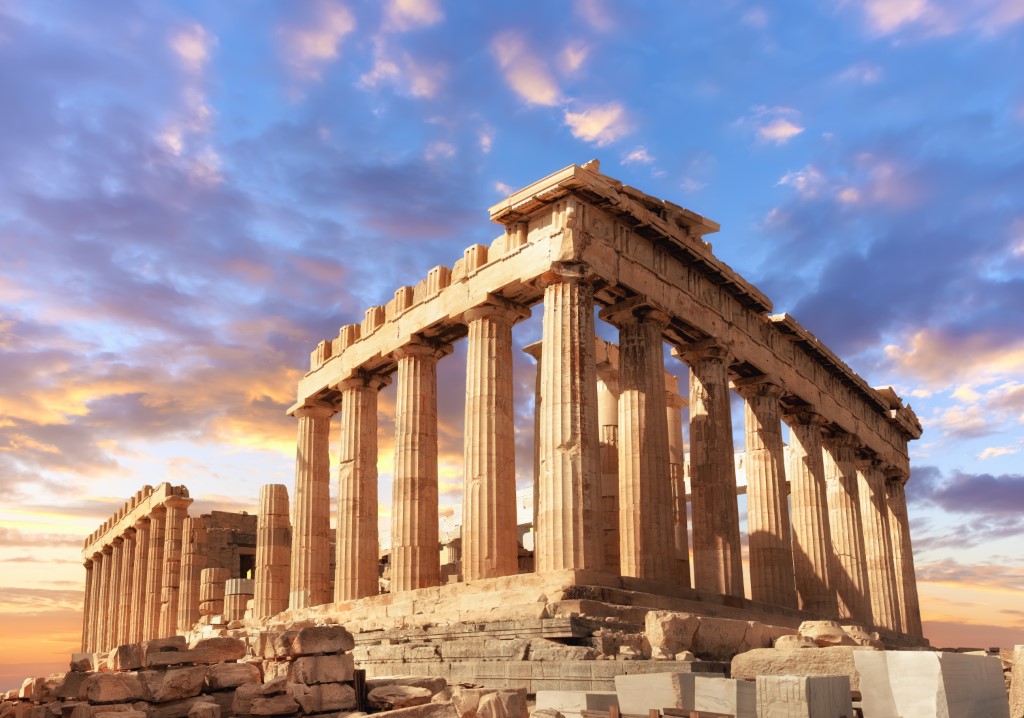 2. Learn at the White Tower of Thessaloniki

Located in Thessaloniki, this monument is one of the best places to learn the area’s history, which is why it’s on this Greece bucket list. The White Tower is pretty affordable to visit and was a fortress during the fifteenth century. It’s located right on the water, so the views are impeccable.

Delphi is one of the most historically essential spots in all of Greece. It’s from the 4th century BC and is most well known for being home to the Temple of Apollo. It’s located within the mountains and is right next to a beautiful historic stadium too.

4. Go on a wine tasting tour

Yes, the wine in Greece is fantastic. There are tons of places that you can try local wine in Greece, but some of the most popular wine regions include Thessaly or Naoussa. Go on a wine tasting tour to have a local guide introduce you to the best wines that Greece has to offer!

5. Take a trip to Zakynthos to see the old ship

Zakynthos is a breathtaking island in Greece that is truly a piece of paradise in the country. There are tons of beautiful beaches, great food, and even more culture. Be sure to check out the shipwreck, one of the most photographed places on the island.

The wreck occurred in the 1980s and has been there ever since. Ever since Instagram made this area popular, it has become one of the most sought after things to do in Greece. 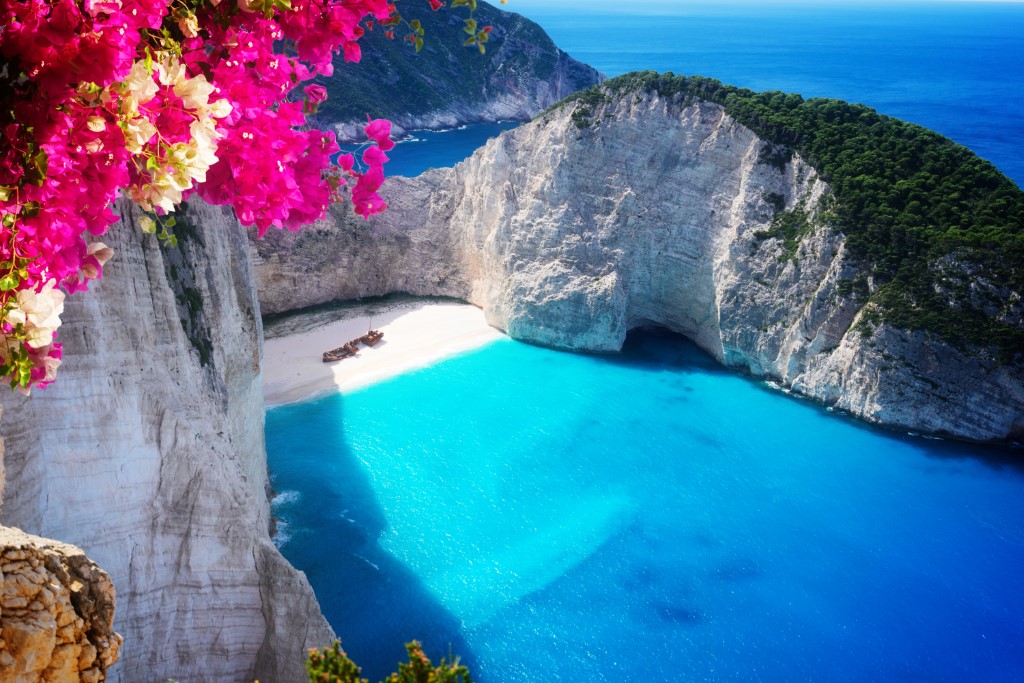 Mycenae, also referred to as the Archaeological Site of Mycenae, dates back to 1200 BC and is most well known for being featured in mythology. Now, it is a popular destination to visit and has connections to the Trojan War.

When visiting Greece, you have to try to visit at least one stadium. A lot of history happened in these stadiums. One of the most popular is the Panathenaic Stadium in Athens which was built in the 6th century BC by a Greek architect. It’s also completely built out of marble, and no other stadium in the world is.

Feta is the traditional cheese in Greece. You can buy it pretty much anywhere, including at local convenience or grocery stores. You could also try it when going out to a restaurant if you want to have it prepared by a top-notch chef. It can be purchased all over the country! 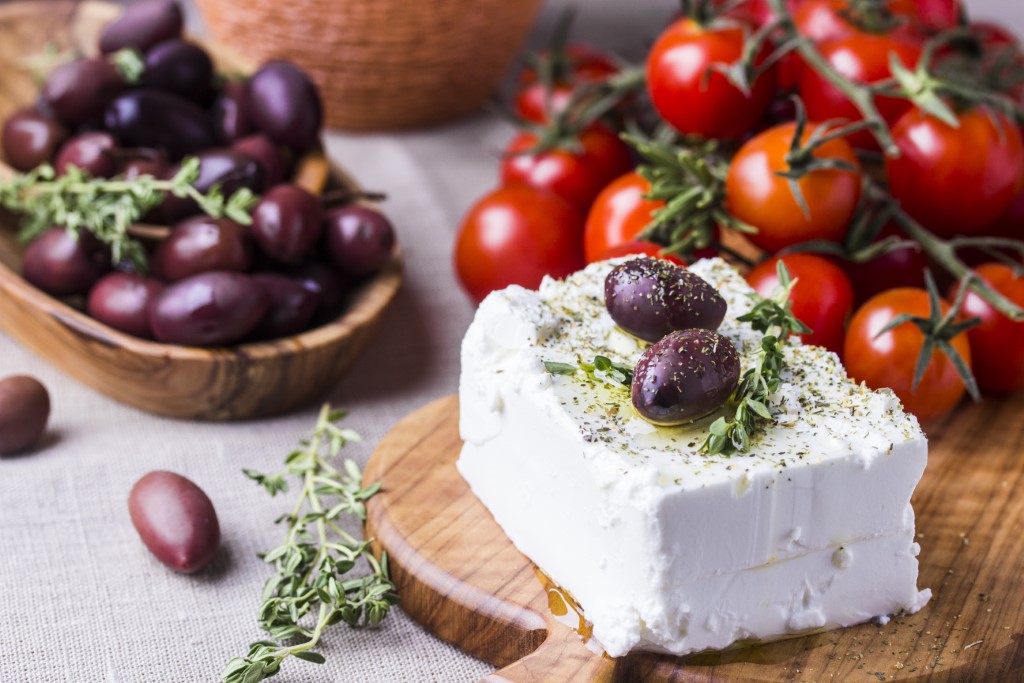 The oldest distillery in all of Athens is Brettos. The inside is entirely unique, with walls filled from floor to ceiling with old colorful bottles and ambient lighting. Even if you’re not a drinker, it’s fun to visit this bar just because of its history and pure fun.

10. Shop at the Athens Central Market

To experience living like a local, check out the Athens Central Market. You could buy almost anything you want here, including local produce and even souvenirs. The market can get bustling throughout the day, so try to visit right in the morning to avoid the crowds.

11. Learn at the Acropolis Museum

The Acropolis Museum is arguably the most popular museum in the country on this Greece bucket list. It’s solely focused on the Acropolis, which was mentioned earlier on this list. The inside is filled with tons of exhibits and artifacts that will leave you knowing everything you could want about the area.

The sunset in Santorini is unlike any other. Head to Oia for the most popular sunset spot, which overlooks the mountains and the iconic Santorini architecture. Try to get there early to get a spot before the area gets too busy! 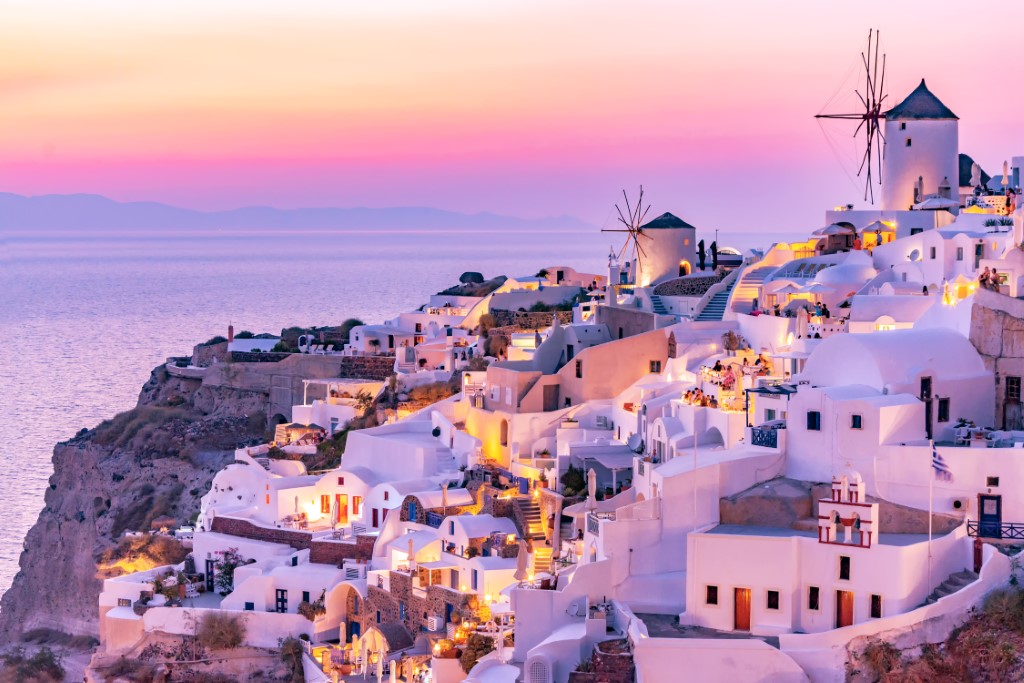 Beaches in Greece are on a whole other level compared to other countries in the area. Myrtos Beach is no exception! It’s on Kefalonia Island and is breathtaking. Mountains surround it, and the water is a gorgeous turquoise blue. 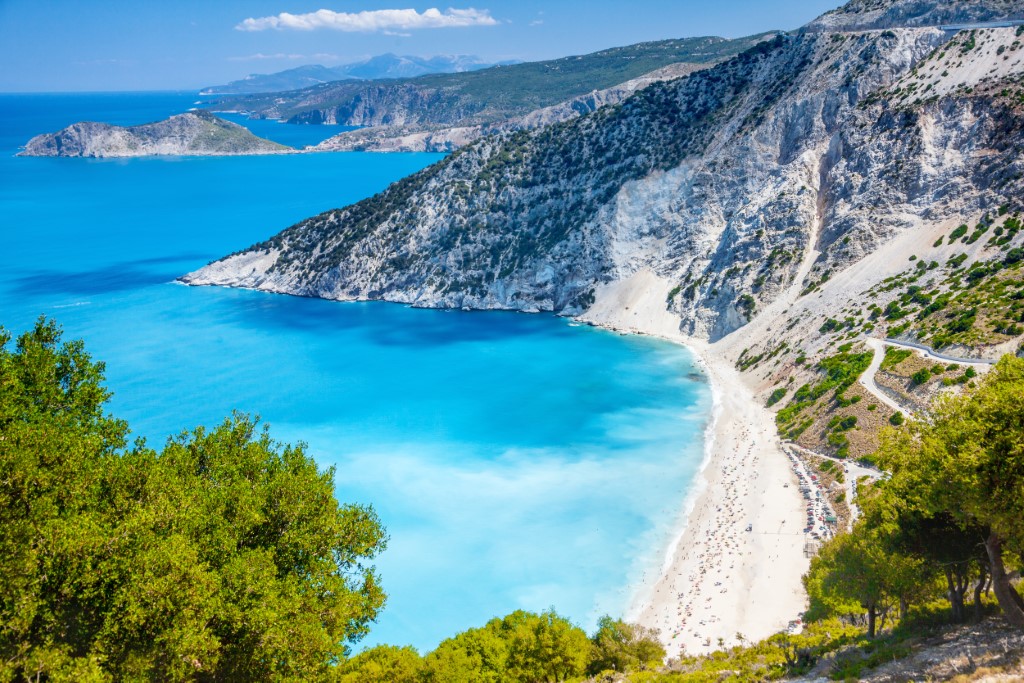 The Greeks know how to make fantastic coffee. Do you know the popular whipped coffee trend? That’s actually how a lot of the frappes are made at cafes in Greece! Head to one of the most popular Greece cafes, including Akrotiri Cafe, 1739 Terrasse Cafe, or Blue Parrot.

A panigiri is essentially a festival in Greece that’s dedicated to the country’s culture. It’s usually held in the summer on islands in the area. The festival is filled with great laughs, dancing, food, and even music. Your Greece bucket list would not be complete without attending one!

The water in Greece is breathtaking, and one of the best ways to enjoy the views and visit some of the nearby islands is to go on a boat tour. You could consider renting one out solely for you and your friends or family, but you could also go on a group tour which is usually a bit more affordable. 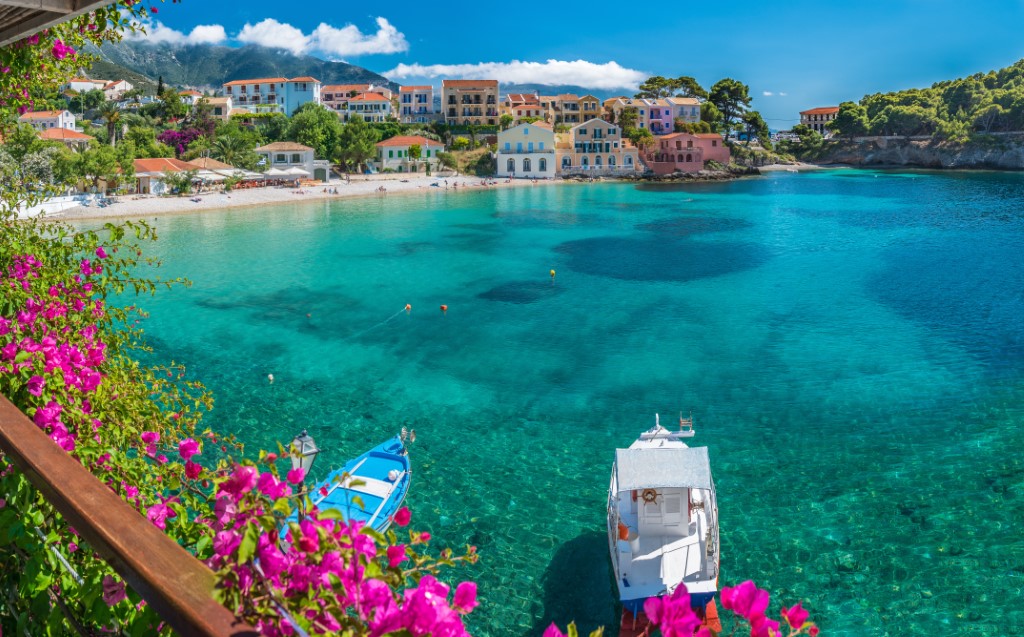 A city’s old town is the most historically significant part, and it’s truly worth visiting. Be sure to head to the old town in Corfu, which is right next to the Adriatic Sea. Walk the streets and head into some of the shops to meet the locals and learn more about the area. 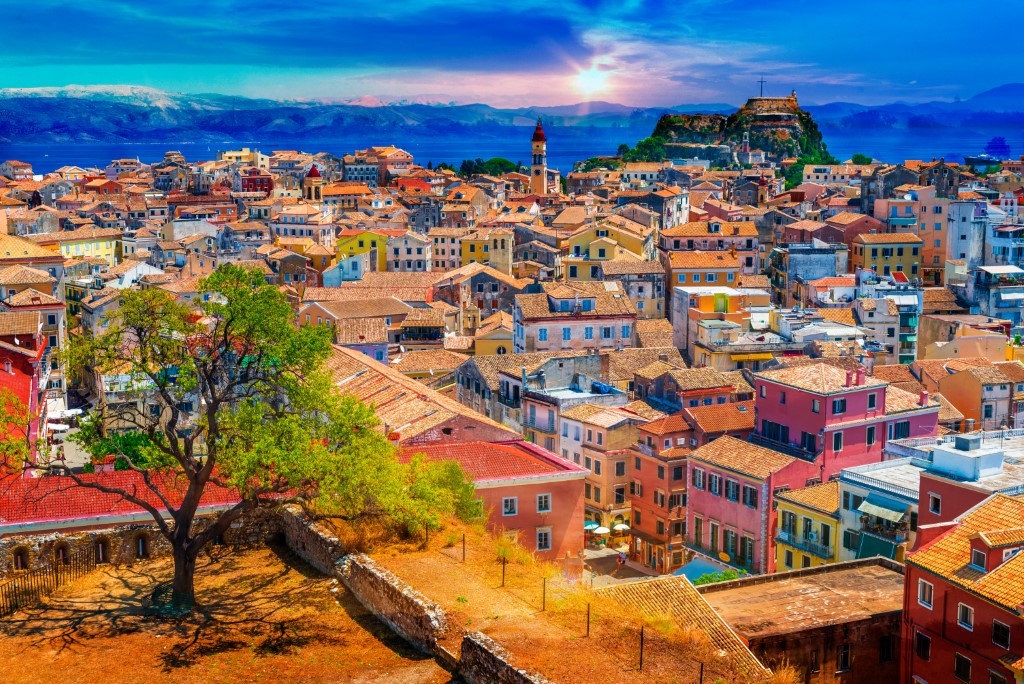 Rethymno, also called Rethimno, is located in Crete. This historic city is filled with lighthouses, museums, and local artists. It’s also home to the beautiful Rethymno Beach, which provides breathtaking views of the water.

18. Take a hike near the Dragon Lakes

The Dragon Lakes are truly beautiful and are also referred to as Draakolimni. They’re surrounded by mountains and will genuinely make you feel like you’re in the middle of Switzerland. Go on one of the nearby hikes to take in the views in a more memorable way.

19. See the windmills in Mykonos

This iconic spot is famous for photographers around the world. You cannot g to Mykonos and not see them. 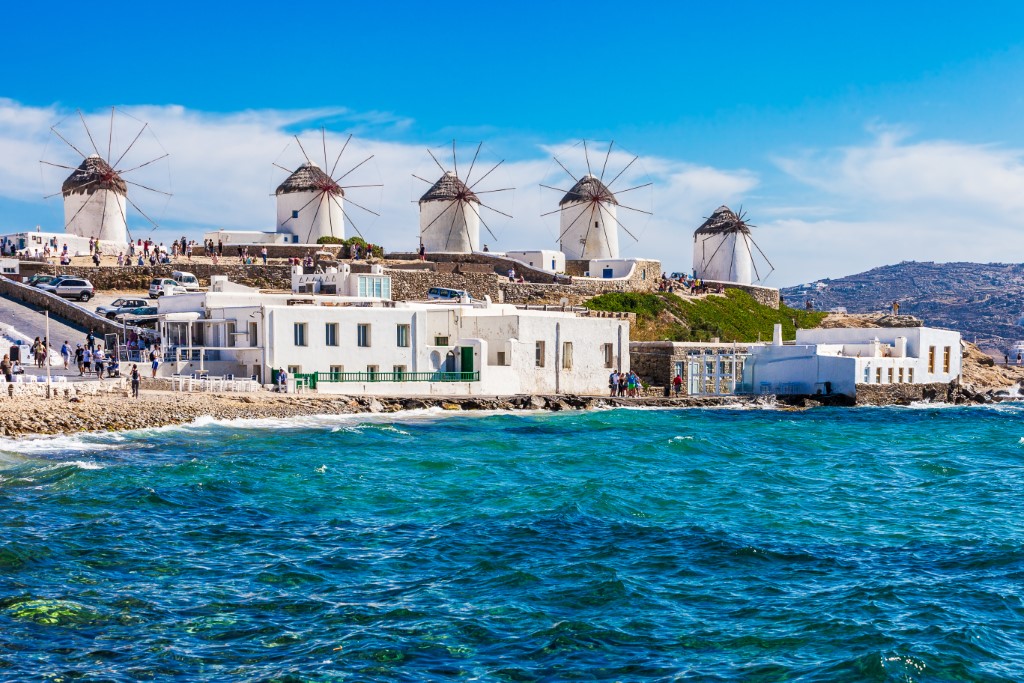 Gyro is a traditional Greek dish that can be found at most restaurants and cafes all over the country. They’re usually filled with meat and other additions, like vegetables or sauce. They can generally be purchased pretty affordably, too, especially if you get it to-go!

21. Attend a party in Mykonos

Mykonos is one of the most popular islands to visit on this Greece Bucket List. It’s most well-known for being home to some of the best parties in the whole country and is also filled with beautiful views, beaches, and sunset spots. Attend a party for a real fun time when visiting Greece!

Located in the northeastern part of Greece, Mount Athos is one of its most important aspects. It’s considered holy and is home to many different monasteries. The only way to get there is by taking a boat! 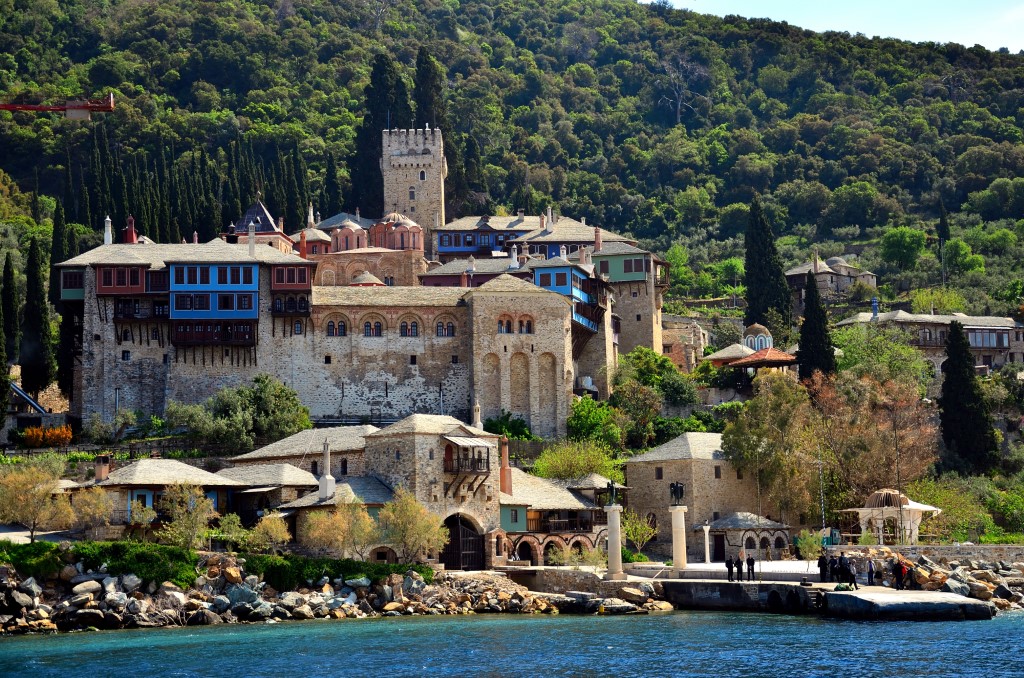 23. Soak up the views at Pelion

Pelion is a mountain in the northern part of Greece and offers some of the area’s best views. There are some great hikes that you can do to get to these viewpoints, each with different levels of difficulty.

One of the delicacies in Greece is olive oil. It’s said to date back thousands of years in the country and should be tried at least once when following this Greece bucket list. Some people say that it’s even better than the olive oil in Italy!

25. Go on a boat tour on Melissani Lake

This Greece bucket list wouldn’t be complete without mentioning the popular destination of Melissani Lake. It’s a gorgeous cave with bright blue water .that can be reached by going on a boat tour. These usually take a few hours, but the views are so unique and breathtaking that it’s well worth it. 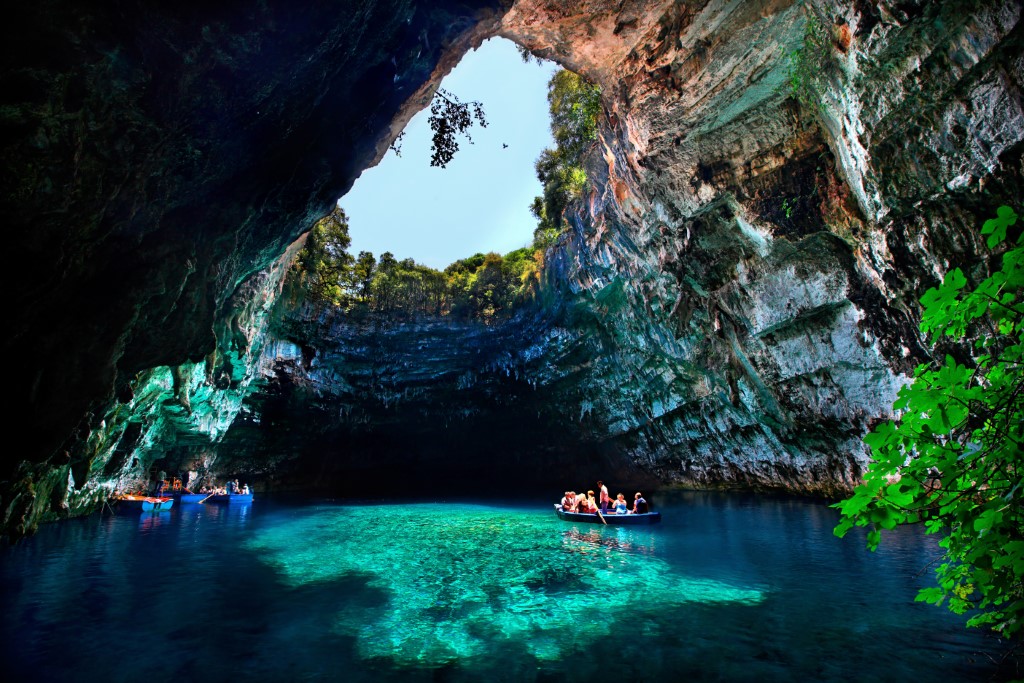 Mount Olympus is arguably the most popular mountain to visit in the country because it’s the highest. You can also hike along the hill and get great views along the way. When visiting, be sure to situate yourself in Thessaloniki, which is nearby.

27. Walk around the National Garden

The National Garden is one of Greece’s state parks, located in Athens. It covers 38 acres of land and is filled with gorgeous trees, plants, and flowers. This is the perfect place to visit for a relaxing time out that’s not filled with history and culture!

This island is breathtaking, no matter which village you decide to visit. It’s also surrounded by a few other islands which make great day trips. If you ever see photos of this island, you might recognize it. Parts of Mamma Mia! were filmed here!

Pink sand beaches are iconically one of the most popular places to take photos, no matter which country you’re visiting. Luckily, there’s one in Greece on the island Elafonisi! Instead of the water being pink, the sand itself is pink here. 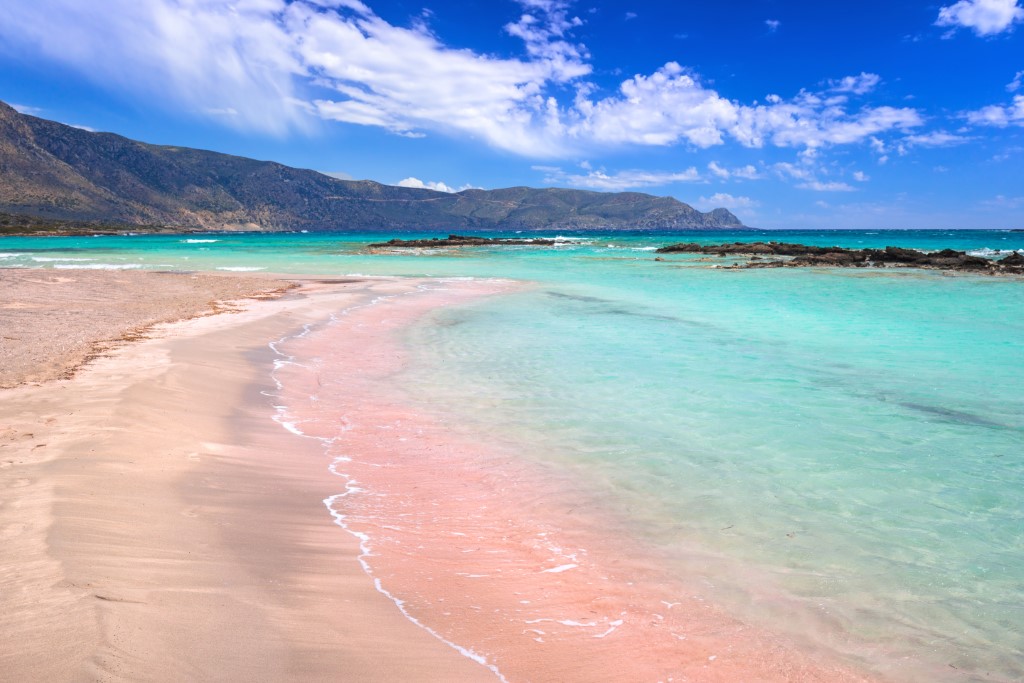 Finishing off this Greece bucket list is Meteora, a monastery. It was deemed a UNESCO World Heritage Site in 1988. Usually, guests find that they need at least a few days to visit these iconic monasteries, as there are six different ones located here. 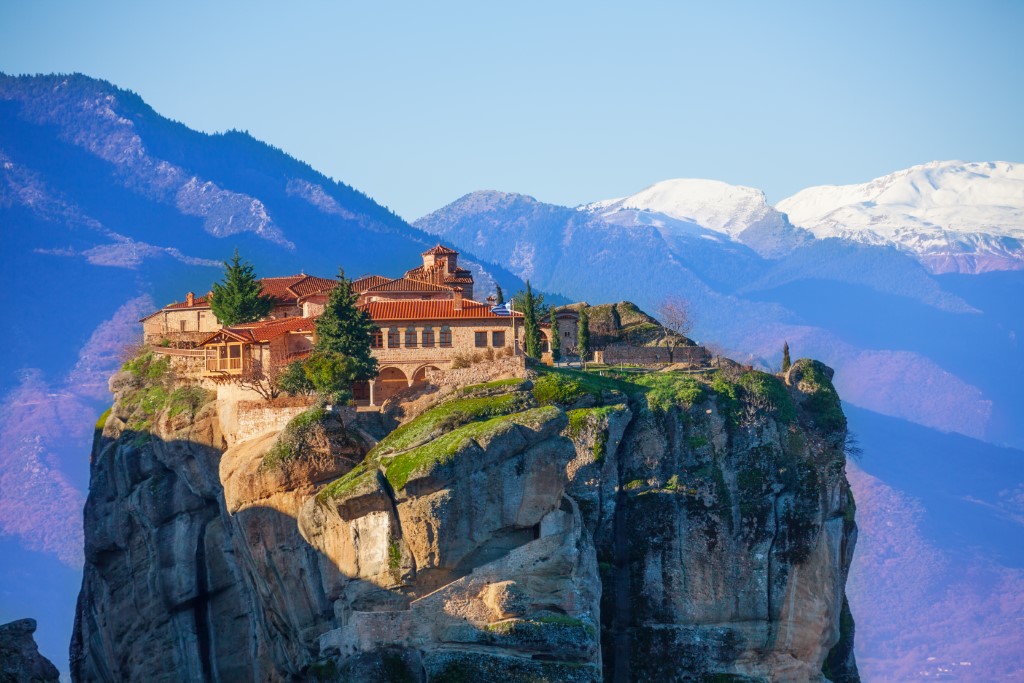 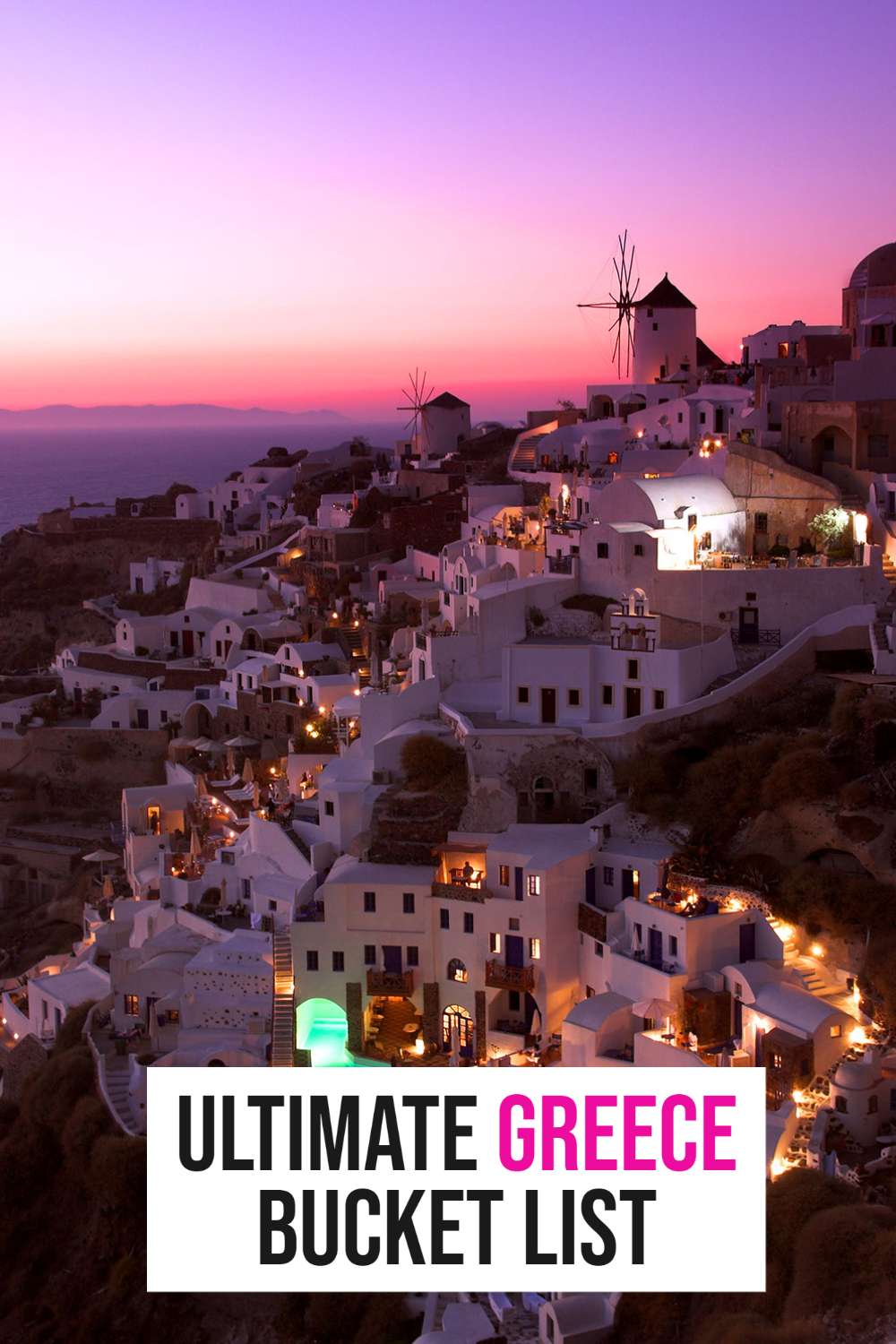