Looking for things to add to your Barcelona bucket list? Look no further! We have gathered all the best things to do in this Spanish city to keep you busy on your trip. Spain has long been a top bucket list destination for many, with many cities and attractions atop the lists of visitors.

This European bucket list destination has everything from stunning architecture, dancing, food, wines, and more! 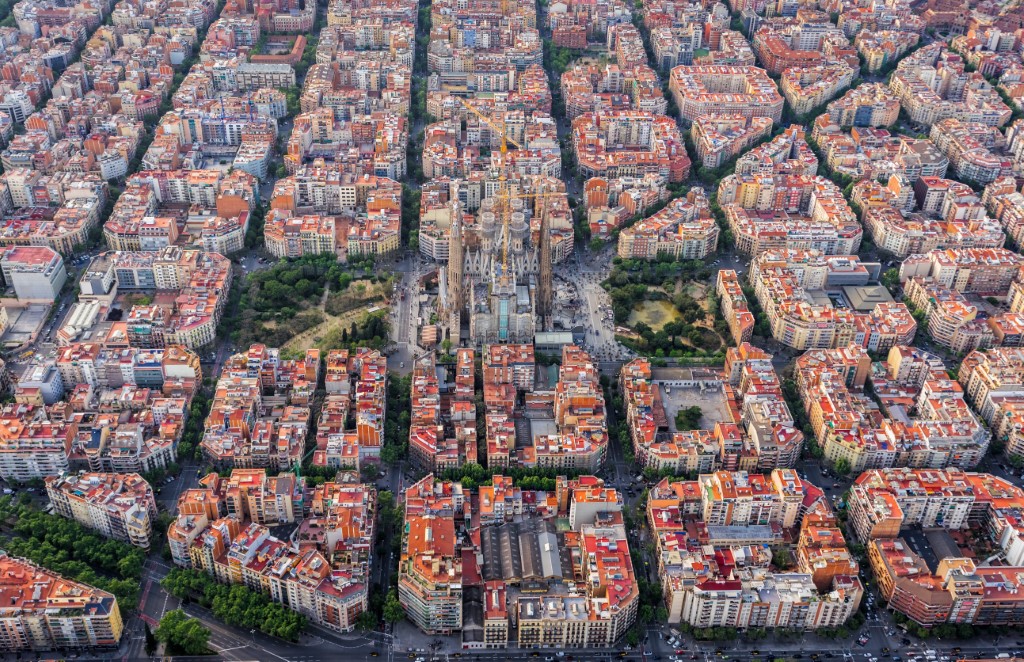 Best things to do in Barcelona: 53+ Barcelona bucket list ideas

1. Snap a photo at Park Güell

Located a bit higher than the rest of the city, Park Güell is one park filled with art by Antoni Gaudí that should be added to your Barcelona bucket list. The true beauty is in the Monumental Zone! 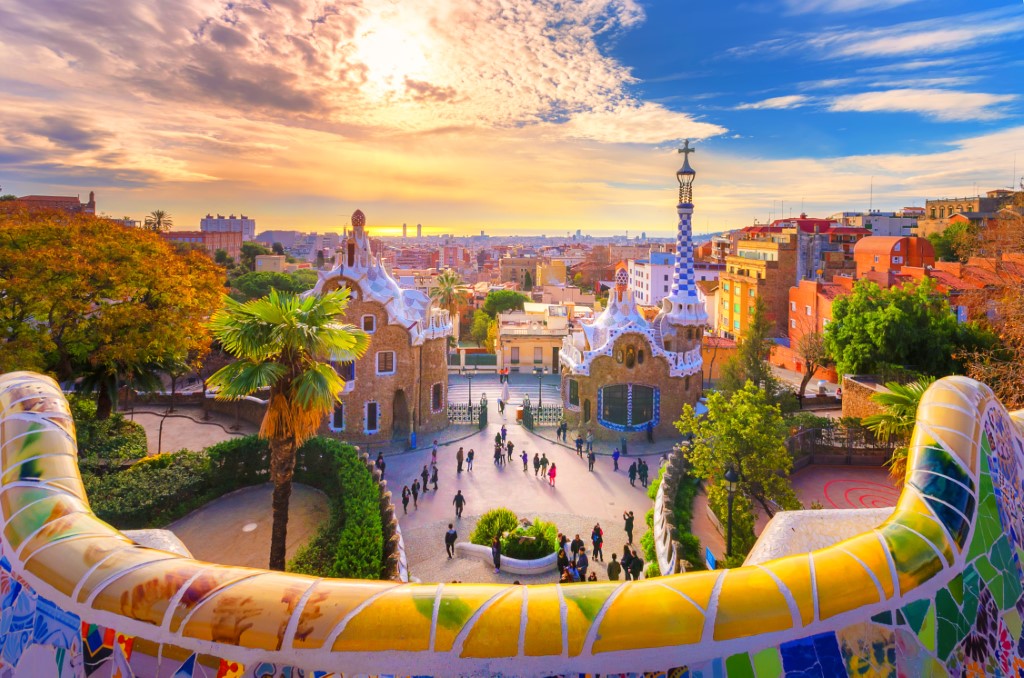 2. Take a day trip to Mataro

One hour north of Barcelona is Mataro, a quaint seaside town with beaches that aren’t as busy as Barcelona’s. For a taste of small-town life in Spain, head here!

Mercado de La Boqueria is a huge food market filled with delicious treats! There’s nothing better to buy here than fresh fruit from a local vendor on a hot summer day.

This open-air museum is underrated and is the best way to get introduced to Spanish architecture and culture. Built for the 1929 World’s Fair, this museum is filled with details.

5. Hang out at Plaça Reial

Head to Plaça Reial, a bustling square in Barcelona’s Gothic Quarter. This is the perfect place to hang out with lots of seating while checking out the square’s fountains. 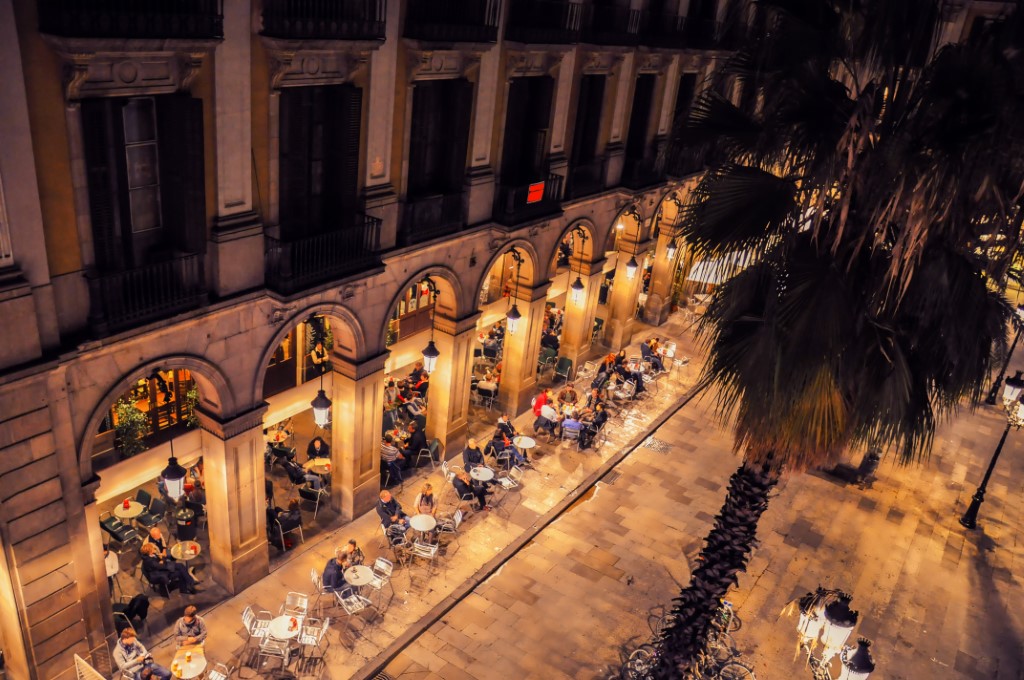 6. Marvel at the Columbus Monument

The Columbus Monument is a 197-foot statue built to commemorate Columbus making his way to the Americas. While Columbus is a controversial figure, it’s still worth seeing.

At the Gaudí House Museum, you can learn more about Gaudí’s life. Plus, the museum is situated inside of his home, where he lived for nearly 20 years.

8. Go inside the Sagrada Familia

An absolute can’t-miss on this Barcelona bucket list is the Sagrada Familia, one of the most iconic churches in Spain. It was designed by Gaudí and is still not finished today! 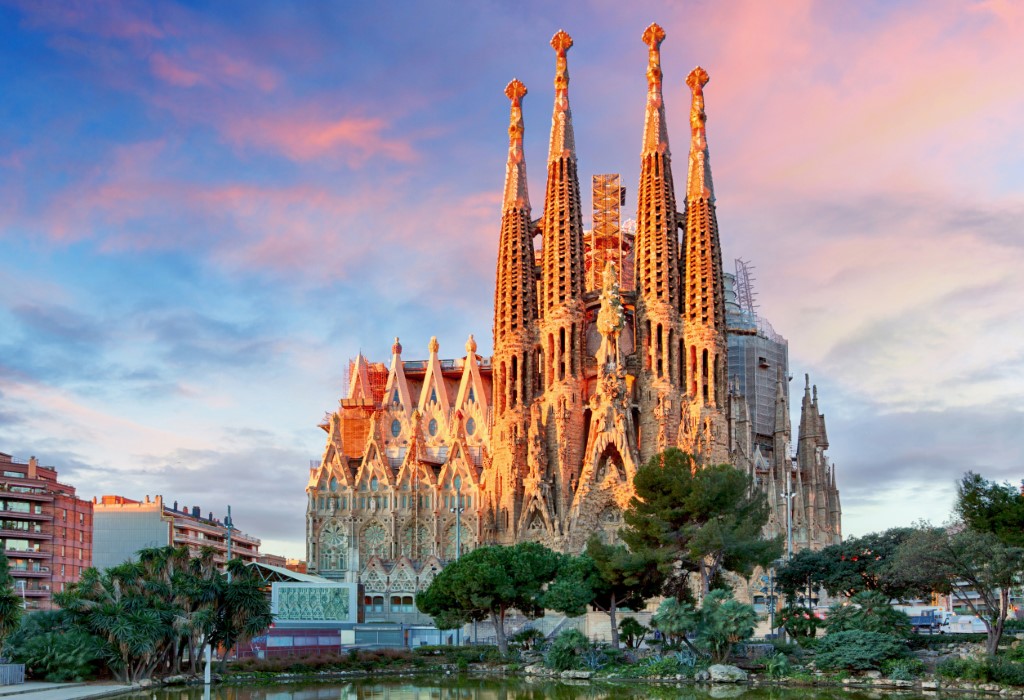 9. Have fun at Tibidabo Amusement Park

Arguably, Barcelona’s best place to have fun is at Tibidabo Amusement Park, located high above the city. It’s one of the oldest theme parks still in use.

10. Watch the boats at the Port of Barcelona

The Port of Barcelona is the main ship port in the city, which has been used for thousands of years. It’s fun to come and watch the boats come and go while visiting Barcelona.

11. Learn at the Picasso Museum

Pablo Picasso is one of the most famed Spanish artists. The Picasso Museum is filled with more than 4,000 of his greatest pieces and shouldn’t be missed, even if you don’t like art!

While it’s a lot less visited than Mercado de La Boqueria, Santa Caterina Market is still worth visiting. It’s filled with tons of vendors selling food and souvenirs, and the building itself is breathtaking.

Visit Barcelona’s own Arc de Triomf, which was built to be the entrance to the 1888 Universal Exhibition! It’s located by Parc de la Ciutadella and is genuinely marvelous and detailed. 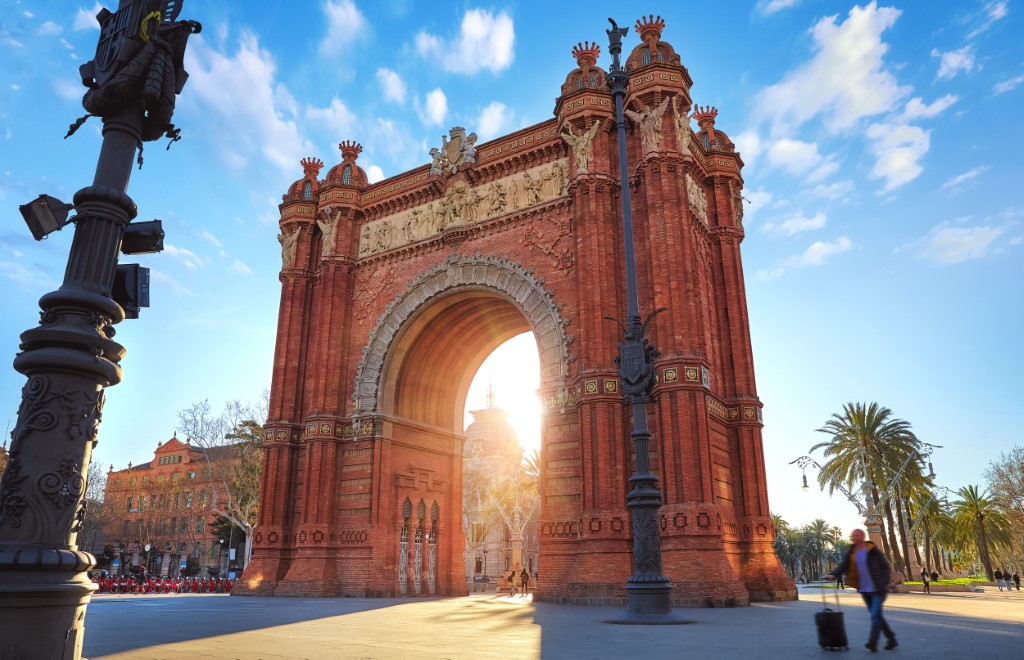 14. Eat your heart out with tapas

Think of tapas as a Spanish appetizer, which can include everything from seafood to croquettes. Head to Palosanto or Tapeo, two of Barcelona’s best tapas bars! 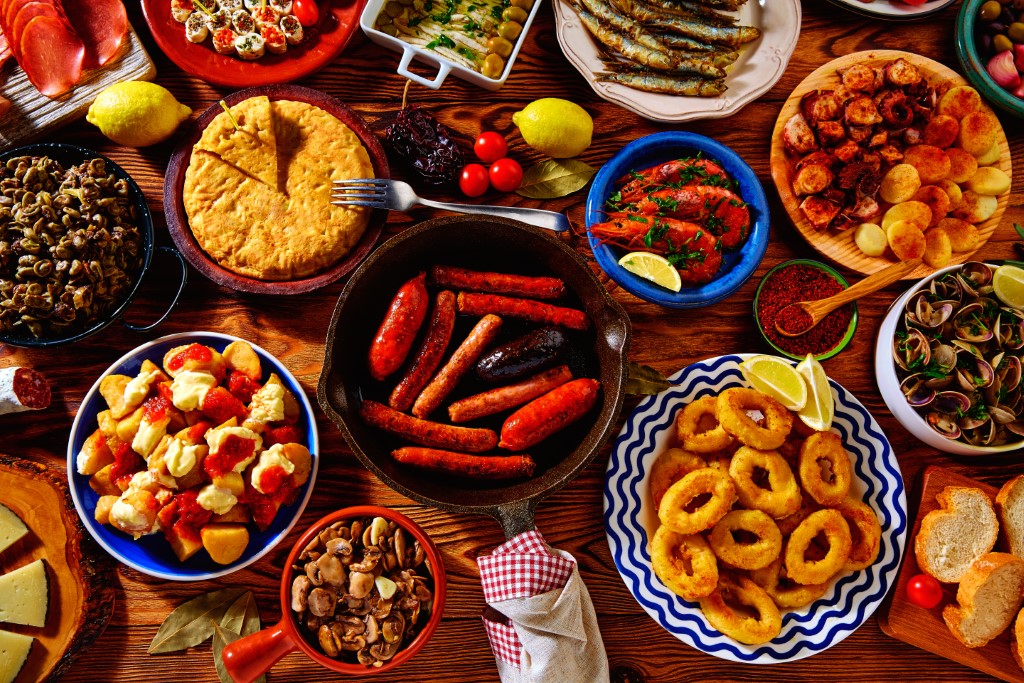 This is the museum to go and learn about Catalan art and is one of the most famous museums in Spain. You can’t miss it, so add it to your Barcelona bucket list!

The Parc del Laberint d’Horta is a park filled with a labyrinth dating back to the 18th century. There are neoclassical elements throughout, which sets it apart from Barcelona’s other green spaces. 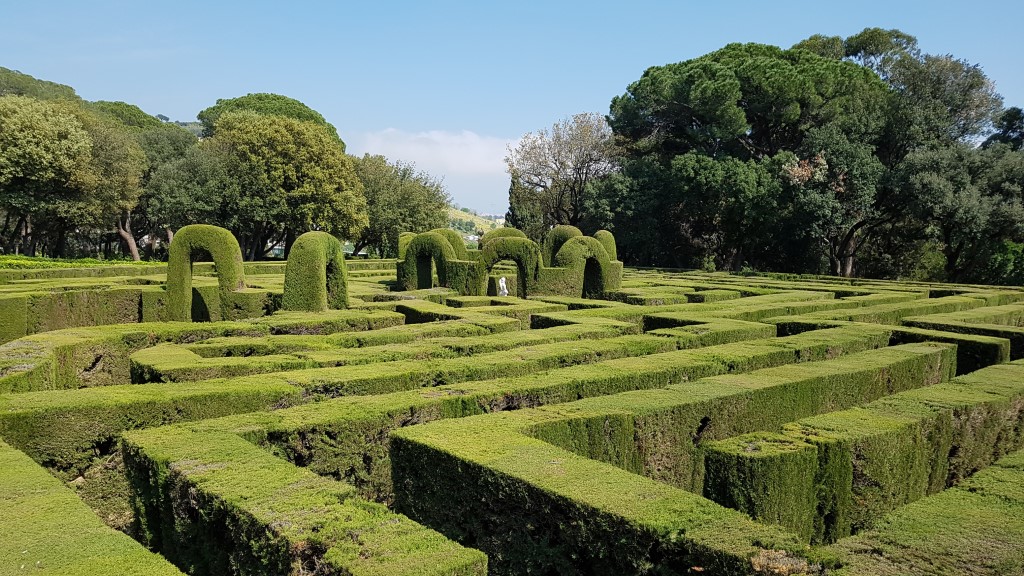 Take some time to explore the Gothic Quarter, one of Barcelona’s best neighborhoods! There are fun cobblestone streets, galleries, and restaurants around every corner.

Santa Maria del Maris a breathtaking 14th-century church that tourists often overlook! The inside is glorious, with impressive vaulted ceilings.

Gaudí’s Crypt is an Art Nouveau building that Gaudí never finished. He mainly built it for people in the nearby area to come and worship.

Plaça de Sant Jaume is a big plaza located in the older part of Barcelona and is surrounded by lots of important governmental buildings. This is a great area to walk around and see what you might find. 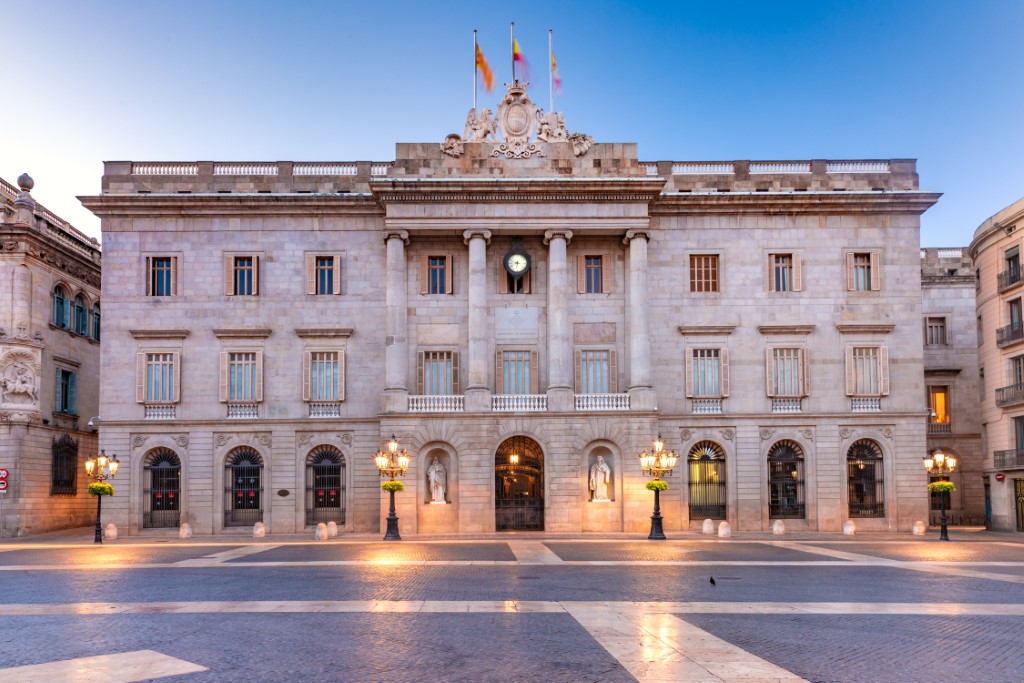 Football (or American soccer) is huge in Spain, so why not get involved with the local sports culture and attend an FC Barcelona game? By the end of the match, you’ll be a converted football fan!

Think of churros con chocolate as warm churros served with a side of thick hot chocolate! You can get this dish all over the city, but some of the best places include Xurreria Laietana and La Pallaresa Xocolateria Xurreria. 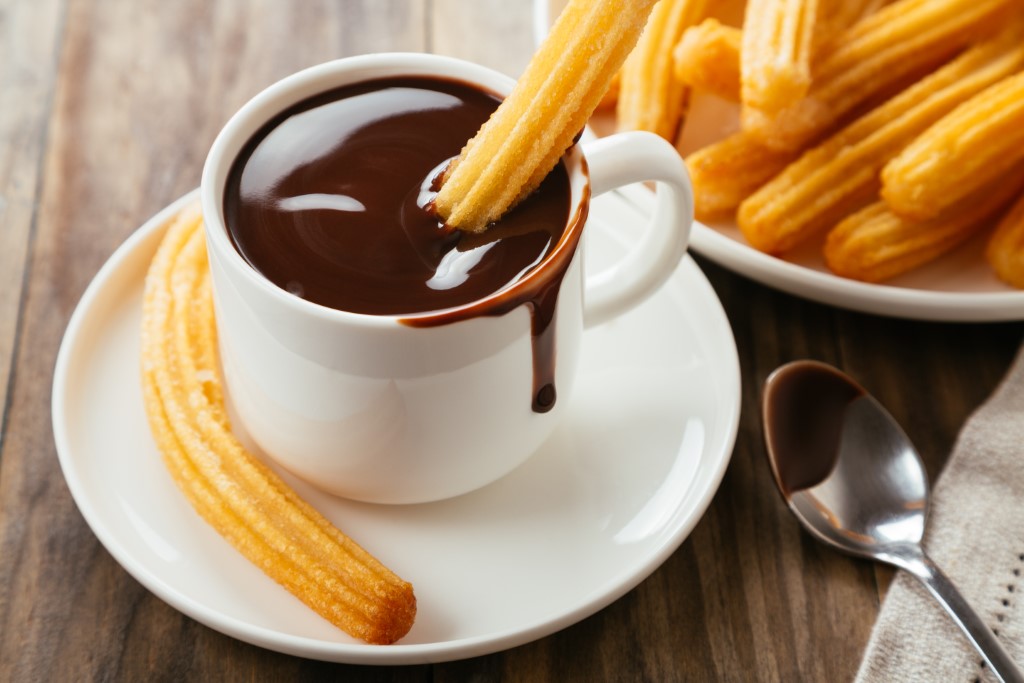 23. Go to the chocolate museum

Do you like chocolate? Then add Museu de la Xocolata to your Barcelona bucket list! This museum is dedicated to all things chocolate and will educate you on chocolate’s history.

Güell Palace is another of Gaudí’s masterpieces. This one is a mansion built for Eusebi Güell and is a fantastic example of Barcelona’s Art Nouveau architecture.

To learn more about Barcelona back to early Roman times, head to The Barcelona City History Museum. From exhibits to artifacts, you’ll leave knowing a lot more about the city.

26. Check out the art at Fundacio Joan Miró

The art at Fundacio Joan Miró is incredible! It’s filled with modern artwork and fantastic views looking down on the city from its outdoor garden spaces.

27. Take a stroll down La Rambla

Walk down La Rambla, the most famous street in all of Barcelona. The road is pedestrian-only and is lined by shops and restaurants to keep you entertained for at least a few hours. 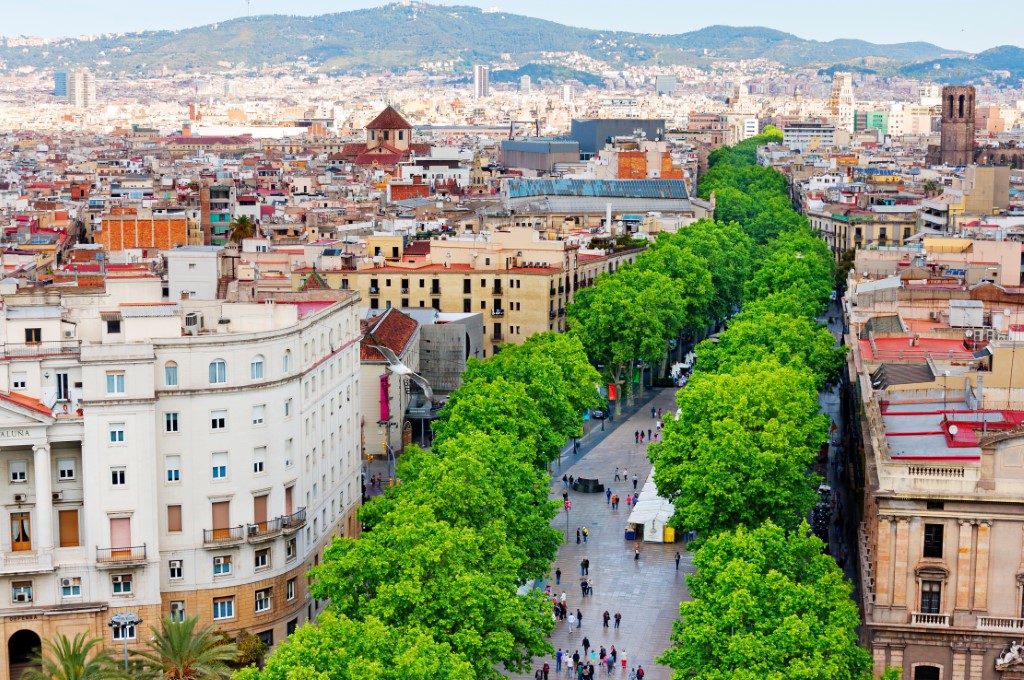 28. See the architecture of the Palau de la Música Catalana

A lesser-visited landmark on this Barcelona bucket list is Palau de la Música Catalana, a truly out-of-this-world music hall. The inside is filled with stained glass art pieces and mosaic detailing!

Flamenco is one of the most popular forms of dance in Barcelona. Take the time to learn how to do it yourself, or if you’re not a dancer, head to see a flamenco show at either Tablao Flamenco Cordobes Barcelona or Tablao de Carmen! 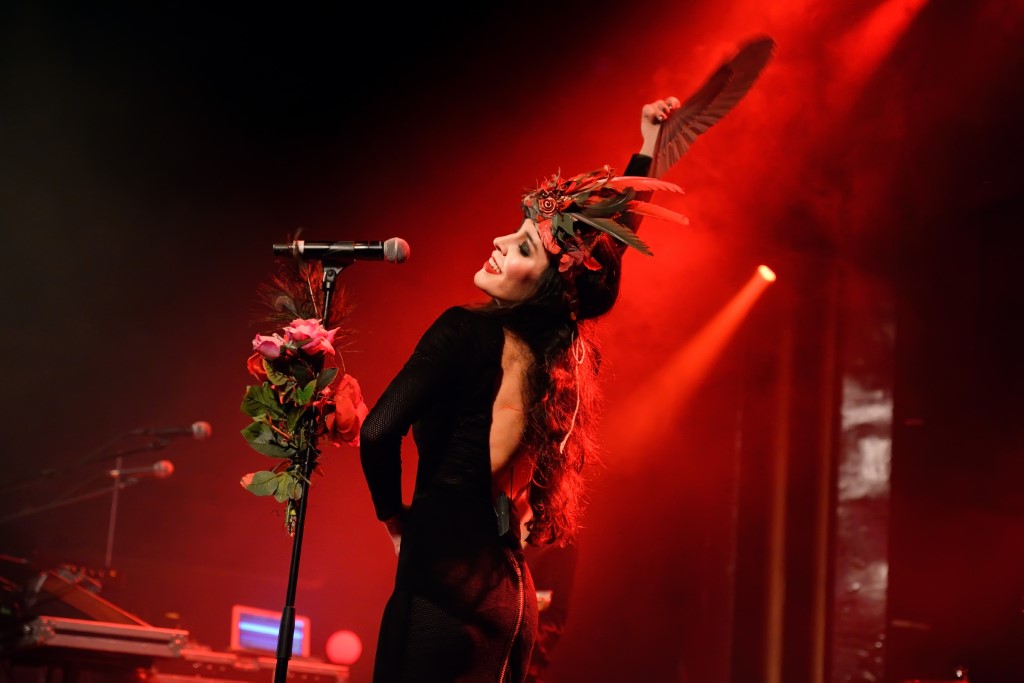 When visiting Barcelona, you have to try this delicious drink at least once! You can buy sangria at almost any tapas bar or restaurant throughout the city, usually for less than €5. 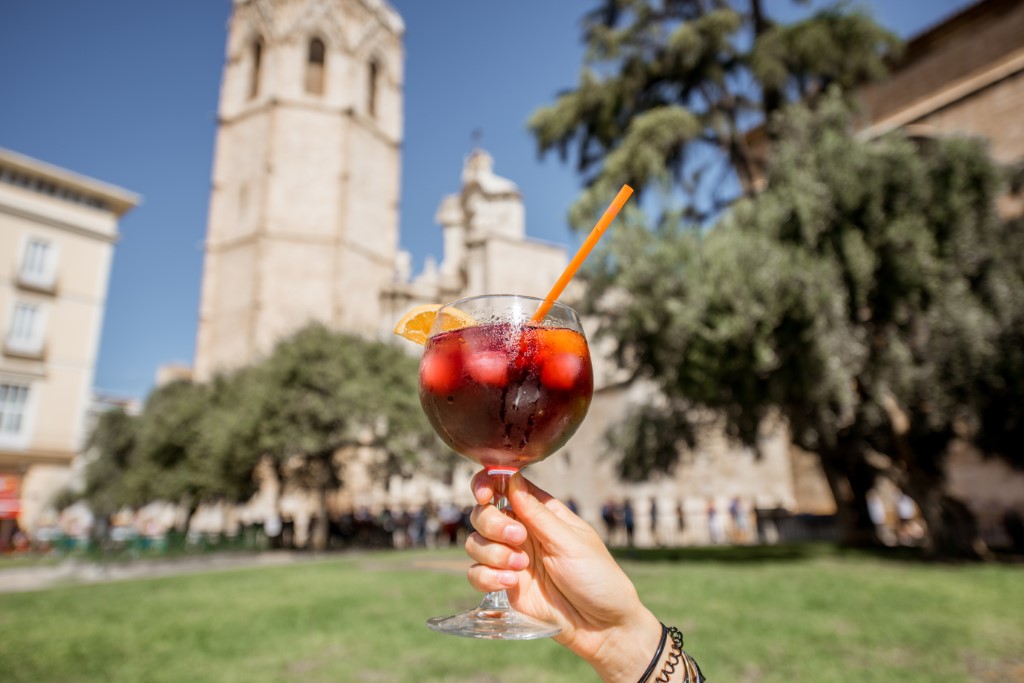 Casa Milà is one of Gaudí’s most impressive architectural pieces that’s often called La Pedrera. It was one of the last pieces he built, and the inside is truly incredible.

Museu d’Art Contemporani de Barcelona, or the Barcelona Museum of Contemporary Art, is a museum filled with modern artworks. Even if you aren’t an art fan, you’ll surely find a piece that resonates with you here.

One of the top-rated parks on this Barcelona bucket list is the Parc de la Ciutadella! This massive green space is surrounded by museums, fountains, and other landmarks like the Arc de Triomf.

Montserrat is the mountain range near Barcelona that makes a perfect day trip from the city! The beautiful village nearby is filled with charming restaurants and shops that you won’t want to miss. 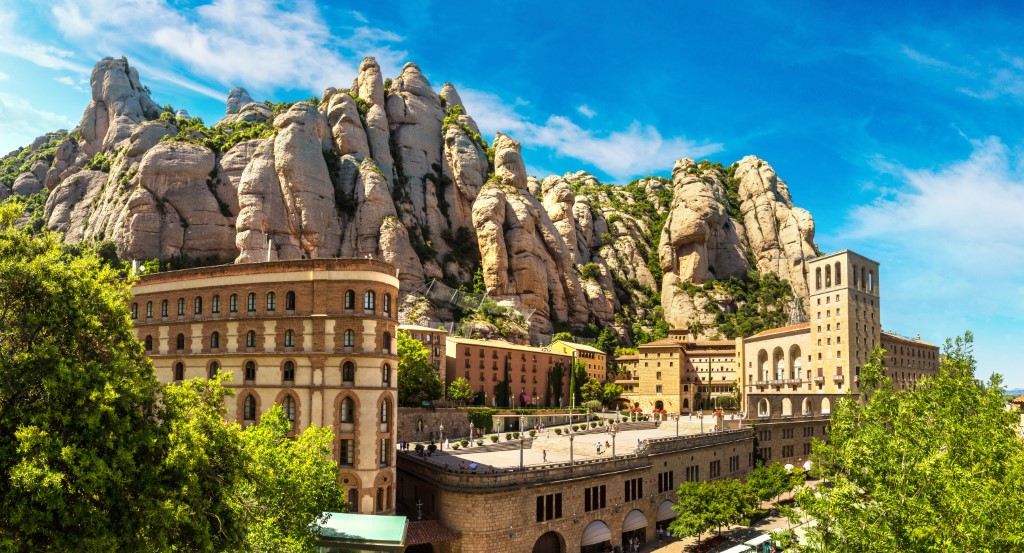 The Aquarium Barcelona is a significant landmark to visit if you’re traveling with a family. Young kids will learn learning about ocean life in this area of Spain! Plus, there’s an entire tunnel where you’ll be surrounded by sea life in the aquarium.

For some of the best views on this Barcelona bucket list, take a 3-hour hike to the top of Montjuïc. This famous mountain is also where Montjuïc Castle is located, and you may pass some significant landmarks along the way.

Visit the Montjuïc Magic Fountain for an amazing fountain show at night! The entire fountain lights up and moves to the music that’s playing. Even adults will love this entertainment. 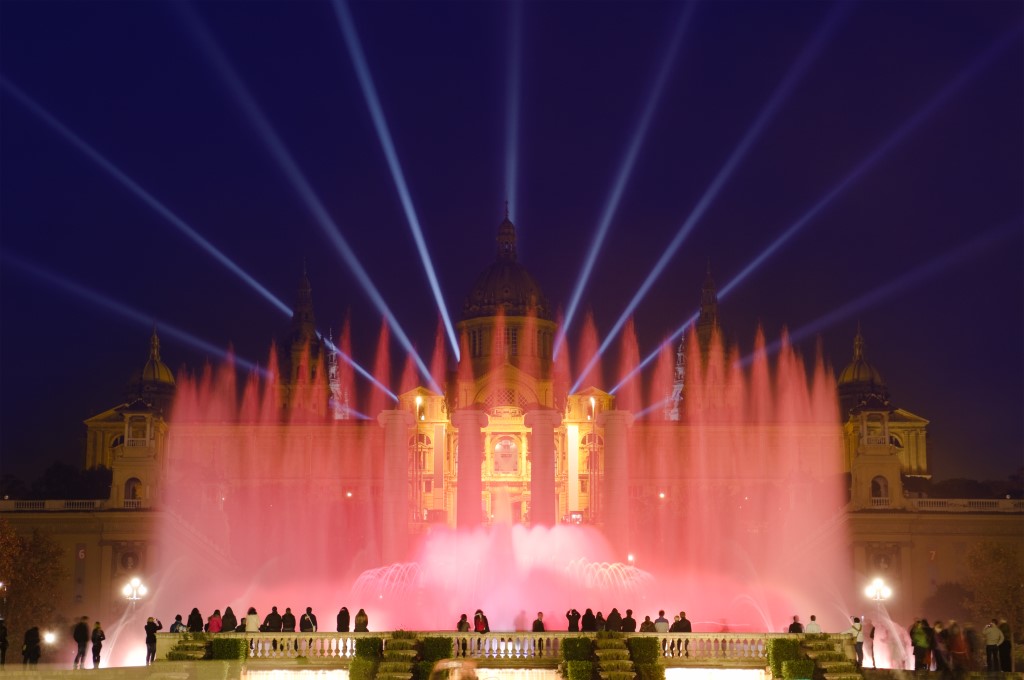 This 5.6-mile walking path is quite underrated but allows you to get some of the best views of Barcelona and the surrounding mountains. You can either walk it or bike it!

Another of Gaudí’s impressive architectural projects is Casa Batlló, which is covered in colorful mosaic pieces on the outside. The inside is filled with shapes and colors that are reminiscent of the ocean. 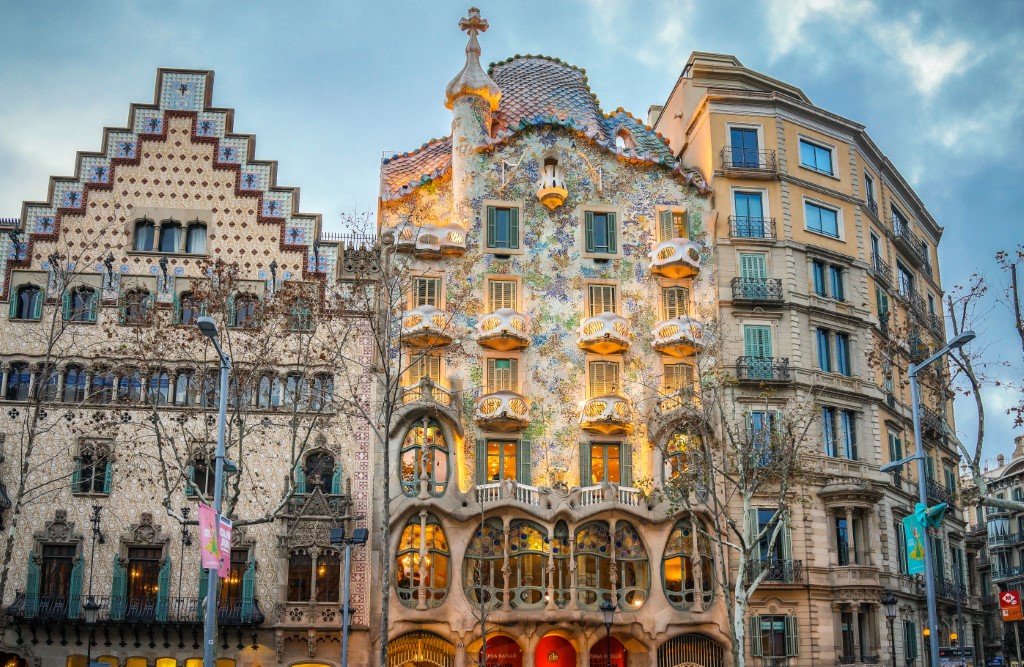 40. Go on a Gaudí walking tour

Instead of making your way to every Gaudí landmark yourself, consider going on a walking tour. These are usually run by locals, and some of them are even free.

Primavera Sound is Barcelona’s own music festival that takes place annually! It usually happens right at the beginning of summer and lasts for a few days, showcasing many great artists like Tame Impala and Doja Cat.

The view from the Bunkers del Carmel is genuinely one of the most magical views of Barcelona from above. If you look closely, you can even see out to the sea!

If you’d rather not go around and find the best places to eat on your own, consider going on a food tour! This way, a local will bring you to all of the top restaurants in the city.

44. Find the Woman and Bird statue

The Woman and Bird Statue is one of the best sculptures on this Barcelona bucket list. It was created by a local artist and is colorful!

Paella is a traditional Spanish dish made of rice, vegetables, and either chicken or seafood. It’s available at almost every Spanish restaurant throughout the city! 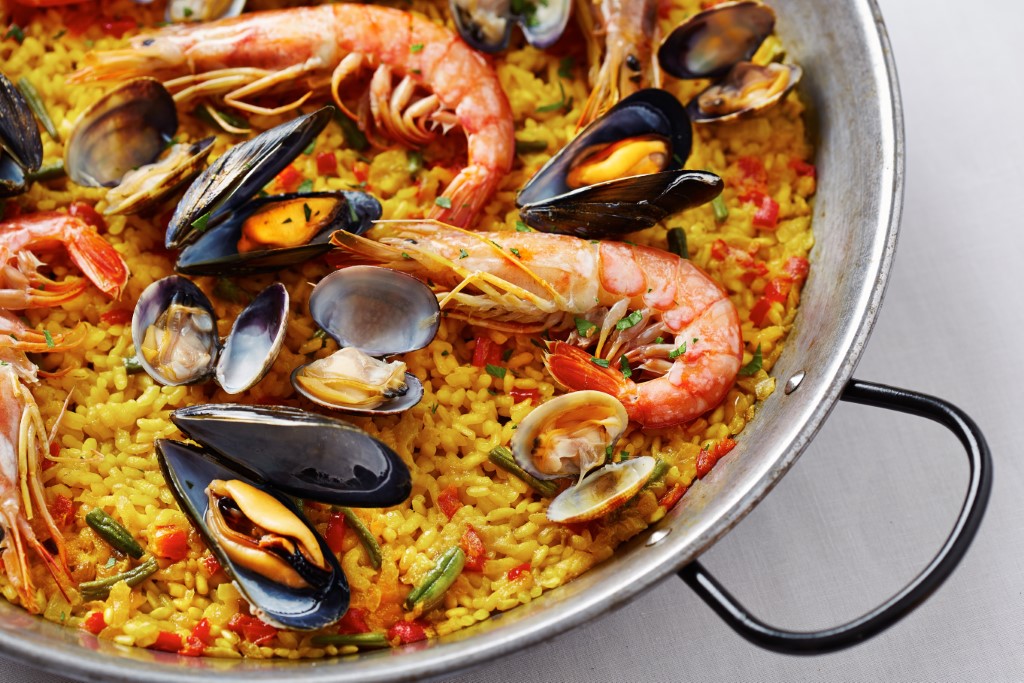 Casa Vicens is a colorful house in Barcelona that has since turned into a museum. It’s unlike any other buildings in the city, so it deserves a spot on your Barcelona bucket list.

47. Soak up the view from Turo de la Rovira

Make your way to the top of Turo de la Rovira and sit on the rocks for a great view of Barcelona. This is also a great spot to catch the sunset.

48. Dip your toes in the water at Barceloneta Beach

Head to one of the beaches on La Barceloneta to relax in the sunshine on the coast of Barcelona. Even though these beaches get busy, they’re so beautiful! 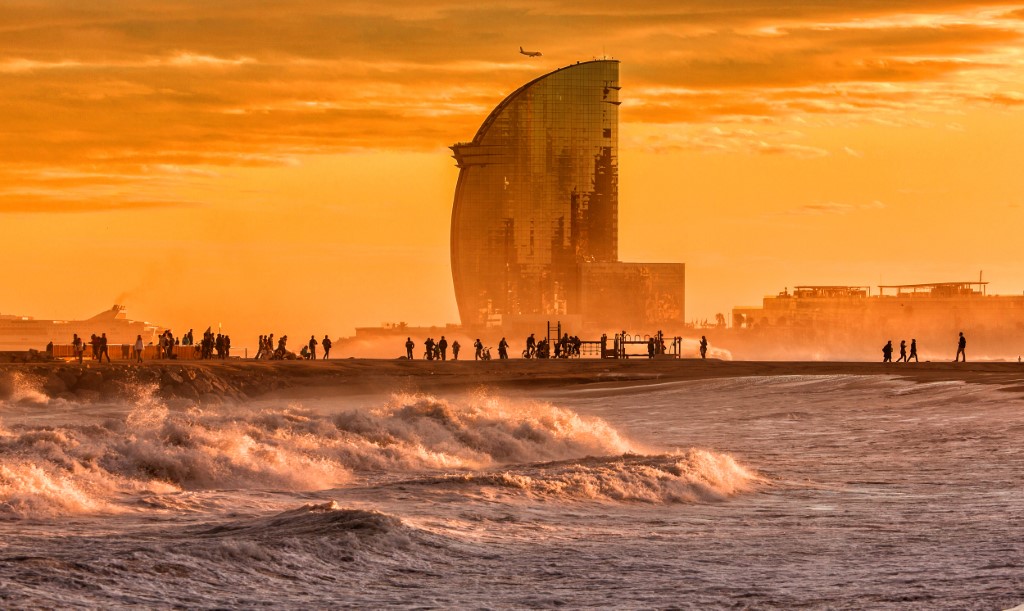 49. Have a drink at The Bar Marsella

The Bar Marsella is the oldest bar in Barcelona that you won’t want to miss on this Barcelona bucket list! Hang out with friends, mingle with locals, and have a drink.

The Mercat dels Encants Barcelona is a massive flea market in Barcelona that is the perfect place to mingle with locals and shop for souvenirs or clothing.

Take a ride on the Barcelona cable car to get to Montjuïc Castle! Even if you don’t want to go to the castle, the cable car’s views are unbeatable.

52. Take in the views from the botanical garden

Jardi Botanic is one of Barcelona’s most extensive botanical gardens, and it’s filled with epic flora and fauna that make for a peaceful afternoon.

Bellesguard is a castle created by Gaudí that looks a little more traditional than his other works but is filled with his characteristic mosaics and fun shapes.

Barcelona Cathedral is located in the Gothic Quarter and is more of a traditional-looking European church, but it’s still filled with beauty. This is also a popular spot to listen to local artists in the nearby square! 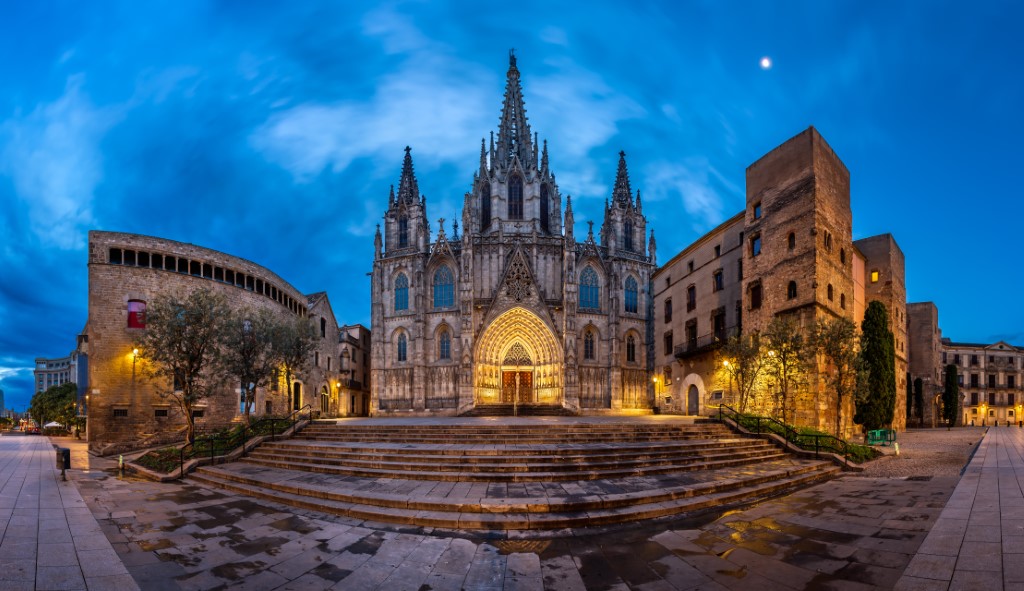 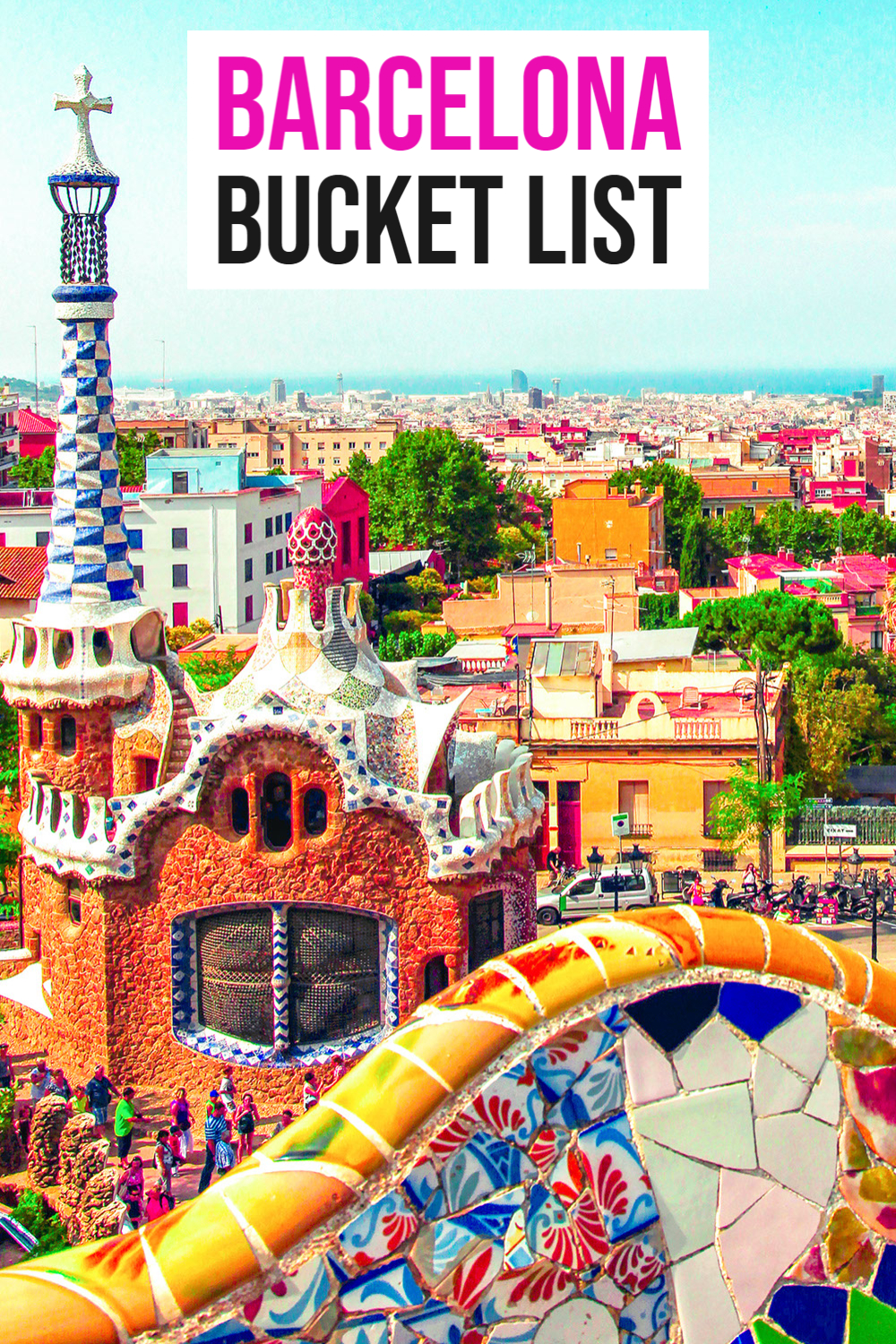