Looking for things to add to your New Orleans bucket list? This comprehensive guide has all the fun things to do in New Orleans to keep you busy while visiting the Crescent City!

While New Orleans is known for Mardi Gras, gumbo, Jazz, and Bourbon Street, the city has so much more to offer. As a top USA travel destination, we think this is the best list of things to do and if you can’t complete it on one visit, plan to return. 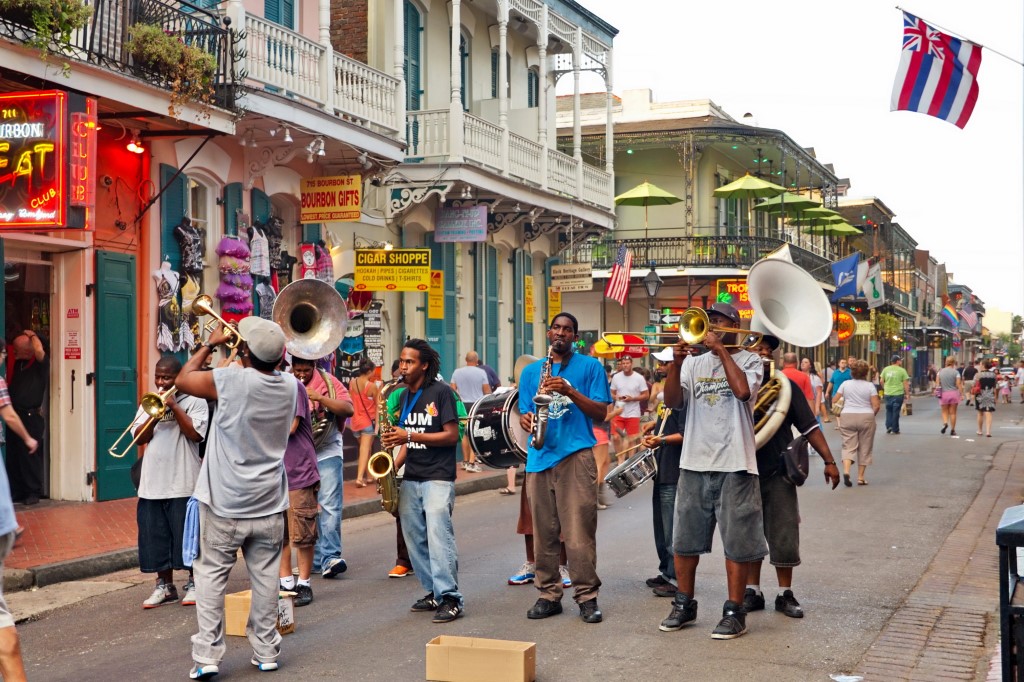 Cafe du Monde is arguably the best place to eat in all of New Orleans. They’re most famously known for their French beignets, which people travel from all over the country just to eat. A beignet is essentially a bite-sized piece of fried dough covered in sugar. What’s not to love? 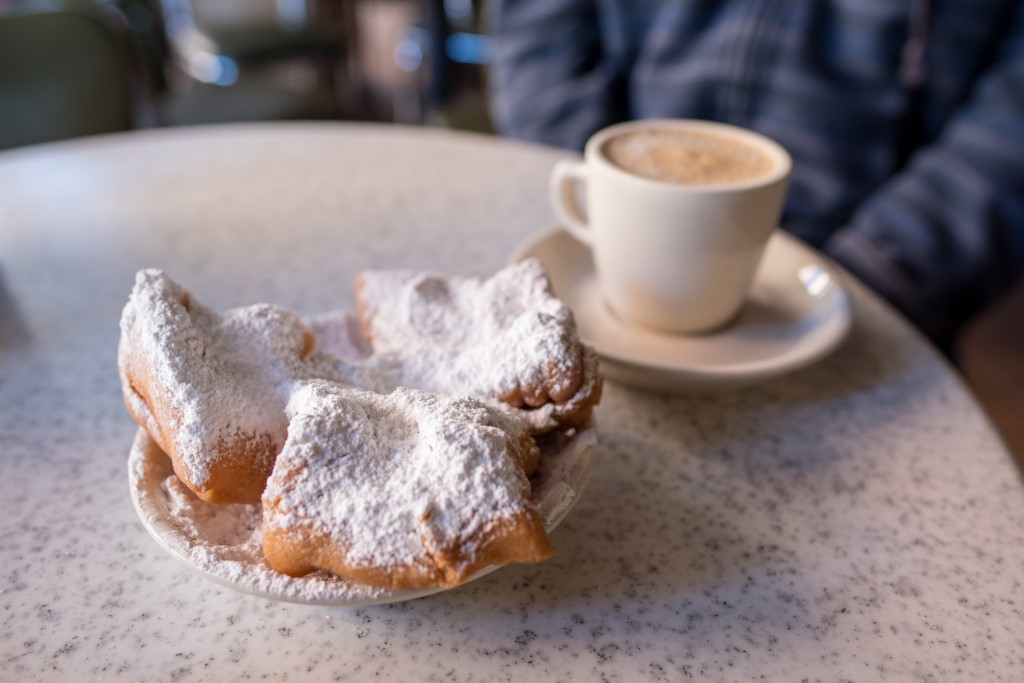 The New Orleans Botanical Gardens are truly breathtaking and provide the perfect escape from the city. It’s filled with beautiful plants and flowers. Plus, the gardens often host lots of live music throughout the year. Imagine listening to your favorite band surrounded by beauty!

Don’t let the word “swamp” repel you! One of the best things to do on this New Orleans bucket list is to go on a swamp tour. There are tons of different companies in the city that offer this tour, and some even let you kayak right on the swamp.

The St. Louis Cathedral is one of the most iconic buildings on this New Orleans bucket list. It was built in the eighteenth century and is named after Louis IX, the King of France at the time. It’s located right next to Jackson Square and, despite having an unassuming exterior, is gorgeous inside. 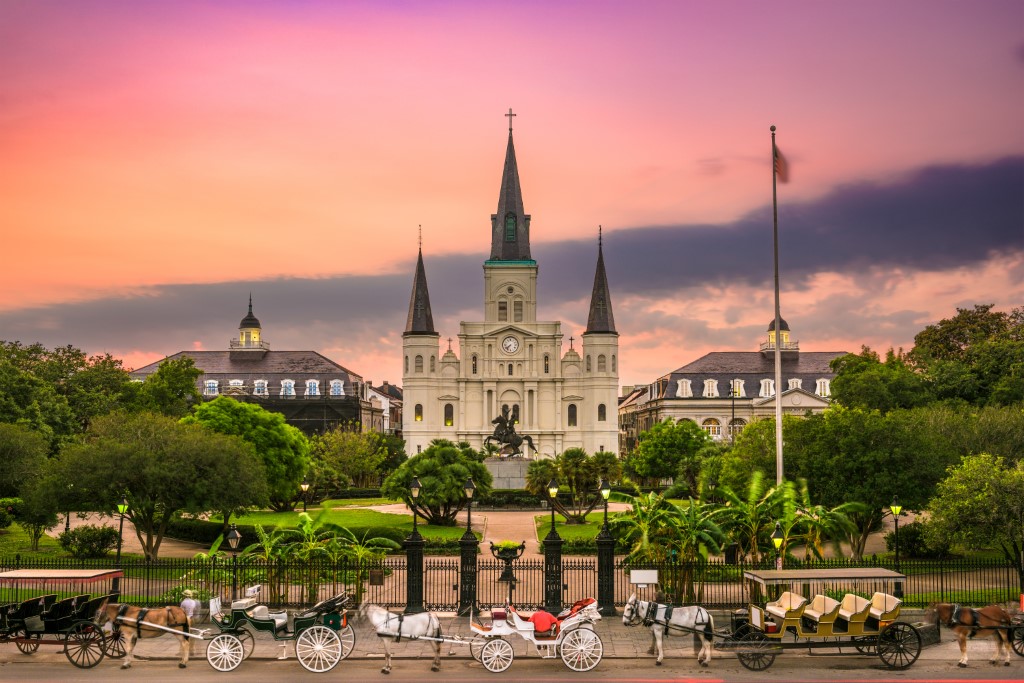 Located in the French Quarter, Jackson Square is one of the most historic parts of the city. The square was built in the eighteenth century and is named after Andrew Jackson. Today, the square is considered one of the city’s top landmarks because of its historical past.

No trip to New Orleans is complete without jazz, so why not experience it during Jazz Fest? This citywide festival is held annually, usually in the springtime. It lasts for a few days, and the schedule is filled with great musical performances. Be sure to purchase your tickets in advance!

A po’boy is a sandwich that’s popular in Louisiana. It’s filled with seafood and is usually served on French bread. The best place to try this local delicacy is at The Parkway Bakery and Tavern, which has been serving locals and tourists since 1911. 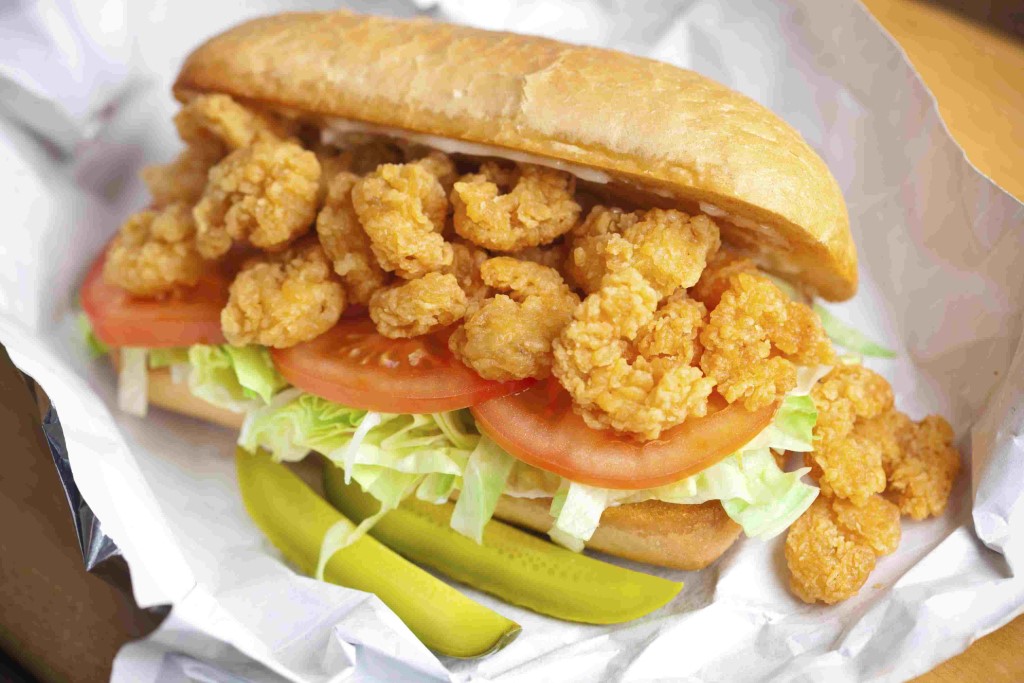 9. Peruse masterpieces at the New Orleans Museum of Art

Museums are the perfect way to learn about a place you’re visiting, and the same is true at the New Orleans Museum of Art. There are more than forty thousand pieces throughout the museum, but you could easily just spend an hour or two here.

This nineteenth-century house will genuinely make you feel like you’re stepping back in time the second you walk through the front doors. The inside has been well preserved to look just like a home at the time it was built, and there are artifacts and exhibits throughout. Don’t miss out on the great garden either!

11. Look at the houses in the Garden District

The Garden District is a neighborhood in New Orleans that is most well known for its beautiful houses and great greenery. It’s best to explore this area without much of a plan. Just peruse and see what you stumble across! There are also many cafes, shops, and galleries in this area. 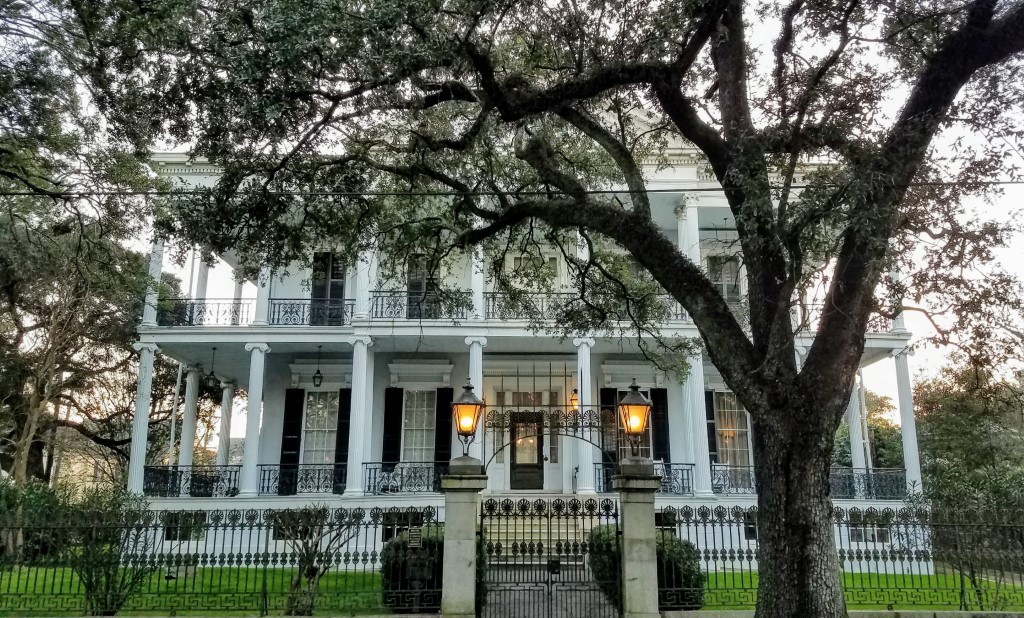 12. Catch a show at the House of Blues New Orleans

The House of Blues New Orleans is one of the best places to see a performance in the city. Not only do they have great artists come and perform, but they also serve traditional Louisiana foods like po’boys! Try to purchase tickets in advance if you know you want to see a show here.

Because of the rich history in New Orleans, why not go on a ghost tour? Many different tour operators offer ghost tours, but some of the most popular include New Orleans Ghost Adventures Tours and Nightly Spirits Ghost Tours. These typically happen in the evening, so plan accordingly.

14. Watch the sunset from Magnolia Bridge

The Magnolia Bridge is a historical bridge built in the early twentieth century. It crosses Bayou St. John and is one of the best spots to catch the sunset while in New Orleans. Try to get there early; you never know how many people might be coming to watch the sunset!

Calling all American Horror Story fans! Did you know that the house featured in season three’s Coven is actually in New Orleans? You can find the home and take a photo of it from the outside. It was built in the 1850s, so it’s truly a historic landmark in the city.

16. Cruise on the Mississippi River

What better way to spend the evening in New Orleans than by going on a cruise along the Mississippi River? Some cruises are more historical, while others are more traditional dinner cruises with music. No matter what type of cruises you like to take, there’s sure to be one in New Orleans for you. 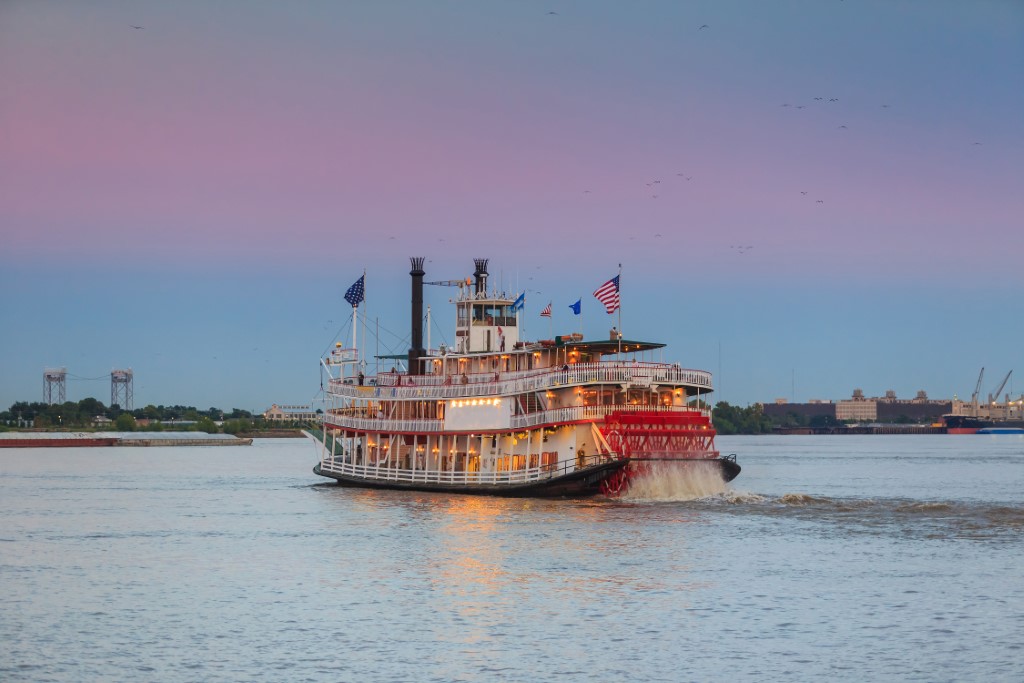 There are tons of trails within this historical park. Even though it’s located a short drive outside of the city, this is one attraction you won’t want to miss. The park is even named after a pirate and allows you to get up close and personal with the nature in this area of Louisiana.

For some great shopping, head to Royal Street. This is easily the best place for shopping on this New Orleans bucket list. It’s one of the most historic streets in the city and was one of the very first. The street is lined with tons of shops and restaurants!

19. Check out the sculptures at Louis Armstrong Park

Louis Armstrong Park is a green space in the middle of the city that covers thirty-two acres. It’s near the French Quarter and was built in the late twentieth century. However, it’s not your average park. Instead, it’s filled with tons of giant sculptures that will leave you thinking about their meaning.

Arguably the most popular place to go to listen to live music is Frenchmen Street. Even just walking along the street, you’ll be able to hear it! It’s located near the French Quarter and was one of the few areas of the city that completely survived Hurricane Katrina.

One of the top things to do on this New Orleans bucket list is to visit during Mardi Gras. The city is most well-known for this festival. It happens annually in February and is a huge city-wide party. Some people also refer to it as Fat Tuesday. 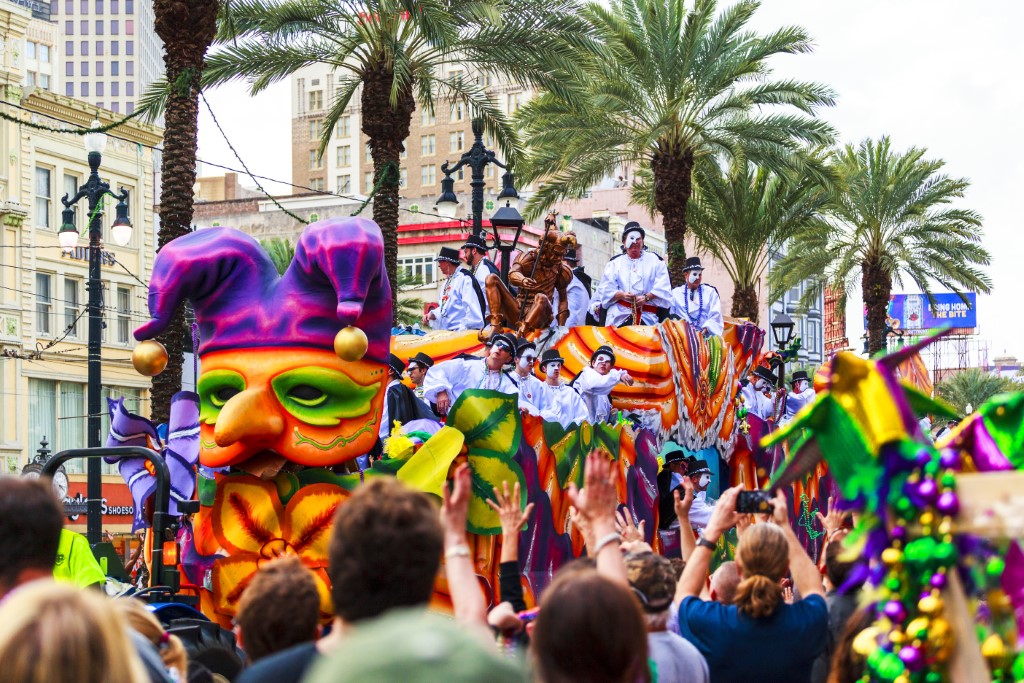 If you’re a sports fan, be sure to go to a New Orleans Saints football game. While they haven’t won an NFL championship since 2010, watching them play is still really fun. They play at the Mercedes-Benz Superdome, and you’ll want to purchase tickets ahead of time because everyone loves football in this area of the United States.

23. Watch the sunrise at Crescent Park

Crescent Park is a peaceful oasis in New Orleans. It’s located right on the river, so the views are magnificent, especially in the morning for sunrise. There’s no better place to see the sunrise in the entire city. Consider stopping by a local coffee shop for some beignets and a cup of coffee before heading to the park to catch the sunrise.

24. Have fun at the Louisiana Children’s Museum

If you’re traveling with children, one of the best things to do on this New Orleans bucket list is to go to the Louisiana Children’s Museum. The inside is filled with tons of hands-on exhibits for kids, including one all about the Mississippi River.

Head to Gabrielle if you want to try traditional cajun food! It has mid-range pricing and is run by a local family, so it’s a great way to support locals. The interior has a very classy atmosphere, but it’s a great restaurant to go to no matter what the occasion is. 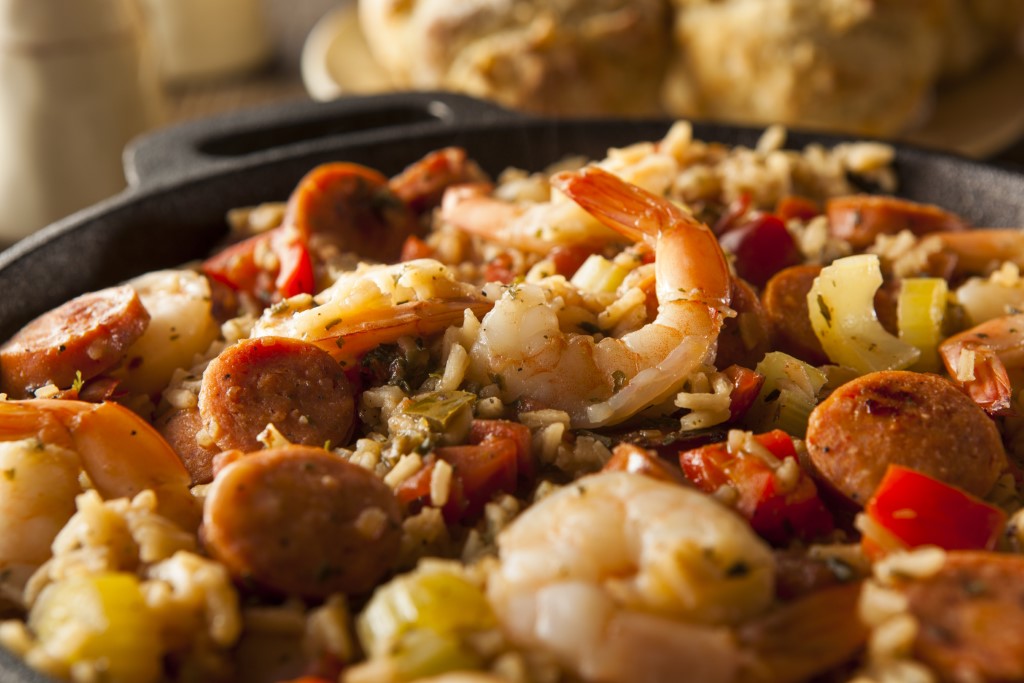 Euclid Records New Orleans is a fun record shop in the city. You absolutely can’t miss it because of the neon pink exterior that immediately catches your eye. Inside, you can shop for the latest music and even listen to live artists occasionally. Even if you don’t have a record to buy, visiting here is still a treat.

27. Get a local gift from the French Market

This marketplace is the perfect place to go for some shopping. If you’re looking for some new clothes or even a souvenir, you’ll be able to find it at this marketplace. The market is huge and goes along six different city blocks, and is incredibly historical compared to other similar markets in the country.

28. Walk around Lafayette Cemetery (both of them)

The most historic cemetery in New Orleans is the Lafayette Cemetery. There are two of them, no. 1 and no. 2, and both are worth visiting. You can find many different types of people buried there within the cemetery, including the Mayfair witches. The cemetery is pretty unique because a lot of the graves are above ground. 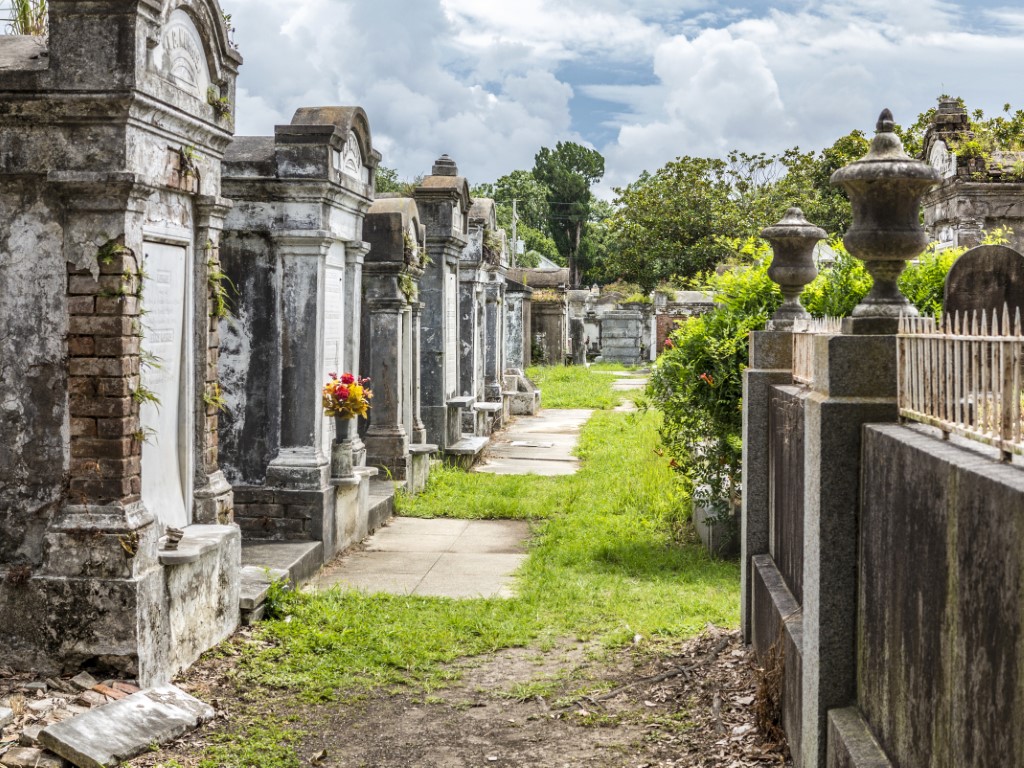 Head to Bourbon Street in the French Quarter for some of the best parties in all of New Orleans. There’s live music, clubs, and bars. It’s also great for nightlife, and the street comes alive once the sun goes down. 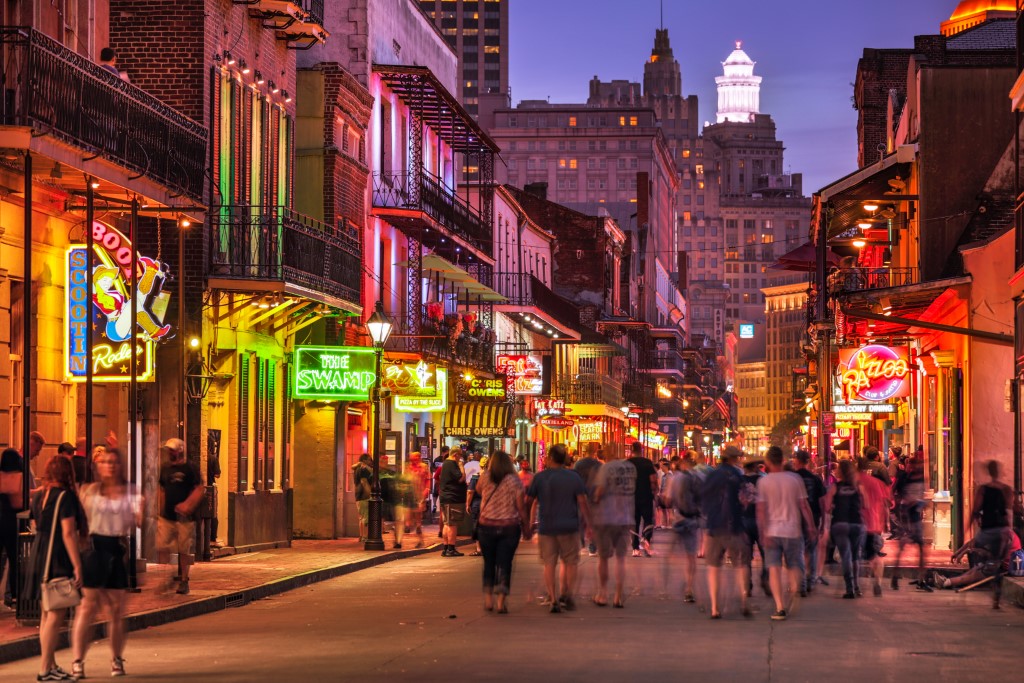 New Orleans has a history with voodoo. One of the best ways to learn about it is by going on a voodoo tour with a local tour guide! Witches Brew Tours is the most popular tour agency that offers this type of tour, but a quick online search will also bring up tons of other options for you during your trip.

31. Learn at the National WWII Museum

The National WWII Museum is one of the more unique attractions on this New Orleans bucket list. It opened in the 1990s and is dedicated to educating people on what WWII was like from the American perspective. If you’re a fan of history, visiting this museum is the perfect way to spend an afternoon.

City Park is the biggest park in the entire city and one of the most popular parks in the country. There are tons of places to explore, relax, or even have a picnic. Plus, there are walking trails so you can get some of your exercises in while traveling.

If you’re visiting New Orleans outside of Mardi Gras season, don’t worry! You can still feel like you attended Mardi Gras by heading to Mardi Gras World. This museum is filled with tons of floats that have been featured in the parades in years past.

What was once William Faulkner’s home has since turned into a bookstore called Faulkner House of Books. This quaint bookshop is a hidden gem in the city. Even if you’re not a bibliophile, you’ll surely find a great classic to take home as a souvenir.

This popular dessert is served what seems like everywhere, during the Mardi Gras season. Endless flavors to choose from! Just remember, if the baby is in your piece, you will be king for the day but also, you host the Fat Tuesday party next year. 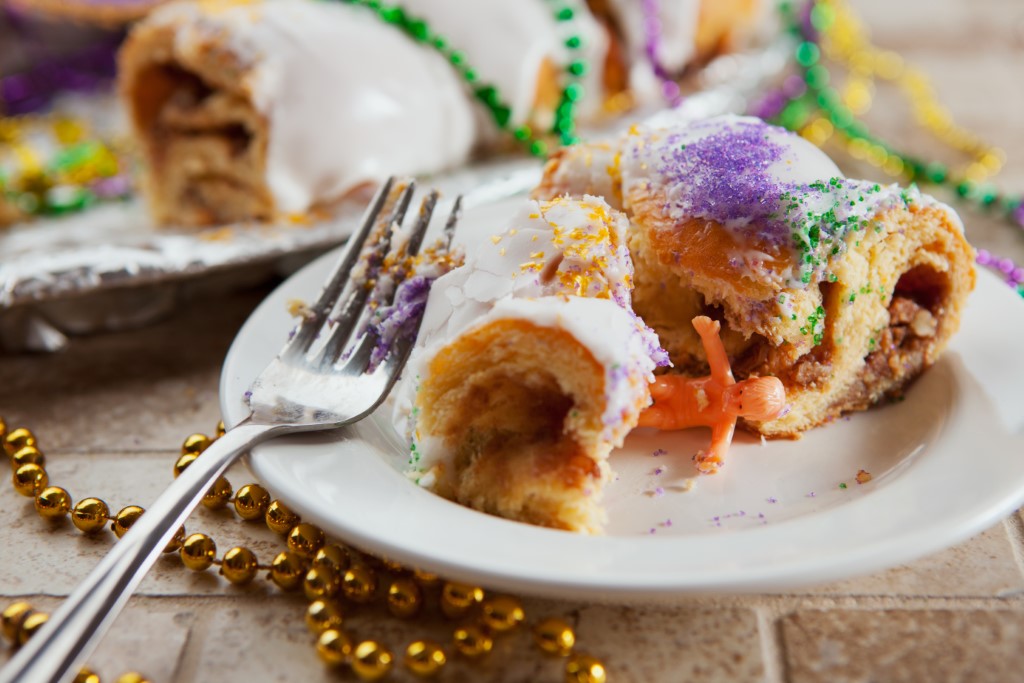 36. Eat the BEST chicken in the world

Do not miss the opportunity to eat at Willie Mae’s Scotch House. The line can get long, but so worth it!! 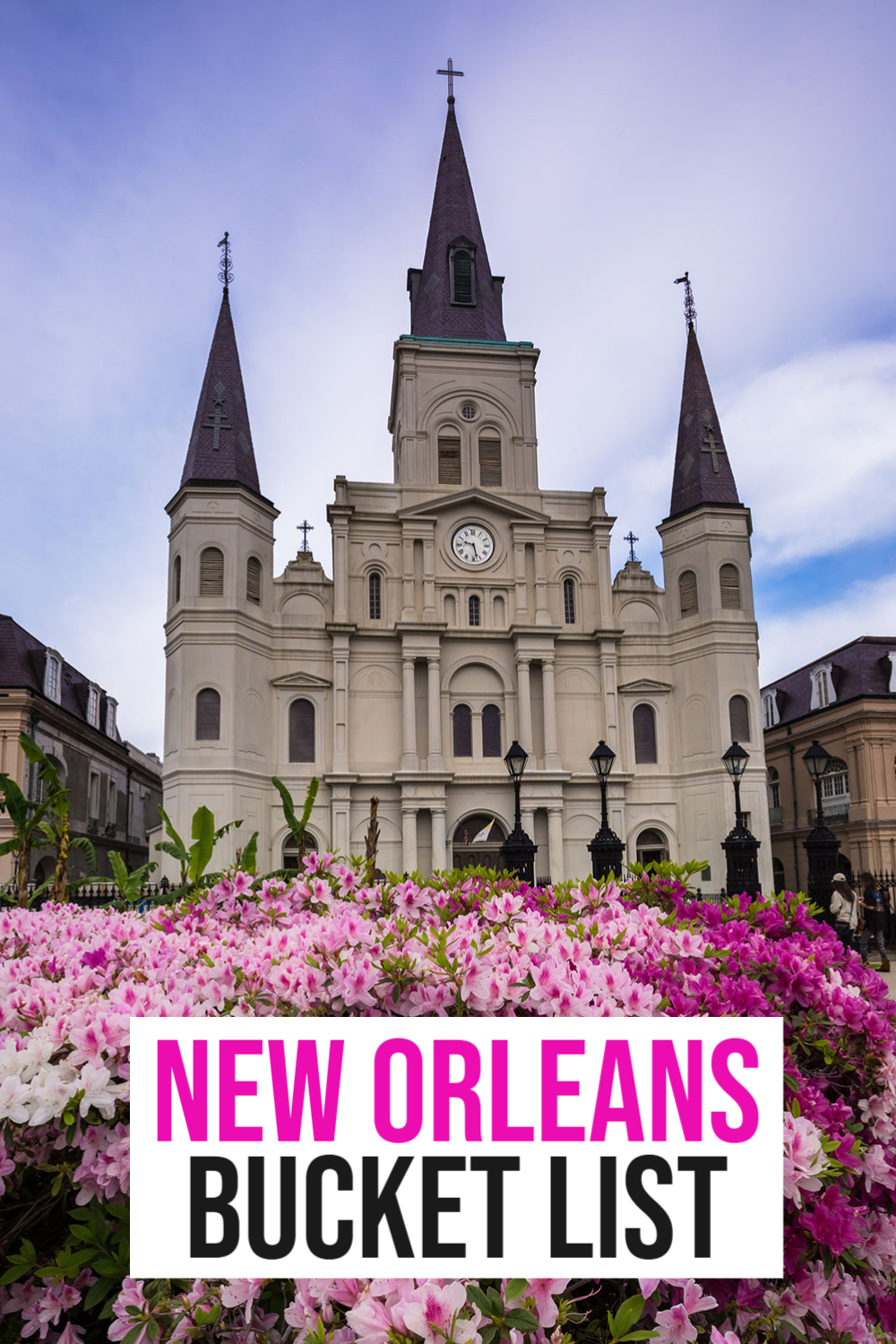