Looking for the best things to add to your Chicago bucket list? Look no further! This comprehensive list has the absolute best things to see and do on your visit to the windy city.

Chicago has long been a top USA bucket list destination for many, and for good reason. From incredible sites, thigs to do and some of the best food .. you’ll be begging to come back before you even leave. 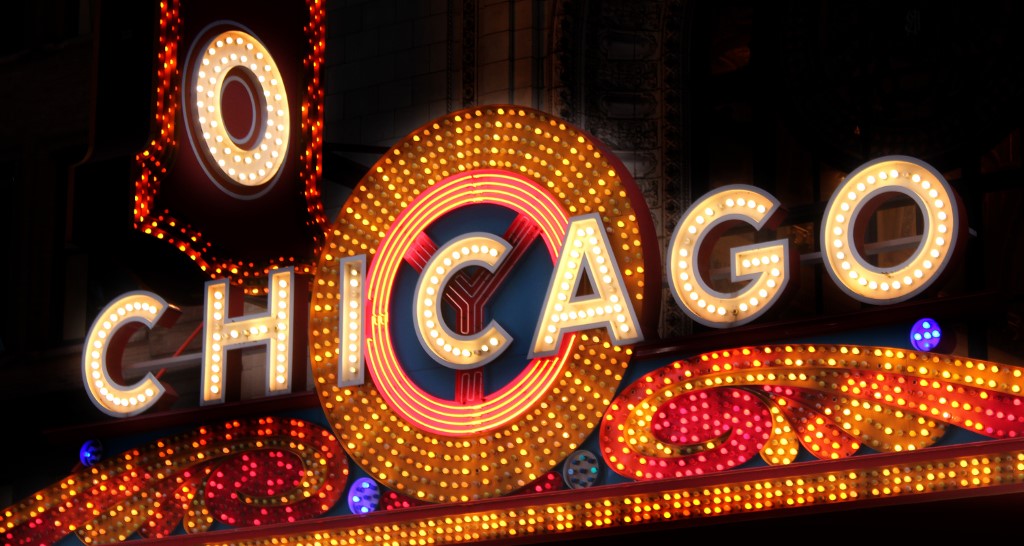 1. Snap a photo at The Bean

The Bean, also known as Cloud Gate, is one of the most iconic landmarks in all of Chicago. It’s a sculpture located in Millenium Park that was designed in 2004, and it’s shaped like – you guessed it – a bean! It has a reflection on it since it’s sort of like a mirror, making it a great photo-taking spot to remember your trip to Chicago.

Getting an iconic photo with The Bean is a top travel bucket list item for many, so don’t miss it. 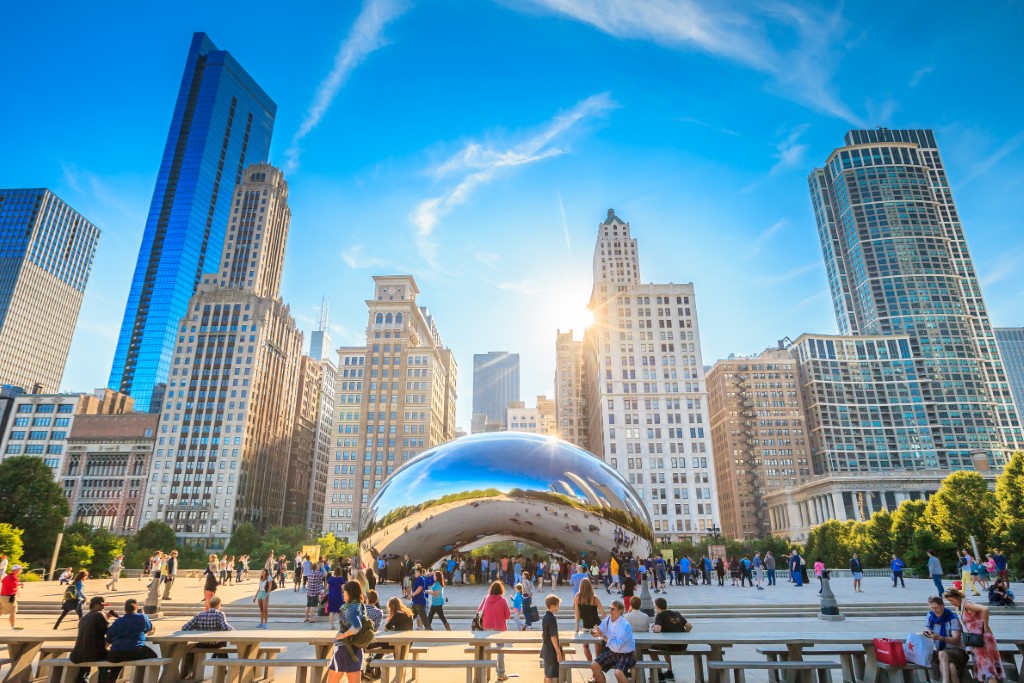 2. Stroll along the Navy Pier

This Chicago bucket list would not be complete without mentioning a stroll along the Navy Pier. This area covers 34 acres right along Lake Michigan and is filled with shops, restaurants, and even a Ferris wheel. It’s a great area to spend an evening in Chicago. 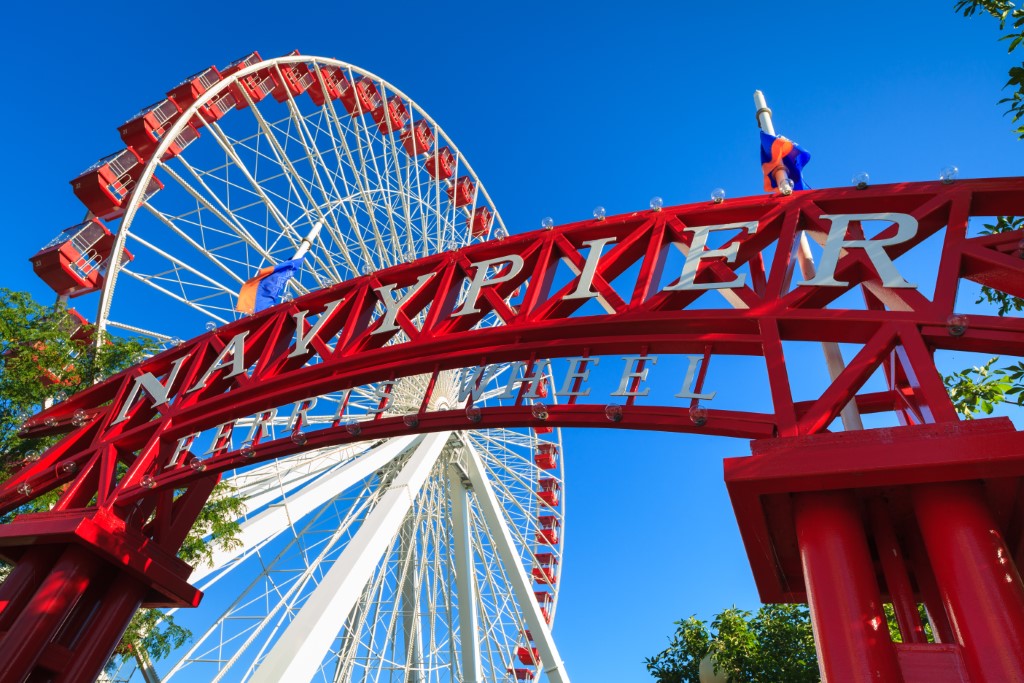 Untitled by Picasso, also known as the Chicago Picasso, is a sculpture that was created by an artist of the same name. It was made in 1967 and is now on display for all to see right next to the City of Chicago City Hall. There are usually lots of food trucks in the area too.

Believe it or not, but you can go skydiving while in the city, and it’s one of the best Chicago bucket list items that you’ll surely want to check off. Whether you’re an adventure junkie or you’re checking things off your couples bucket list, this is going to be a blast!

The Crown Fountain is a sculpture situated in Millenium Park that features a video and a fountain combined into one. It was created by an artist named Jaume Plensa in 2004 and is one of the most unique public art fixtures in the entire city that you won’t want to miss. 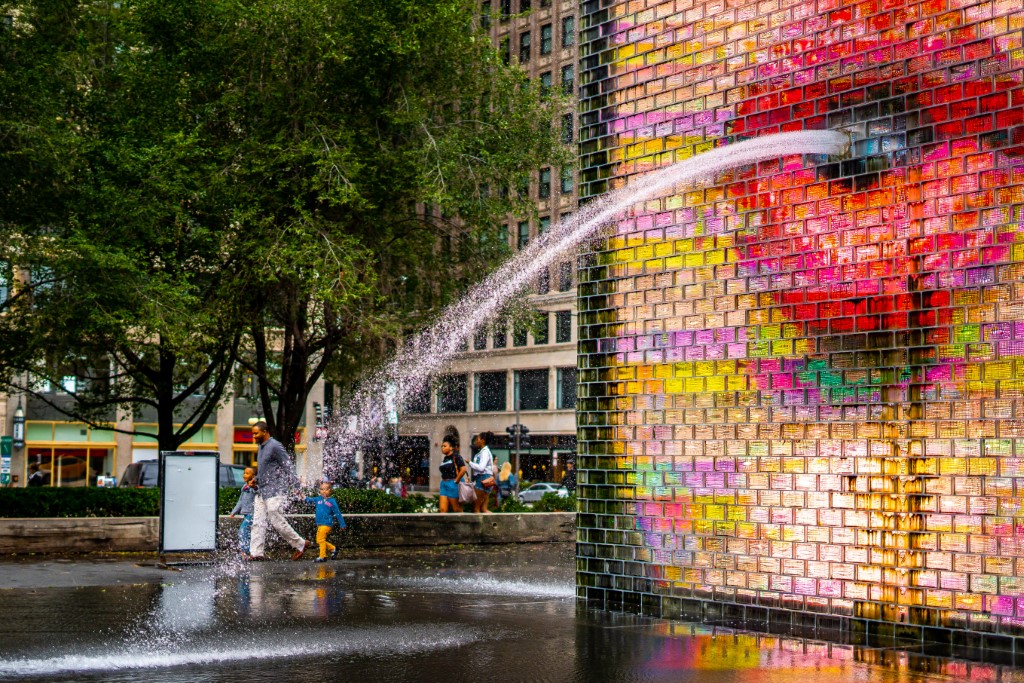 This 1500-foot skyscraper offers some of the best views of Chicago from above. The skydeck on the top floor, commonly referred to as the Ledge, will bring guests face to face with all of Chicago. If you’re not a fan of heights, this might not be the Chicago bucket list item for you! 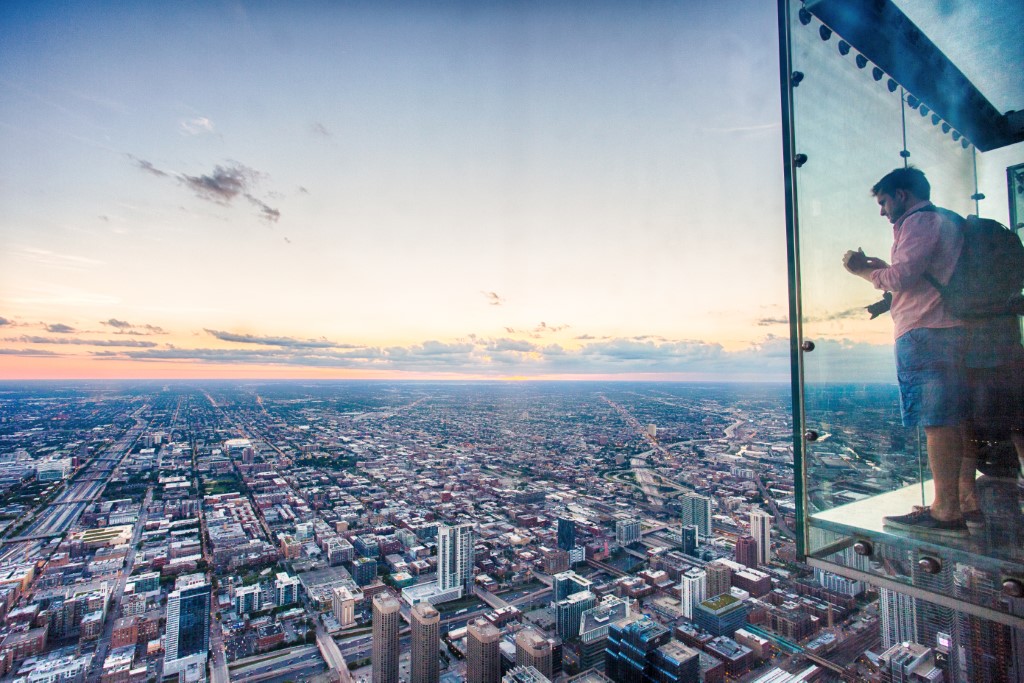 7. Go kayaking on the Chicago River

The Chicago River is breathtaking and goes right through the middle of the city. From the river, you’ll get some spectacular views. There are quite a few different kayak companies that you can rent from to explore the river, including Wateriders and Urban Kayaks.

The Chicago White Sox are the MLB team of the city. While they haven’t won a title in their division since 2008, it’s still really fun to participate in the city’s sports culture and see a game. All games are held at Guaranteed Rate Field, and tickets should be purchased online in advance. 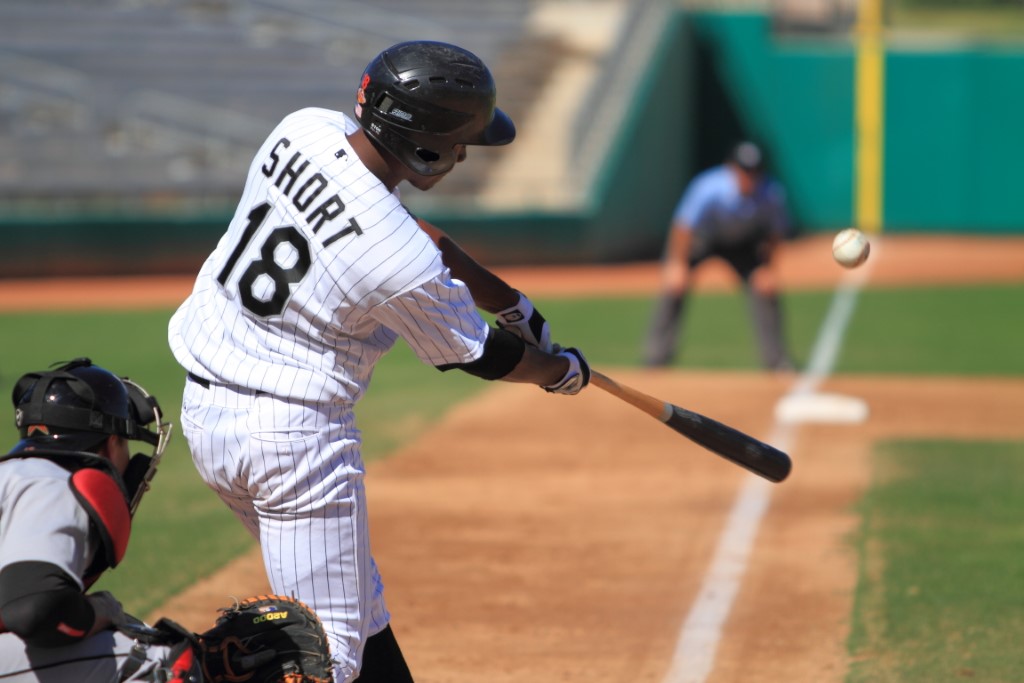 Adler Planetarium is a museum that opened in 1930 that is located on Northerly Island. It offers breathtaking views of Lake Michigan and is filled with exhibits and artifacts about astronomy. If you want to learn more about science, this is the place to go! 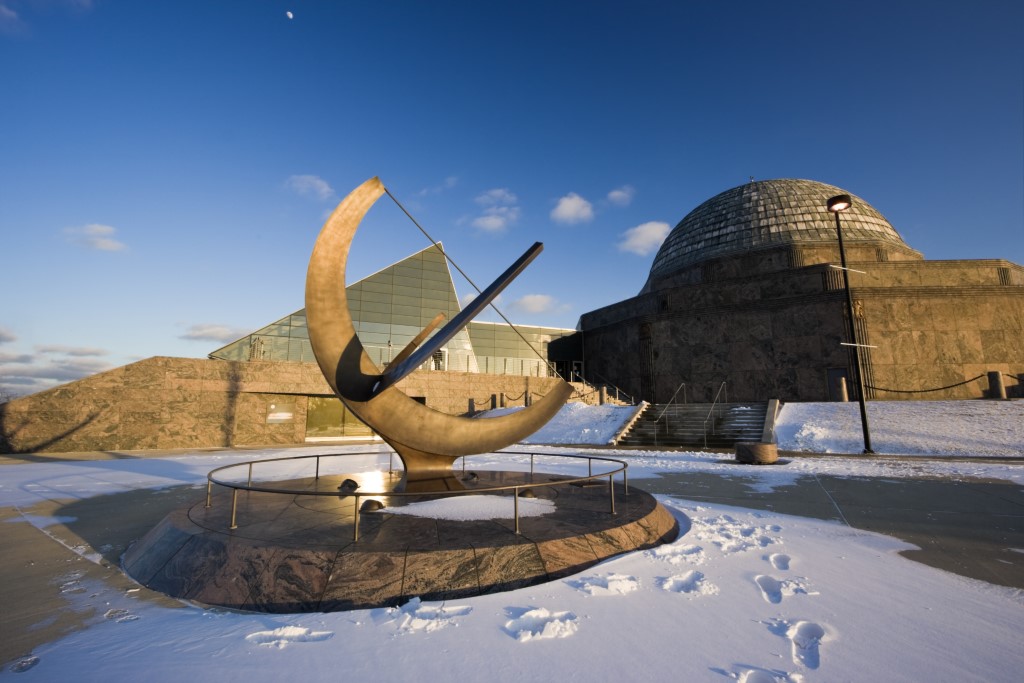 Pizano’s Pizza & Pasta is the best place to try some classic deep dish Chicago-style pizza in the city. The company is family-run and has been part of the city since 1943. They have a few different locations throughout the city, so it shouldn’t be too hard to find one! 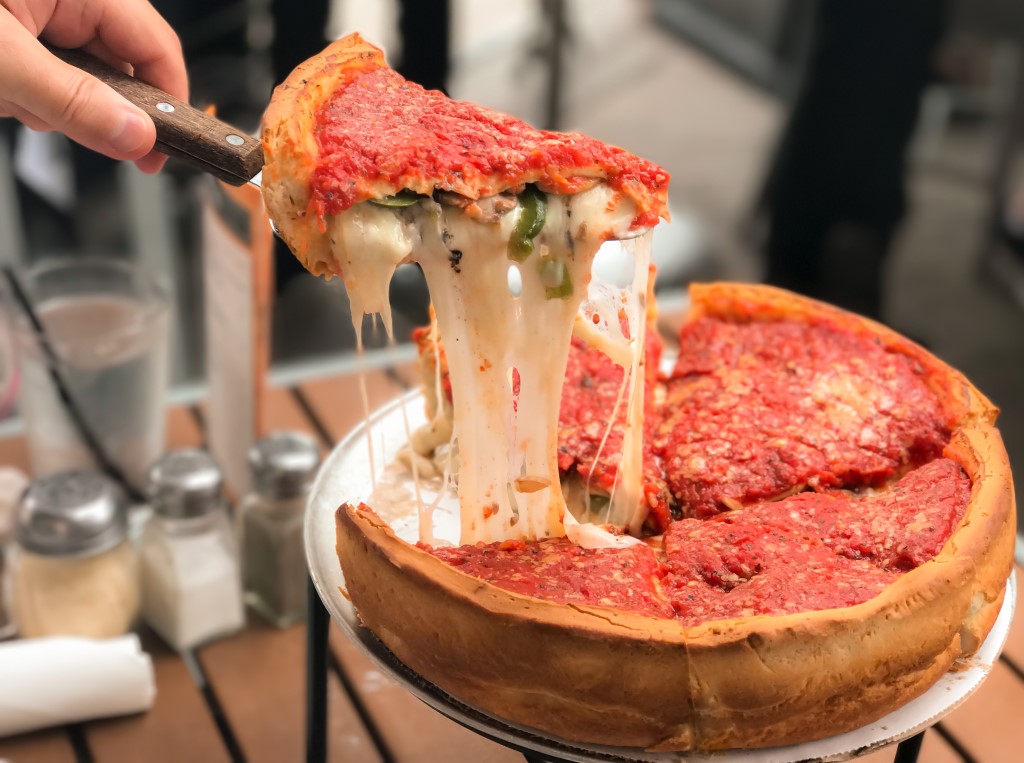 The 606 is a fun trail area and park located in Chicago. It’s part of Bloomingdale Trail and Park and is elevated. The park has lots of fun sculptures and other things to look at, so even if you aren’t in the mood for a run, this is a great place to explore.

12. Cycle along the trails by Lake Michigan

Along Lake Michigan is Lakefront Trail, which goes on for just under 19 miles. The trails are a great place to go running, walking, skateboarding, and even biking. While you probably won’t have the time to walk all of the trails, walking a part of it is a great way to spend some time while in Chicago. 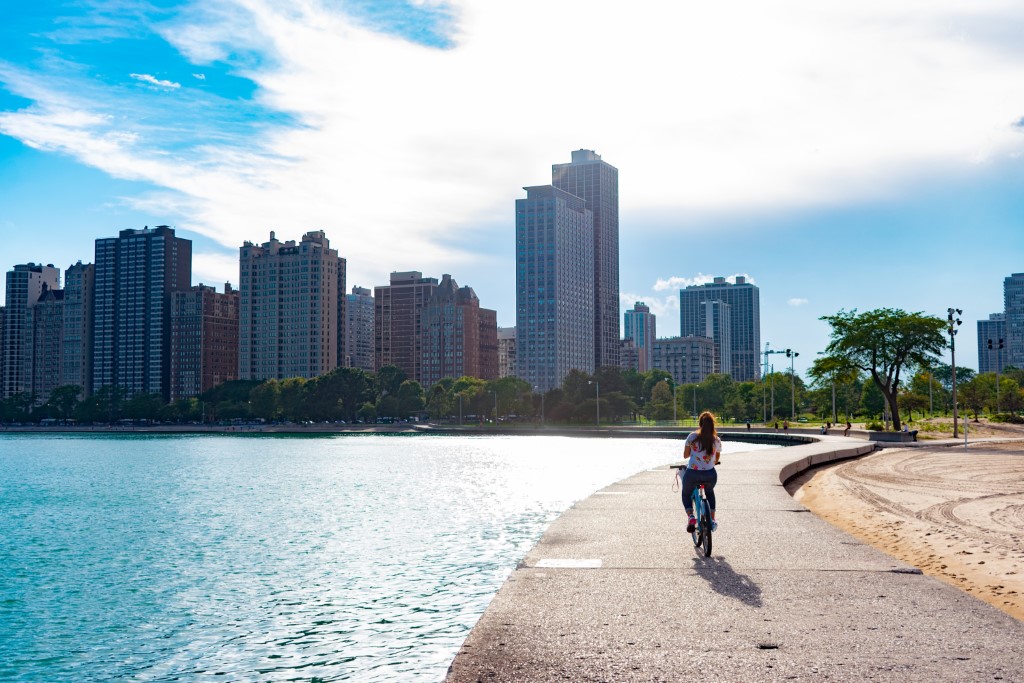 When visiting Chicago, you should absolutely visit a comedy club to see a show. While these are usually better for adult audiences, they’re tons of fun and are a great way to get out in the evening instead of heading to a bar. Zanies hosts different comedians throughout the year!

Located inside the John Hancock Building, the 360 Chicago is another observation deck located on the 94th floor. The views are different from those that you’ll get from the Willis Tower and are said to be even more beautiful at night. 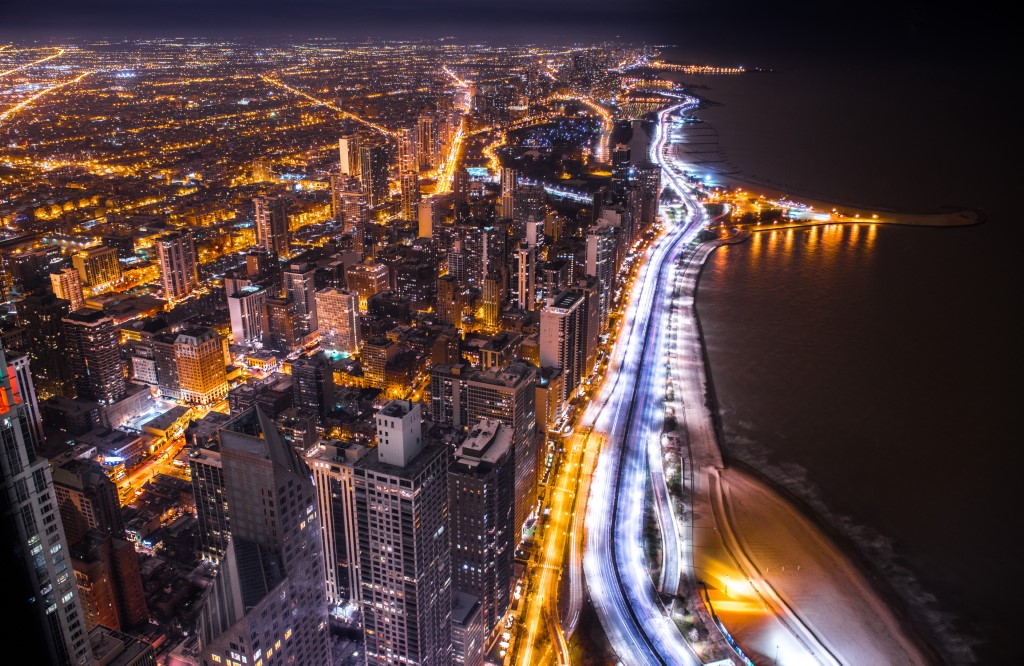 The Chicago Riverwalk is located along none other than the Chicago River. The walkway is filled with shops and views and provides a great relief from the rest of the city. It goes for just over one mile and leads to the center of Chicago’s city center. 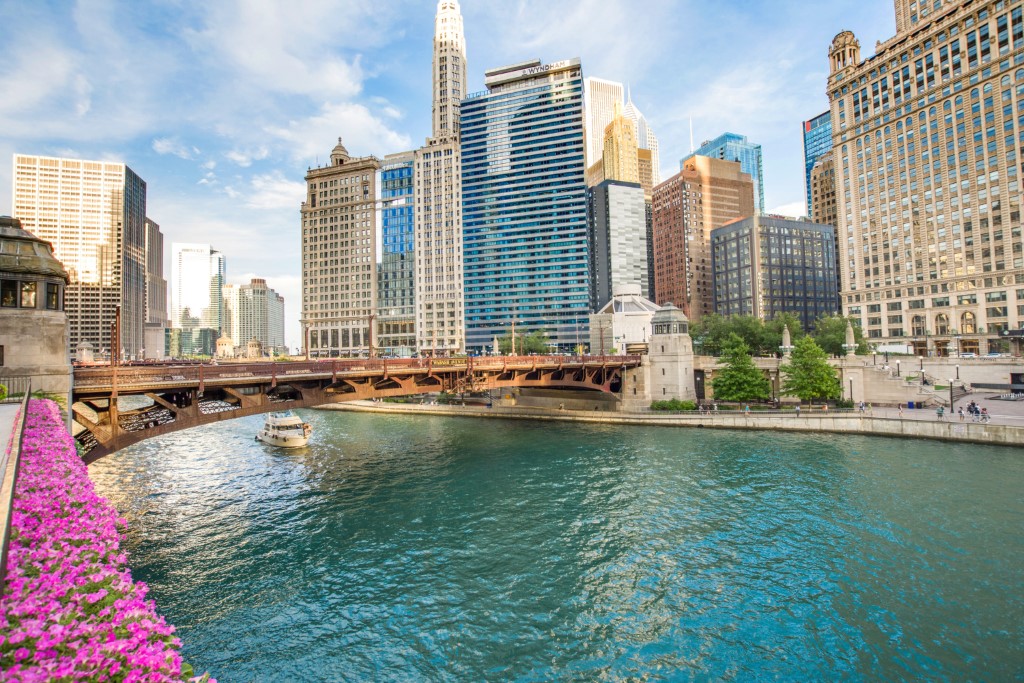 The Magnificent Mile is home to the best shopping in all of the city, which is why it deserves a spot on this Chicago bucket list. Whether you have shopping to do or not, this is a great way to spend an afternoon. Plus, the Mile is filled with impressive landmarks and attractions.

There are tons of incredible hotels in Chicago, especially along the Magnificent Mile. However, if you are looking for a unique experience and want more control over food costs, laundry, location, and a better price and privacy, getting an Airbnb is the way to go.

18. Rejuvenate at the ancient baths

The AIRE Ancient Baths in Chicago are a great place to relax and rejuvenate while visiting the city. They are actually from 1902 and are inside an old factory, so the experience is filled with history.

19. Visit the Museum of Contemporary Art

For a fun learning experience, head to the Museum of Contemporary Art in Chicago. Even those who aren’t fans of art will enjoy it. It’s located right next to Water Tower Place and is one of the largest museums of its kind in the world. 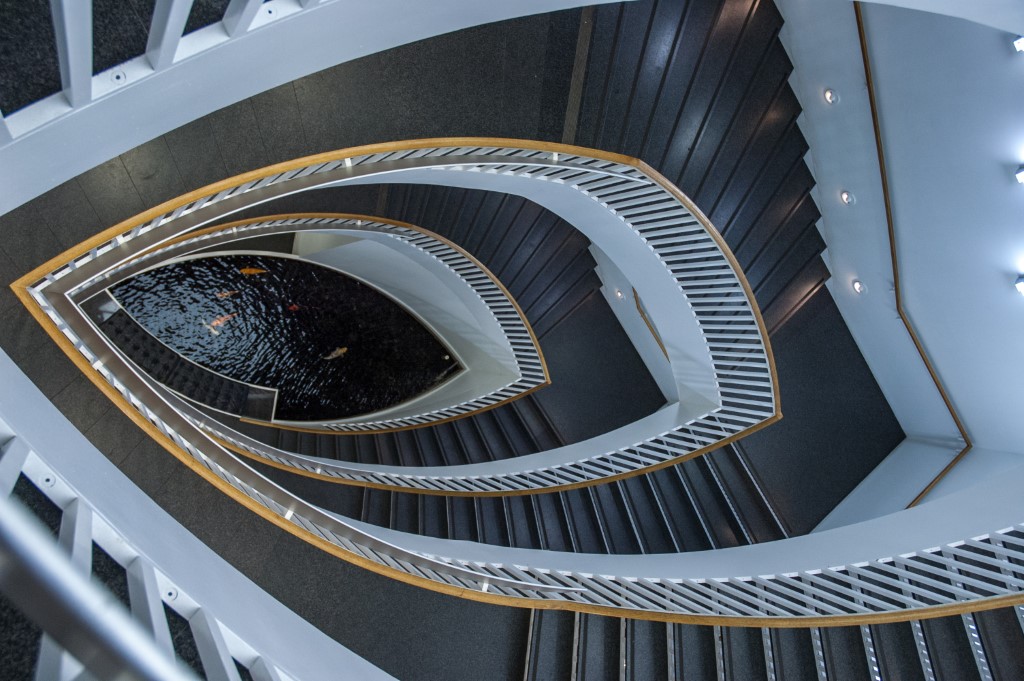 While a few of the landmarks in Millennium Park have already been mentioned on this Chicago bucket list, you’ll still want to take the time to explore the rest of the park. It’s filled with sculptures, great architecture, and places to relax and people watch.

One of the most fun ways to get around the city is to hop on the Chicago water taxi. Not many cities have water taxies, so this is truly a unique experience. While they don’t run as often as other public transportation in the city, if you have the time, hop on one! 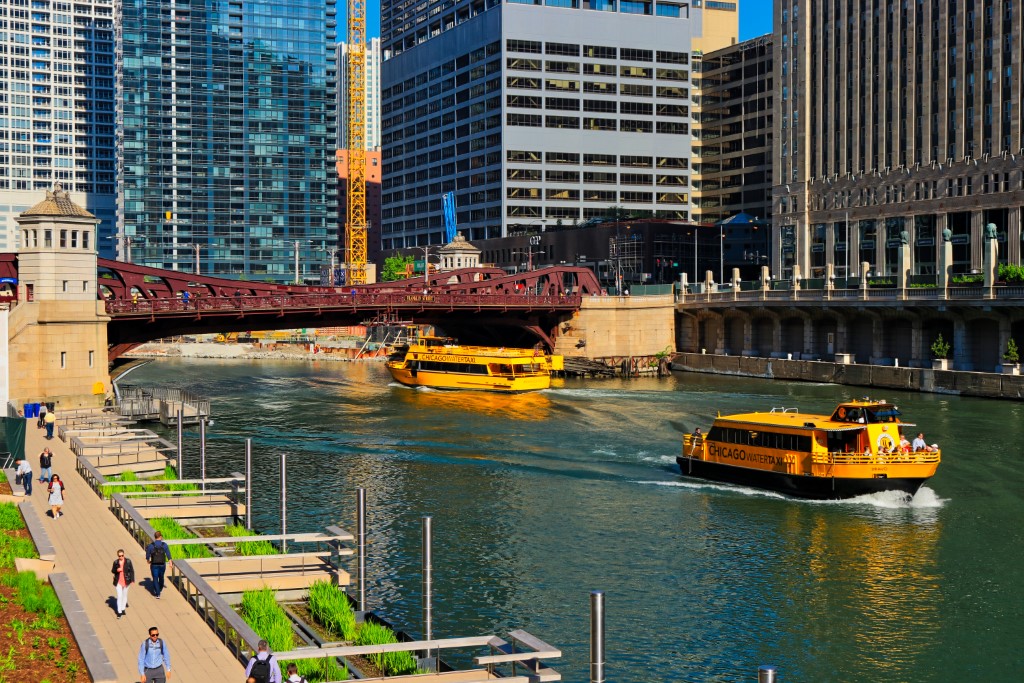 Even though it’s more popular in Europe, a great way to get introduced to a city is to go on a free walking tour. Luckily, Free Tours By Foot offers these to both locals and tourists visiting Chicago. Plus, your tour guide will most likely be a Chicago local.

23. Have a pint at Goose Island Beer Company

Chicago is known for its great breweries, so you have to try a drink at one of them when you’re visiting. The most popular is Goose Island Beer Company which opened in 1988. They have tons of different beers and even offer seasonal brews too. 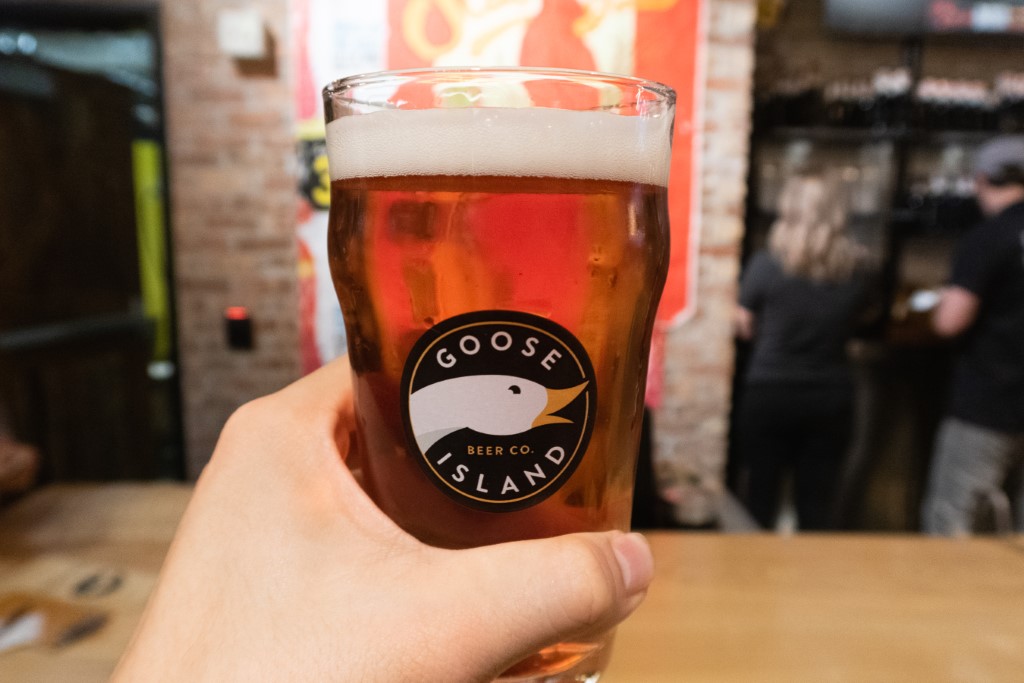 24. Learn at the Chicago History Museum

When visiting a city, it’s great to learn a little bit more about where you are. The Chicago History Museum is the perfect place to do that. It’s filled with exhibits, artifacts, and showcases covering not only Chicago’s history but also the history of the United States of America.

The Marina City towers have been featured in many different movies and television shows over the years, which has made them very popular. While they are an apartment complex, be sure to stop by and see the buildings from the outside. 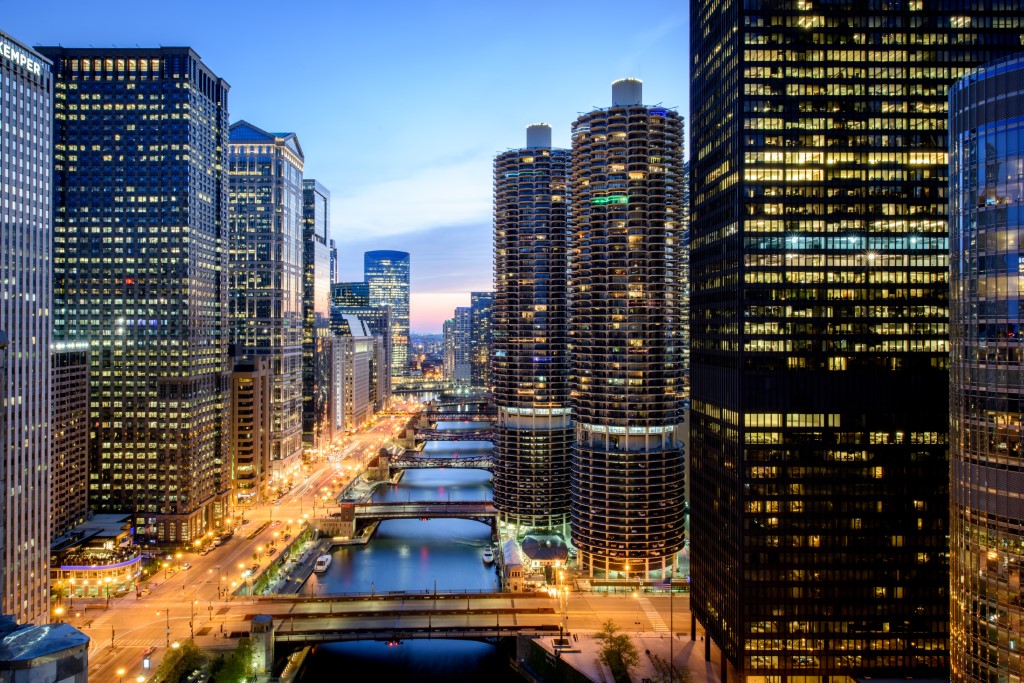 Maggie Daley Park is a beautiful public area in Chicago that covers 20 acres. It’s filled with tons of fun activities and even converts into an ice skating rink in the winter months. Visit in the summer to go on the rock climbing wall!

The Garfield Park Conservatory covers 180 acres in Chicago and is one of the biggest of its kind in the whole country. Inside, you’ll be able to see tons of flora and fauna. They also host a lot of events throughout the year, like flower shows and yoga sessions.

This Chicago bucket list wouldn’t be complete without mentioning hot dogs, which you absolutely should try while visiting. The best place to try them is Portillo’s. Be sure to order a Chicago-style dog while you’re there to try the local cuisine! 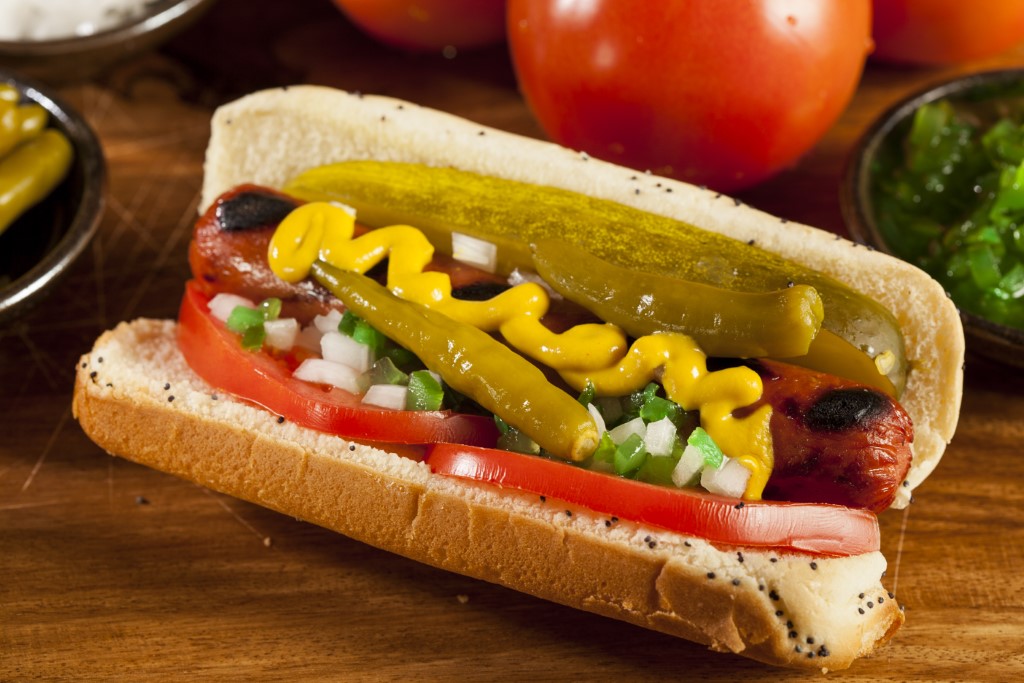 Yes, Chicago is home to the music festival Lollapalooza! It’s usually held in the summer every year in Grant Park and lasts about four days. While this is a more expensive time to visit during the year, it’s worth every penny to see some of your favorite musical artists. 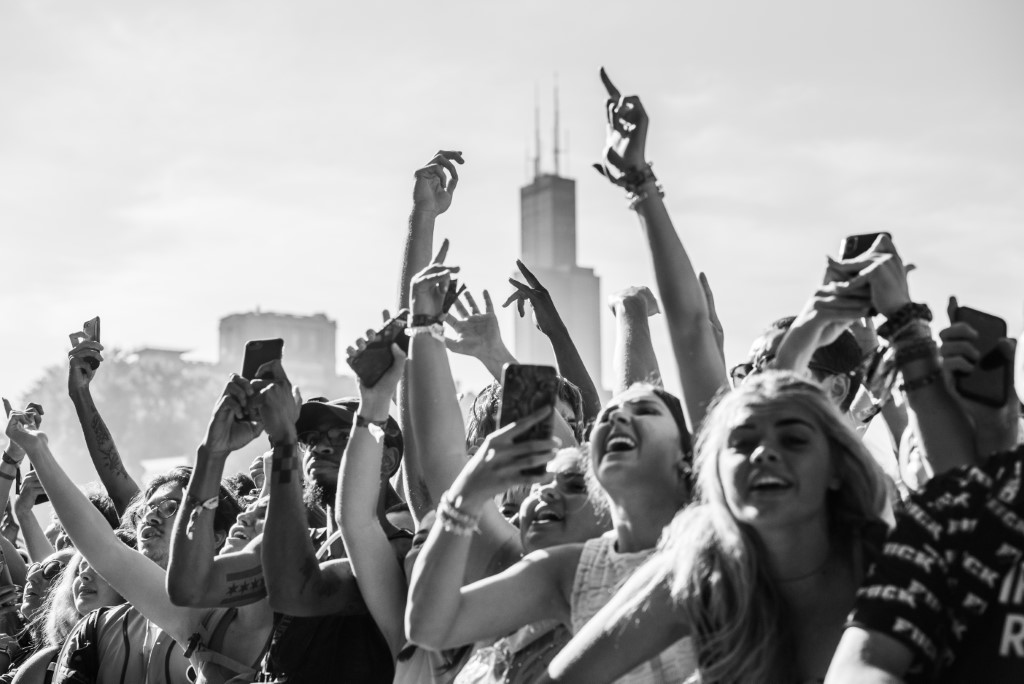 Eli’s Cheesecake is home to the best cheesecake in all of Chicago and has been since the 1980s. In addition to cheesecake, the bakery also sells a wide variety of cakes, pastries, and other snacks that you’ll surely want to try.

31. Listen to jazz at The Green Mill

Chicago is known for its jazz, so you should try to listen to it at least once when visiting the city! Head to the Green Mill one evening, grab yourself a cocktail, and get whisked away by the beautiful jazz tunes. Plus, all the performances are live!

32. Visit during Taste of Chicago

Taste of Chicago is another festival that’s held in the city every year. It usually takes place during the summer, specifically July, in Grant Park. In addition to being the biggest food festival globally, there are tons of live music events for guests to enjoy. 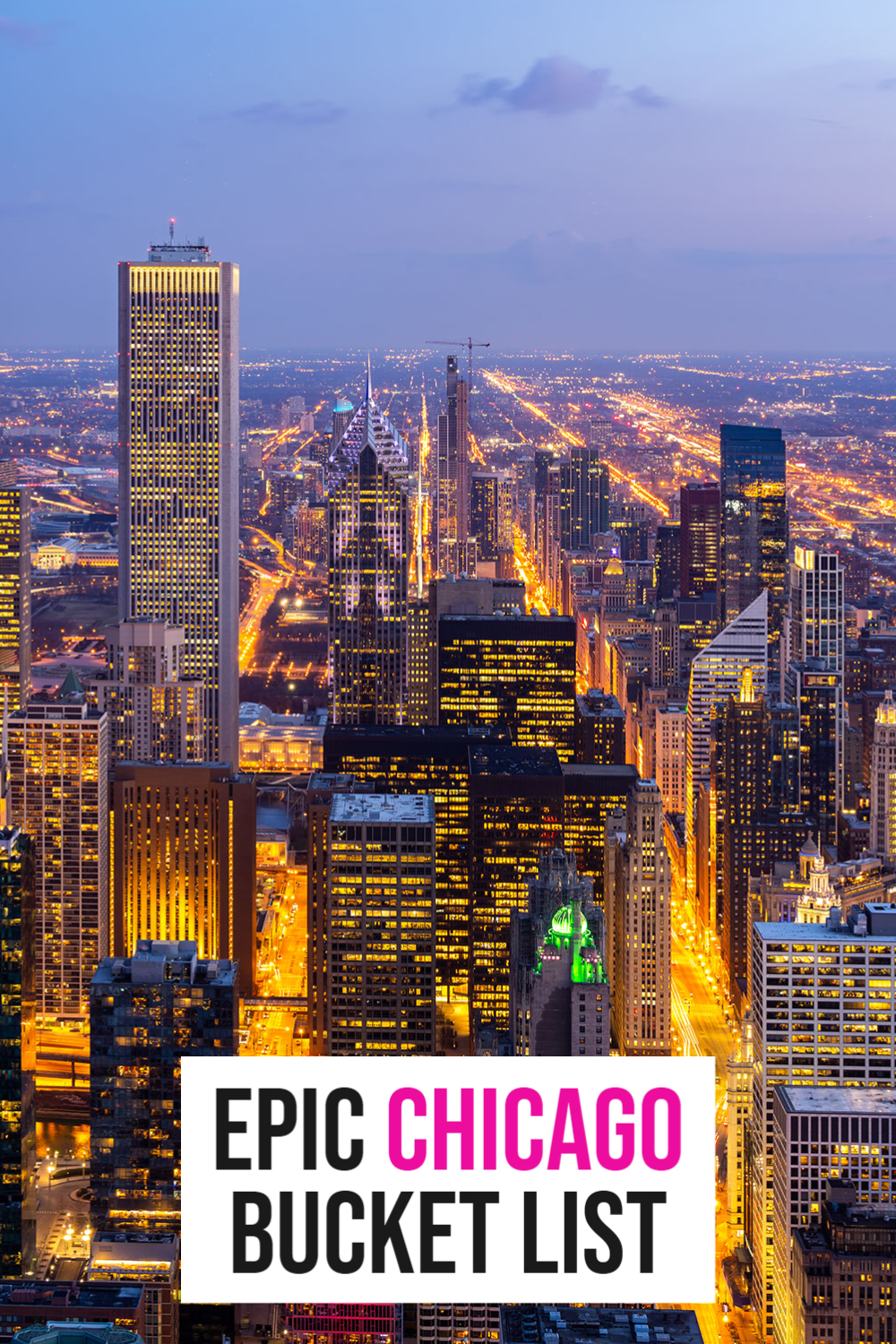