Looking for things to add to your Seattle bucket list? Look no further! We put together the quintessential best things to do in Seattle so you can plan your trip easily.

The Emerald City is bustling with activities, restaurants and things to do. Be sure and save some time to take a day trip to Mount Rainier.

For an easy way to see Seattle, consider taking a quick 3 hour city tour that stops at all major points of interest. 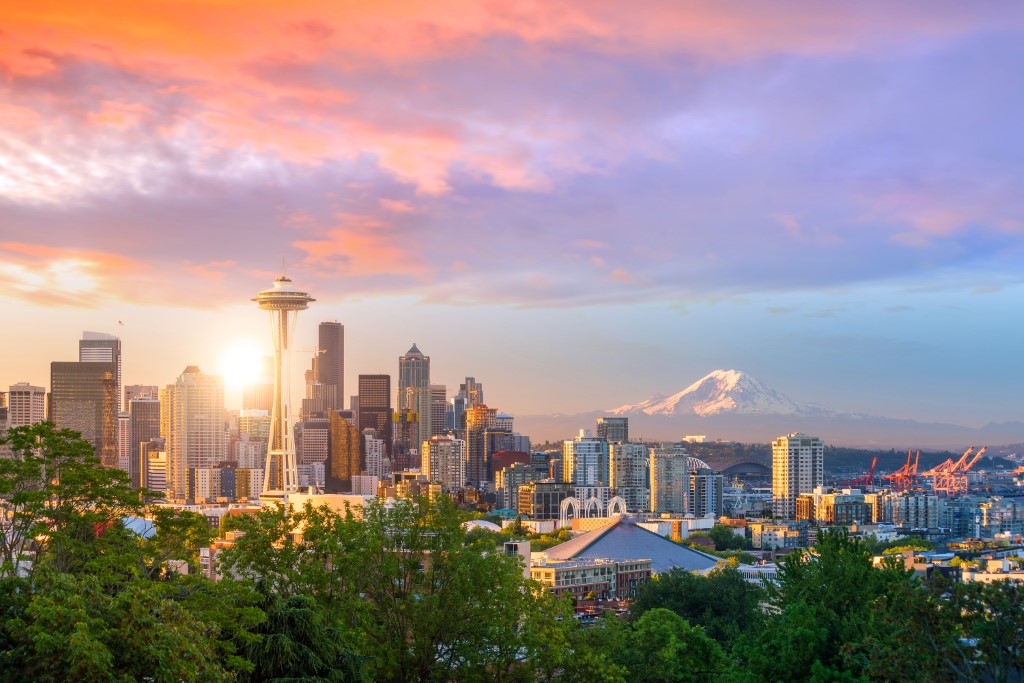 1. Buy coffee from the first Starbucks

One landmark that must be on your Seattle bucket list if you’re a coffee lover is getting a cup of your favorite coffee from the original Starbucks. It opened in 1971 and has been a staple in the city ever since, for both tourists and locals. The sign even still has the old logo! 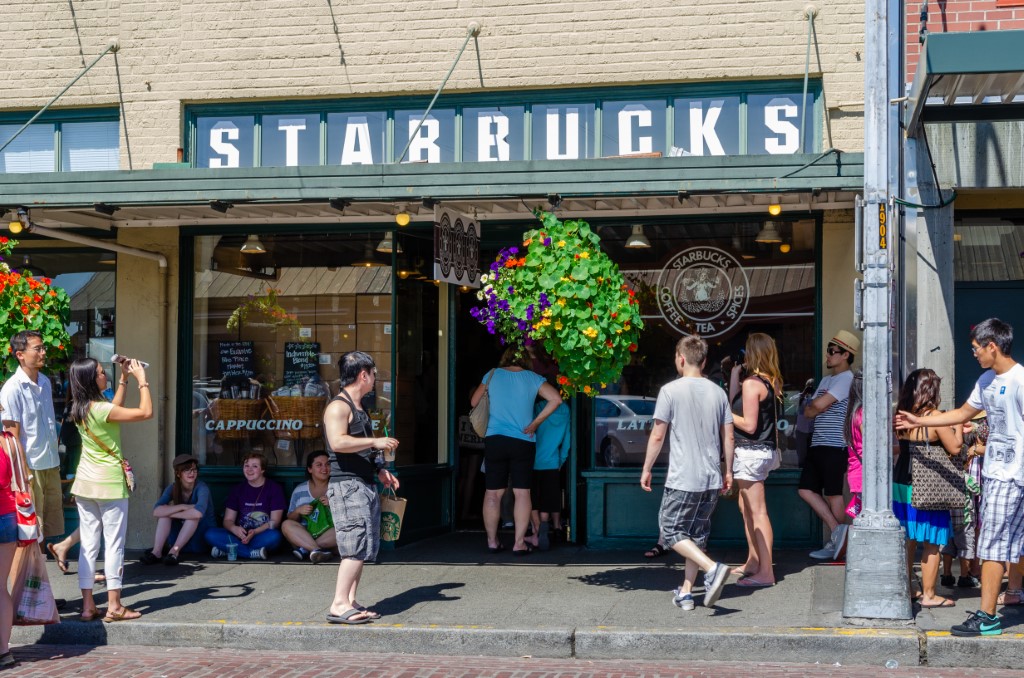 Under the Aurora Bridge, you can find the Fremont Troll! It was famously featured in the movies 10 Things I Hate About You and Sleepless in Seattle. While it may seem like an attraction for children, there’s nothing more fun than seeing a massive troll that’s five times the size of you.

Seattle is one of the cities in the United States that has its own ferry, and the views from it are breathtaking. Hop on the Seattle – Bainbridge Ferry and take in the views, even if all you do after is ride it right back to the city.

4. Take a photo at the Gum Wall

While it may sound disgusting, Seattle is home to an iconic gum wall. This wall first started attracting gum in the ‘90s, and ever since, anyone who visits the wall sticks their gum on it too. A few years ago, the city thoroughly cleaned the wall off, but citizens immediately started putting gum back on it again. 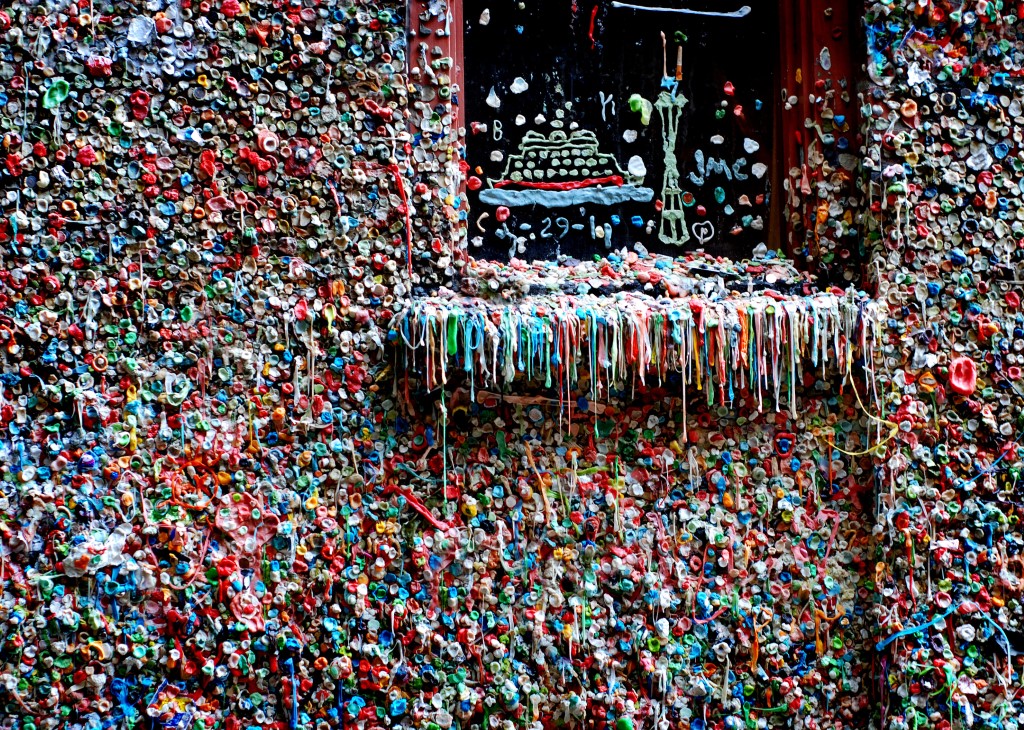 5. Walk along the waterfront

The Seattle waterfront is breathtaking, and there are a few walking paths near the water that you can stroll along to take in some of the great waterfront views. There are also many great attractions in this area, so be sure to take the time to explore while exploring the waterfront.

One of the best museums to visit in Seattle is the Seattle Art Museum! It opened in the early twentieth century and is located near the Gum Wall. Inside, there are thousands of great exhibits, art pieces, and sculptures. People have come from all over the Pacific Northwest since it first opened.

The Space Needle is essential on any Seattle bucket list! It stands at just over six hundred feet tall and has an epic observation deck on the top, as well as a restaurant.

It’s one of the most iconic structures in the city, a top USA bucket list destination and is featured in many movies and TV shows, including Grey’s Anatomy. 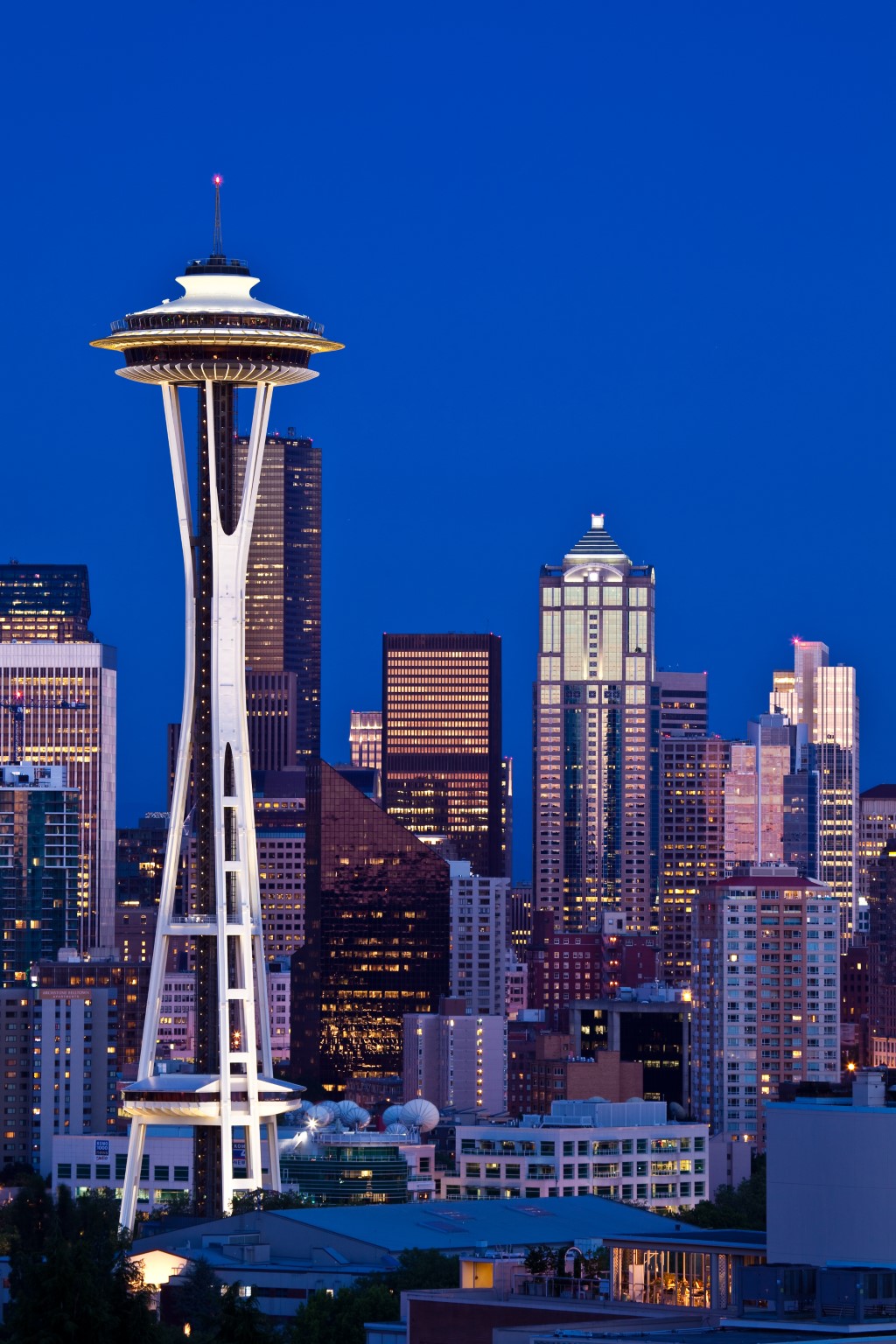 The Seattle Monorail first opened in the 1960s, and anyone who visits the city can still use it today! It’s relatively affordable to ride and will truly bring you back in time. It connects Seattle Center to Westlake Center Mall. Those are the only stops, which makes it pretty hard to get off at the wrong stop.

9. See the skyline from Kerry Park

Kerry Park is known for its incredible views in the city, specifically for the fantastic skyline of Seattle. This is the perfect place to go if you want to catch the sunrise or the sunset. You can walk up to the park because it’s elevated, or you can drive your car up, whichever works for you.

10. Learn at the Museum of Flight

The Museum of Flight is one of the more interesting museums to visit in Seattle. It opened in the 1960s and is one of the biggest museums of its kind in the country. At the museum, you can learn a lot about air and space!

11. Eat all the food at Pike Place Market

Pike Place Market is a staple on any Seattle Bucket List and is also one of the most visited attractions in the city. It was built in the early twentieth century and is essentially a huge fish market and food hall. There are so many local vendors inside! Be sure to stop by the fish stall to see the fishmongers.

For an even better experience, take a food tour of the market with a chef. 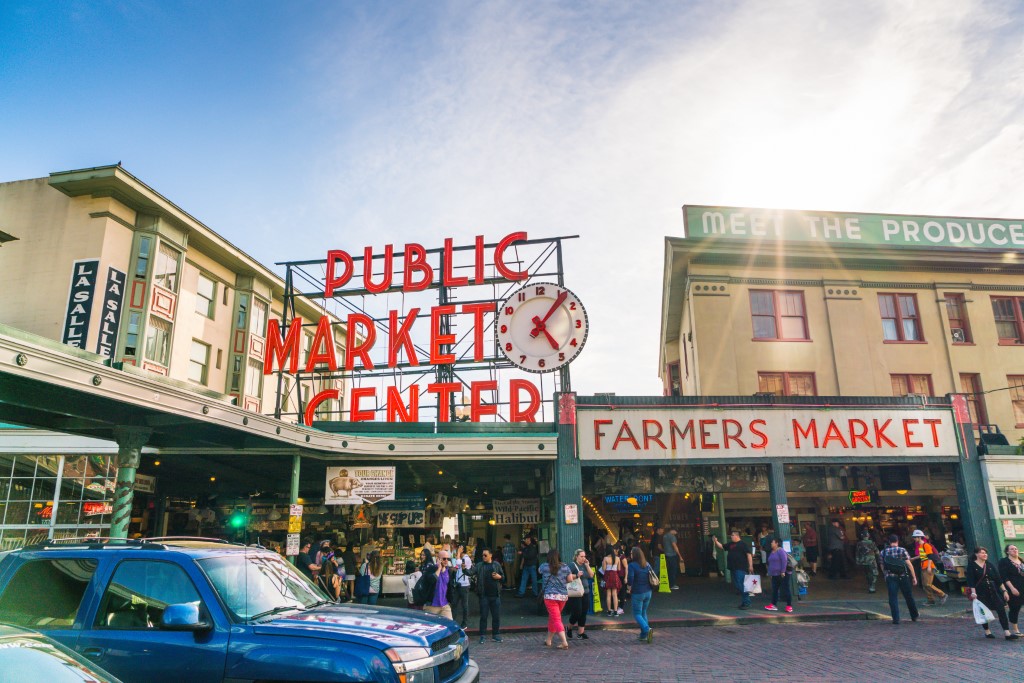 12. See the glass sculptures in Chihuly Garden and Glass

This fantastic attraction is inside the Seattle Center. It features a whole bunch of glass sculptures that were created by Dale Chihuly. The art pieces are truly mesmerizing and incredibly unique, especially once the sun starts to go down. 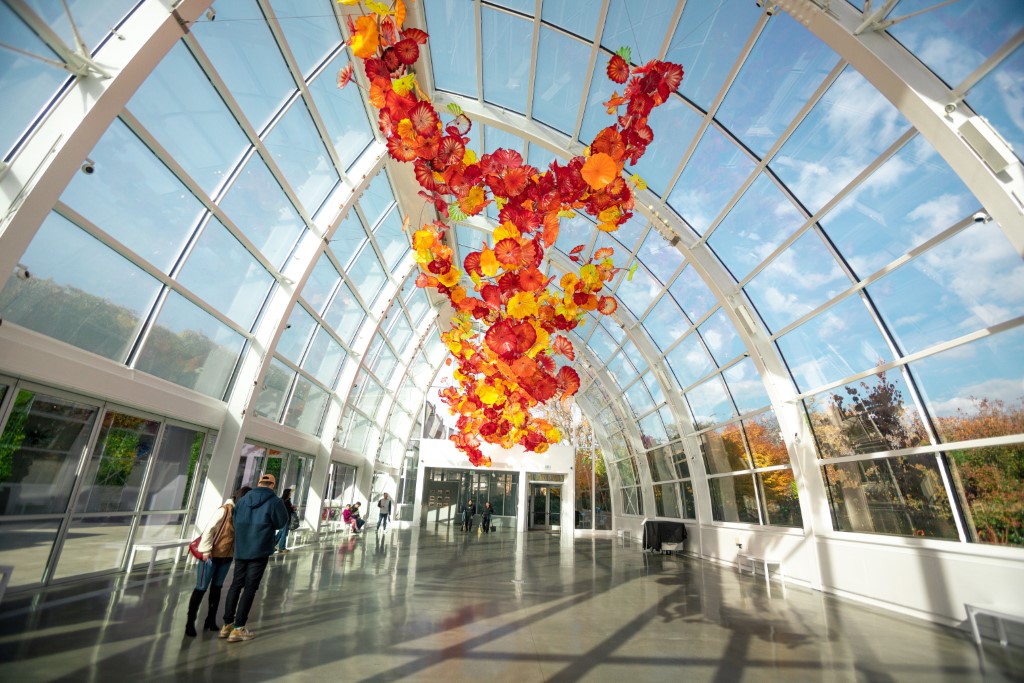 An enjoyable museum in Seattle is the Seattle Pinball Museum! It’s essentially a huge collection of pinball machines. It’s a bit more of an interactive museum; all you have to do is pay the entrance price, and then you can use any of the machines at your leisure until you leave. This is tons of fun for all ages!

Alki Beach has an immense historical significance to the city since it’s the landing site of some settlers to Seattle. Now, it’s a great place to visit to relax and step your toes into the water. Luckily, the beach never gets super busy, so you won’t have to worry about getting there early for a spot.

Bumbershoot is Seattle’s annual music festival! It’s super fun for all ages and has tons of outdoor and indoor performances from artists. Over the past few years, popular artists like The Chainsmokers, Portugal. The Man, AJR, Lorde, and even Lizzo have performed there. It usually happens on Labor Day Weekend, and you want to buy tickets well in advance.

Smith Tower is a massive skyscraper in Seattle known for its incredible views at the observation deck. It was built in the early twentieth century and was one of the most prominent skyscrapers of its kind back when it was first made. Visiting in the evening is even more magical.

To get some fresh air during your trip, head to Olympic Sculpture Park. It’s filled with lots of outdoor sculptures and tons of green space, as well as walking paths, so you can take a pleasant stroll to enjoy the weather and the skyline views. 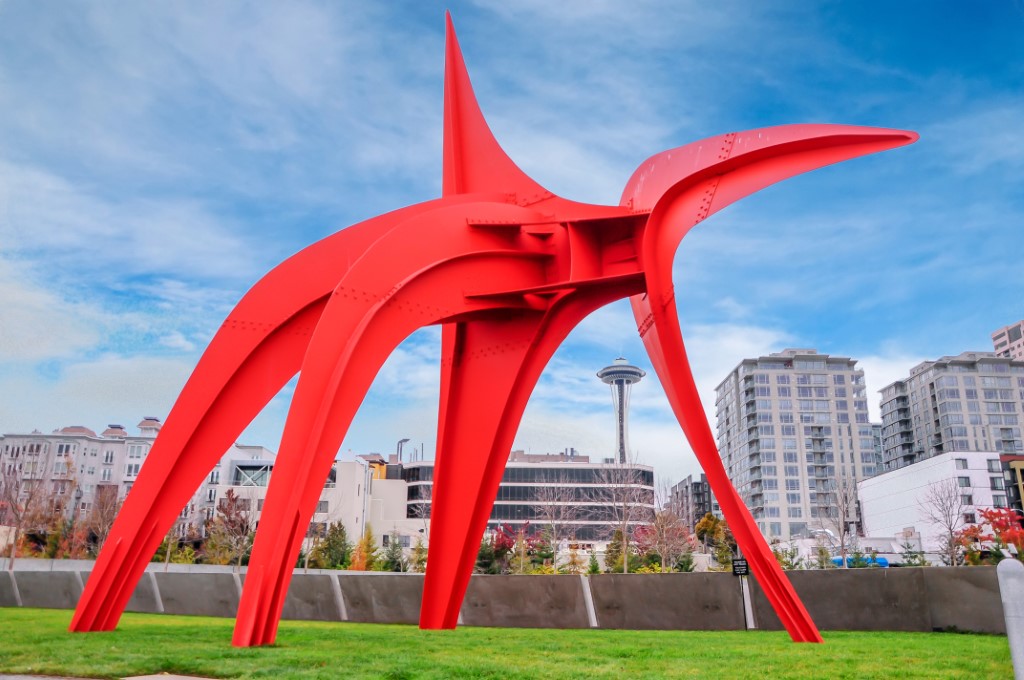 The Seattle Great Wheel is the giant Ferris wheel near the waterfront in the city. It’s been opened in 2012 and offers excellent views of the water and the city skyline. You do have to pay to ride the Ferris wheel, but it’s entirely worth it. 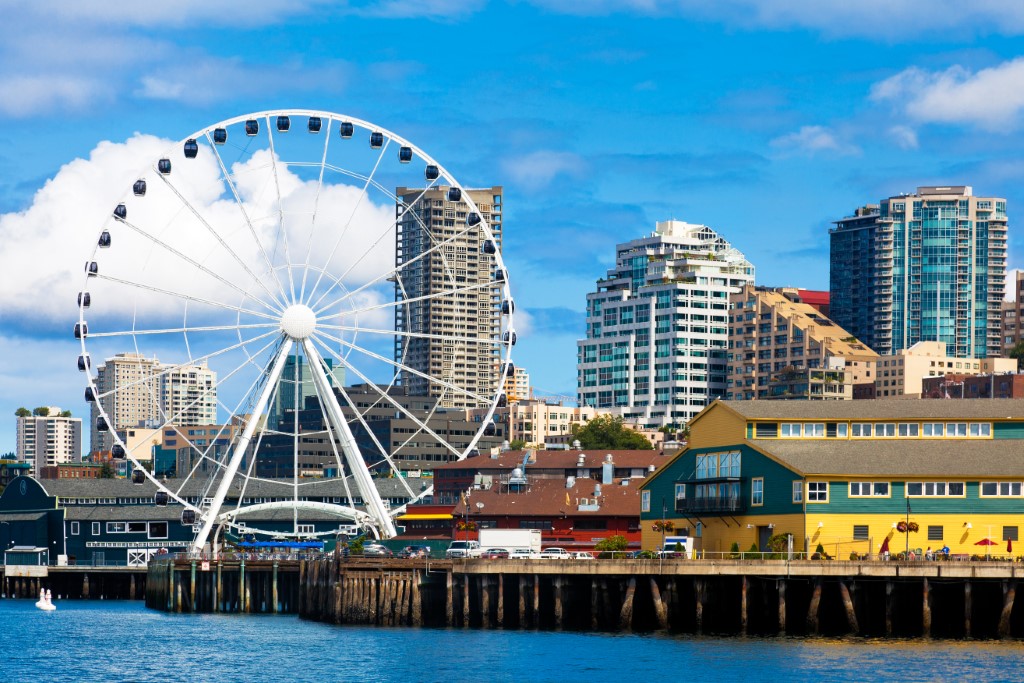 Gas Works Park is a must-visit on a Seattle bucket list! It used to be an old company plant, and what’s left has since turned into a park. The original structure was built in the early twentieth century, and there’s lots of green space in the area to relax.

20. Visit the Museum of Pop Culture

If you love entertainment, you’ll want to check out the Museum of Pop Culture. It opened in 2000 and is filled with many exhibits all about pop culture. The museum itself is architecturally beautiful and unique from the outside!

21. Go to the top of Columbia Center

At the top of Columbia Center, there’s the Sky View Observatory which is known for providing some of the best views of Seattle. It’s on the seventy-third floor, and there’s even a cafe so you can sit and relax while soaking up the scenery.

Seattle is known for its seafood, so take the time to try some local oysters! The best place to try them is at Elliott’s Oyster House in downtown Seattle. They’re a bit pricy, but it’s worth it to be able to try a local delicacy. 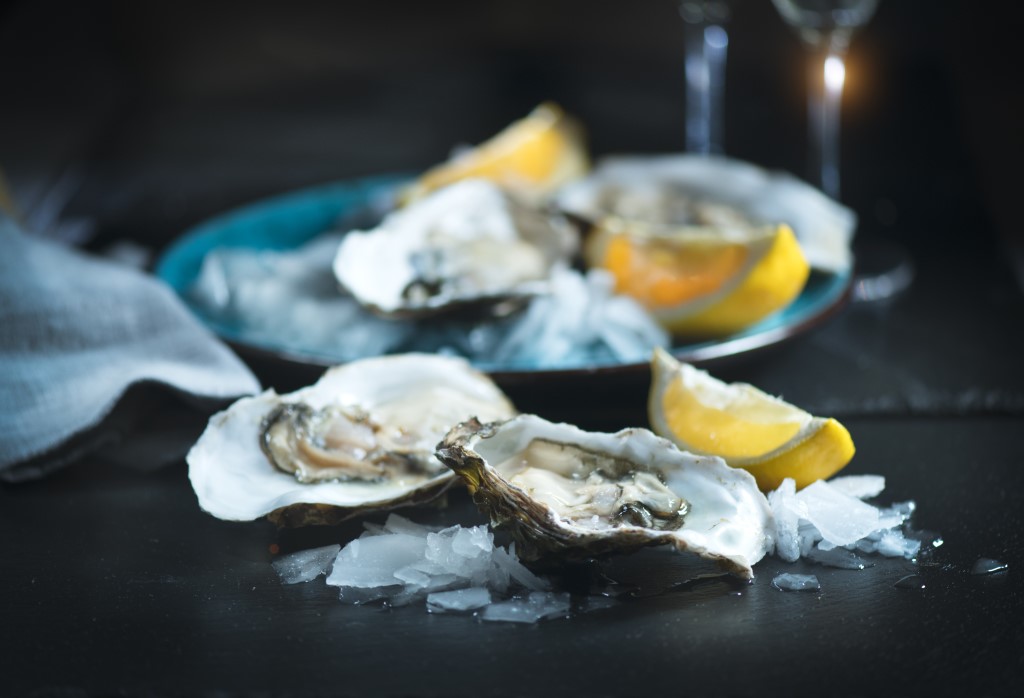 Seattle Center Library is accessible to the public and is beautiful, so why not visit? The building is incredibly unique, with tons of glass, allowing lots of natural lighting inside the library. If it rains when you visit the city, this is a great indoor attraction to keep you busy.

This museum is a unique museum dedicated to technology! Throughout the museum, you’ll be able to explore a lot of older computers and learn more about what technology is doing to society.

If it’s baseball season when you visit Seattle, be sure to see a Mariners game! They’re the MLB team in the city, and they play at T-Mobile Park. Be sure to purchase tickets online, and then you’ll be able to enjoy the city’s sports culture.

26. Try a special coffee at the Starbucks Reserve Roastery

Because Seattle is the birthplace of Starbucks, the city is also home to a Starbucks Reserve Roastery. This coffee shop serves unique flavors that you can’t get at any other Starbucks, making for an unforgettable experience. The inside also is very luxurious!

A great way to get acquainted with the city is to go on a harbor cruise tour. Many companies do this tour, so you can easily find one within your budget. This is also a great Seattle bucket list item, no matter the weather. 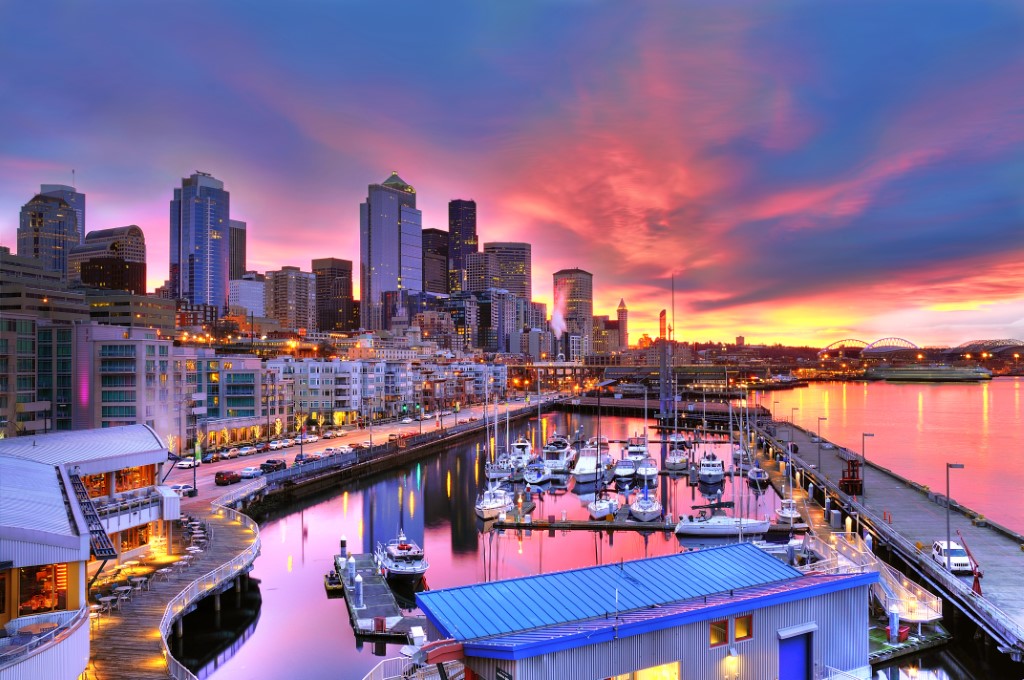 Located outside of Seattle is the beautiful Olympic National Park. If you’re visiting Seattle for a more extended period of time and can take a day trip, this is the perfect place to go. You’ll even be able to see the breathtaking Mount Olympus up close. 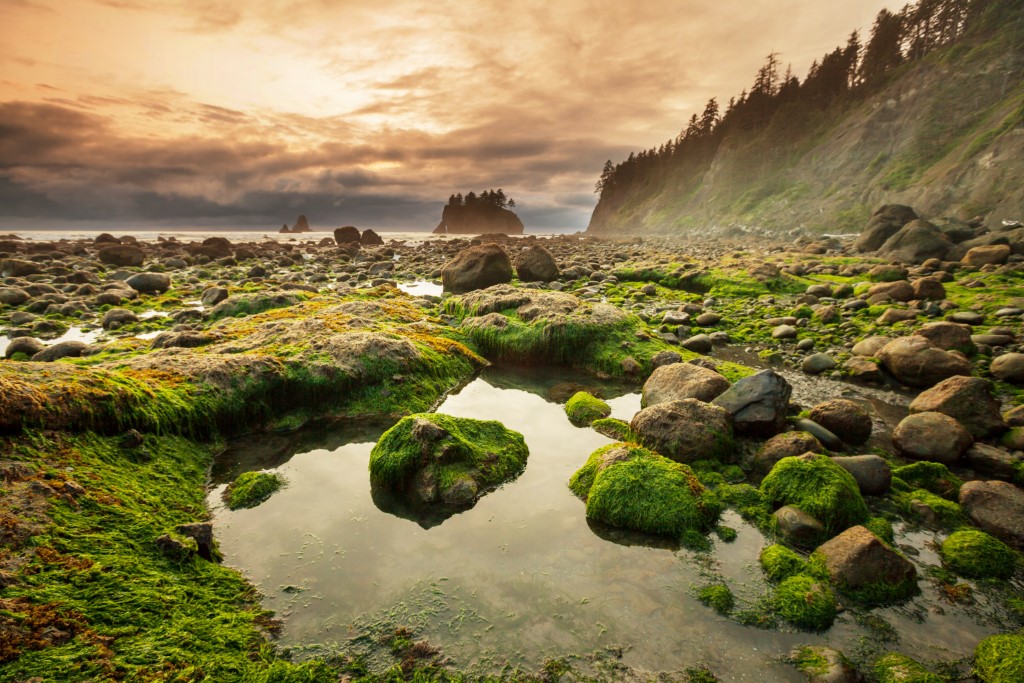 Get a behind the scenes look at the thriving cannabis industry in Seattle on this guided tour.

The perfect book store in Seattle is the Elliott Bay Book Company. This bookshop, in particular, hosts lots of community events and tends to host authors often too! Shopping here is the perfect way to support a local business.

Pioneer Square is an artsy neighborhood in Seattle. It dates back to the nineteenth century, which can be seen through the architecture there. Throughout this area, you can find great bars, galleries, restaurants, and more.

For an exciting adventure, go below and take an underground walking tour that showcases three passageways built in the late 1800’s. 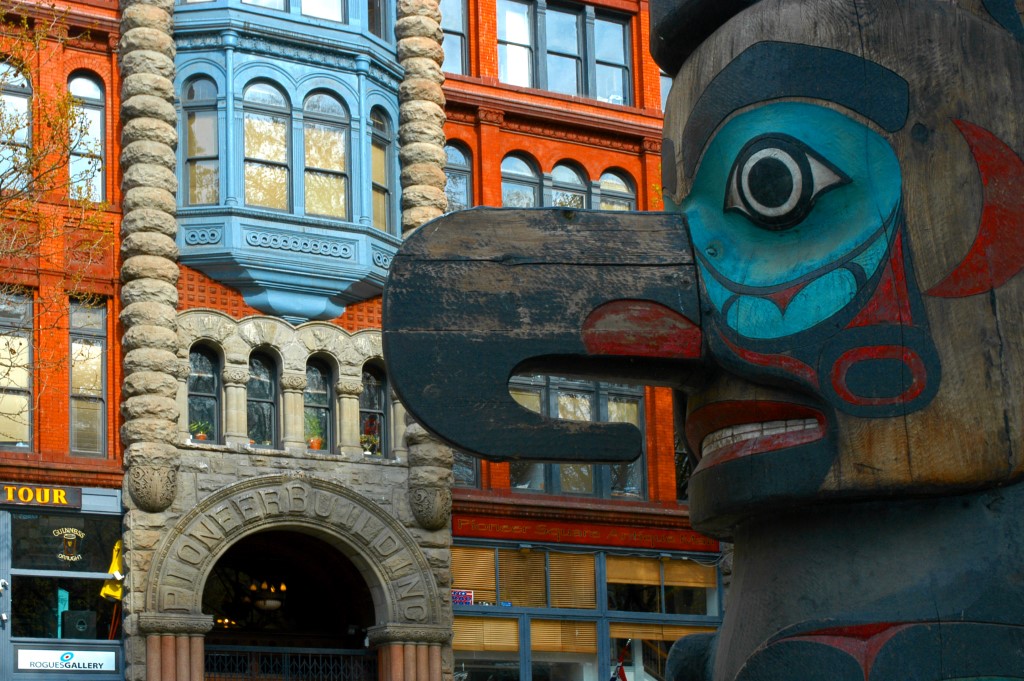 For a relaxing time, head to Golden Gardens Park. It’s filled with lots of great hiking trails so that you can get some exercise while visiting Seattle. This park is also the perfect place to go for a picnic!

There’s no better way to support locals than by visiting the Fremont Sunday Market. It prides itself in being European-style and features tons of local vendors selling food, art, souvenirs, clothing, and more.

34. Attend a performance at the Seattle Opera

Seeing a performance by the Seattle Opera is a great way to spend a night out in Seattle. It’s been a Seattle staple since the twentieth century. Be sure to purchase tickets online in advance, or they can get more expensive or even sell out.

35. Relax at the Japanese Garden in Washington Park

The Seattle Japanese Garden is the perfect escape from the city of Seattle! Seriously, you’ll be in it, and you’ll forget you’re even in a city because it’s a tranquil sanctuary. It’s filled with walking paths so you can explore flora and fauna. 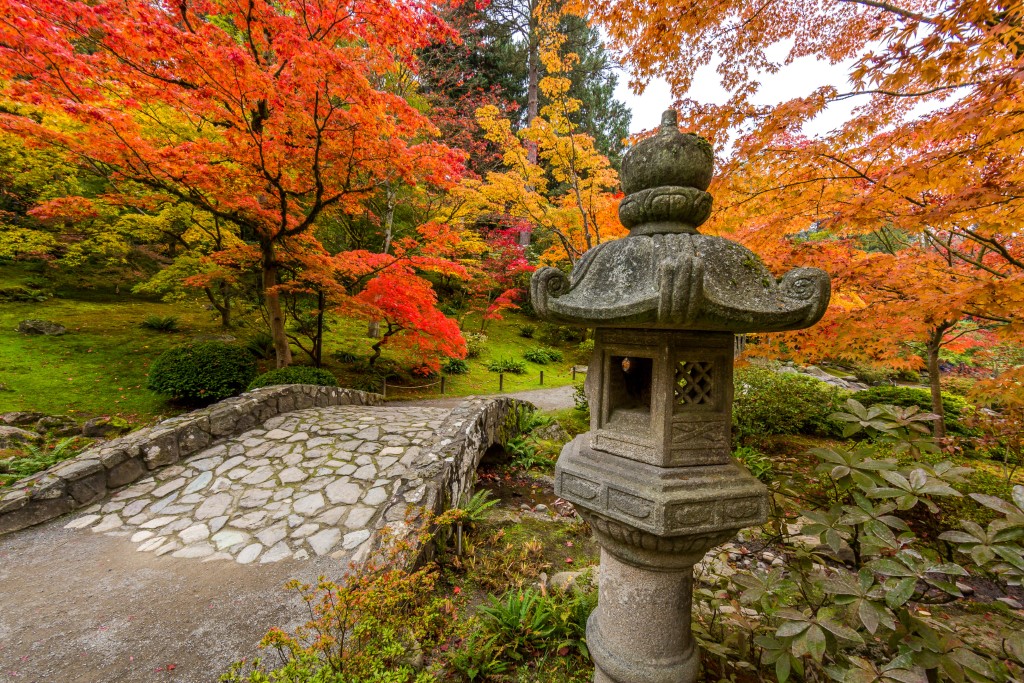 Stop by Dahlia Bakery for this famous dessert that is made with a coconut crust, coconut cream filling, whipped cream, and toasted coconut. 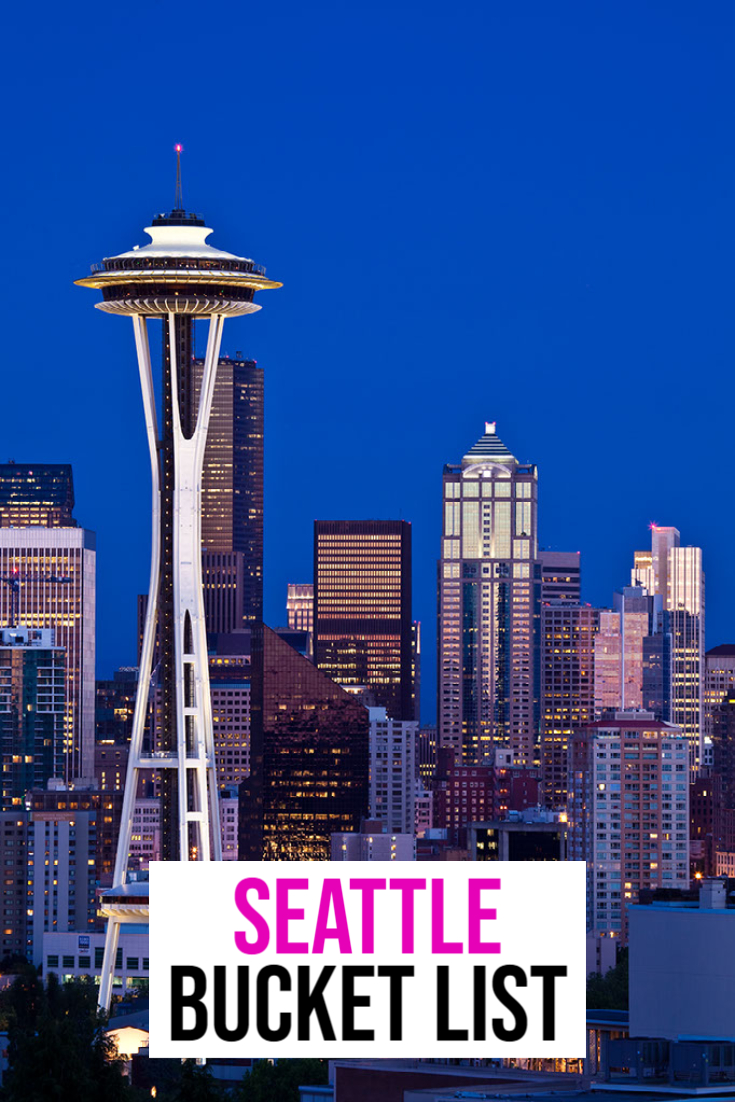 This article has affiliate links to products and services we love, which we may make commission from.